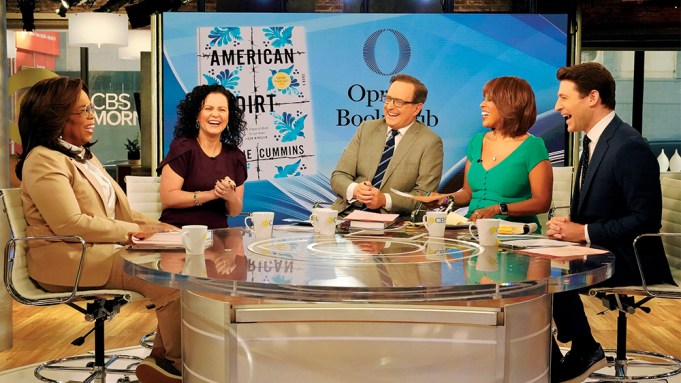 Vargas, a journalist and activist who immigrated to the U.S. from the Philippines as a child, was one of many writers — the letter attracted 138 signatories from the literary world — who asked Winfrey to rescind her selection of “American Dirt.” The novel, written by a woman who identifies as white and Latina and about a mother and son fleeing violence trying to enter the U.S. at the border with Mexico, has been widely criticized for a condescending treatment of race. And Winfrey’s inclusion of it has helped to kick off a press cycle as negative as the star has endured in memory.

Winfrey is at once facing down the “American Dirt” scandal and mounting criticism over her decision to withdraw from a documentary about sexual assault allegations against Russell Simmons, a film that had been intended to be distributed on Apple TV Plus as part of her deal there (the film eventually was bought to be distributed on HBO Max). In tandem, the two events have placed on the defensive a star adept at blazing her own trail. But enlisting her closest media allies — Gayle King of CBS News first among them — to bat back criticism, Winfrey strides on.

“On the Record,” a documentary directed by Kirby Dick and Amy Ziering, lost Winfrey’s endorsement — and her producer credit — very late in the process, when shortly before the film’s Sundance debut, Winfrey determined that the stories of Simmons’ accusers had “inconsistencies” unaddressed by the film. On a Jan. 21 CBS News interview with King and her “This Morning” co-hosts, Winfrey acknowledged that Simmons had pressured her publicly and privately to step away from the film, but stated she felt she had done “the right thing” in spite of that pressure and not because of it. (Simmons denies all allegations made by the film.) The film lost its Apple distribution — making it the second of two Winfrey-branded products under her Apple deal, along with an episode of “Oprah’s Book Club” focused on “American Dirt”— to create a headache rather than a halo for the tech giant.

No shortage of evidence indicates Winfrey’s commitment to the film prior to her sudden withdrawal. Numerous insiders close to the project tell Variety that a month before Harpo executives saw the final cut of “On the Record” last October, Winfrey screened a version of the film and sent it to artist John Legend, with the hope that he would contribute an end credits song. Legend fully supported the accusers in the film but passed on the opportunity, two people familiar with his thinking said, feeling it was more appropriate for a woman of color to produce the song, given the message of the film. Original songs in hard-hitting and topical docs like “On the Record” — such as Lady Gaga’s “Til It Happens to You” from Ziering and Dick’s film “The Hunting Ground,” and Melissa Etheridge’s Academy Award-winning “I Need to Wake Up” from “An Inconvenient Truth” — often become front-runners in the Oscars race. The producers wound up securing a previously unreleased track from Lauryn Hill for the end credits.

Winfrey declined through a spokesperson to comment for this story. But a representative confirmed that the mogul reached out to Legend in the fall and he passed on creating a song for the doc. Representatives for Legend and Apple declined to comment.

Legend was already indirectly involved in “On The Record.” The Grammy winner was a prospective artist that lead accuser Drew Dixon attempted to sign to Arista Records nearly 20 years ago. Dixon arranged an audition for Legend and his full band for label boss LA Reid, who declined to attend after Dixon refused several advances to be intimate with the mogul, she says. Reid has consistently denied any sexual harassment. She also attempted to sign a young Kanye West at Arista, Dixon says in the doc, and in public tirade Reid dismissed her suggestion as “embarrassing” while West sat in the label’s lobby.

Later in her Jan. 21 CBS appearance, joined by Cummins, Winfrey announced that the Apple program about “American Dirt” would be filmed in some part at the U.S.-Mexico border. The imprimatur, in conjunction with hype the novel had already received, helped propel the book to the highest echelon of the Amazon charts. The novel later debuted on the New York Times best-seller list at No. 1, with BookScan numbers indicating that in the week of Winfrey’s announcement, it was outpacing the second-place novel, Delia Owens’ “Where the Crawdads Sing,” by a 2-to-1 margin, selling nearly 50,000 copies.

But there were notes of warning even from the earliest moments of Winfrey’s alliance with Cummins: CBS anchor King said on air that there was “a little bit of
haterade” against Cummins, alluding to an early New York Times review questioning the uncomplicated and flat manner in which she described her characters. The open letter, published Jan. 29, asked Winfrey to pull her support for the novel entirely, noting: “‘American Dirt’ has not been imagined well nor responsibly, nor has it been effectively researched. The book is widely and strongly believed to be exploitative, oversimplified and ill-informed.”

Winfrey had, on Jan. 26, placed on her book club’s Instagram a video in which she said, “It has become clear to me from the outpouring of very passionate opinion that this selection has struck a deeper chord,” and promised a “deeper, more substantive discussion” taking on the idea of who has the right to tell what story. (“The taping is going forward,” says a spokesperson for Winfrey of the “Book Club” episode. “We have not announced specific plans for the taping. It will happen in February and air on the service in March.”) Winfrey’s endorsement acted as an accelerant to sales and to criticism alike; Flatiron Books, Cummins’ publisher, canceled the author’s tour, citing death threats. In a statement, the literary human rights organization PEN America said, “As defenders of freedom of expression, we categorically reject rigid rules about who has the right to tell which stories.”

Vastly more benign but still new for a generally Teflon celebrity have been the critiques of her judgment. “Oprah has demonstrated a lack of fluency and a lack of rigor in this conversation. Doubling down on this book is insulting,” says Vanessa Angélica Villarreal, an award-winning poet and a signatory to the letter. But Villarreal noted the totemic force of Oprah’s list: “Oprah’s Book Club has the power to put a book into our collective memory. I care about which books get remembered 100 years from now. It would be a shame to have a book that does not deserve that place when there have been so many voices, so many Latinx writers, who have embodied experiences.”

This contretemps has exposed issues of privilege and race in publishing that had little at all to do with Winfrey: among them, for instance, that Cummins’s publisher had celebrated her success with a floral arrangement designed to look like barbed wire. Cummins’s publisher and the writer herself could appear, at best, cluelessly trivializing of the immigrant experience “American Dirt” purported to capture. But Winfrey’s team made unforced errors of its own, too. The Mexican novelist Valeria Luiselli, who has worked with people seeking asylum, tweeted that Winfrey’s producers “asked me if I could give them the contact of any ‘illegal people’ that I’ve worked with, so they could talk to them. The conversation ended there.”

Winfrey is now stuck in this conversation. Her daily talk show, which ended in 2011, was a massive megaphone both for communicating what she wanted to communicate and in changing the conversation. Bound to produce something about a novel that’s both a hit and politically divisive, Winfrey will still be talking about “American Dirt” and issues of representation in March — although perhaps not in the tone or tenor she could have hoped for when reviving her book club for Apple.

As a personality whose rousing speech at the Golden Globes just two years ago led some to call on her to run for president, Winfrey has surfed cultural waves with élan until this moment. Indeed, that speech addressed the #MeToo movement, which is at the center of “On the Record,” and matters of race and representation in entertainment, similarly central to the arguments around “American Dirt.” But Winfrey is now disengaged from the cut-and-thrust that happened on her daily talk show as the nature of public discourse has changed — even as her power to sell remains undiminished.

Yet Winfrey’s been here previously and survived. “She’s a pretty savvy businesswoman, and she’s been a target before,” says media consultant Brad Adgate. “Anyone of that high a profile will make missteps. She can withstand any controversy there is — when OWN launched, everyone talked about how dysfunctional it was. She turned it around, and it’s not a topic anymore. This may be more serious than some other stories, but advertisers like her, and she has millions and millions of fans who support her.”

Even some of her critics remain hopeful. “When we look back,” says Vargas, “people are going to look at this as a real moment for the publishing industry specifically.” And, perhaps even more specifically, a real moment for Winfrey — one in which her Apple special will be scrutinized with care along lines the host may never have expected, and could as easily win over skeptical audiences as alienate those who don’t trust her judgment. “For me, signing this letter meant being a part of this conversation with this American icon,” says Vargas, “being a part of this conversation about who gets to tell what story. And I know Oprah Winfrey takes that conversation very, very seriously.”