Continue to Variety SKIP AD
You will be redirected back to your article in seconds
Jul 1, 2020 6:00am PT 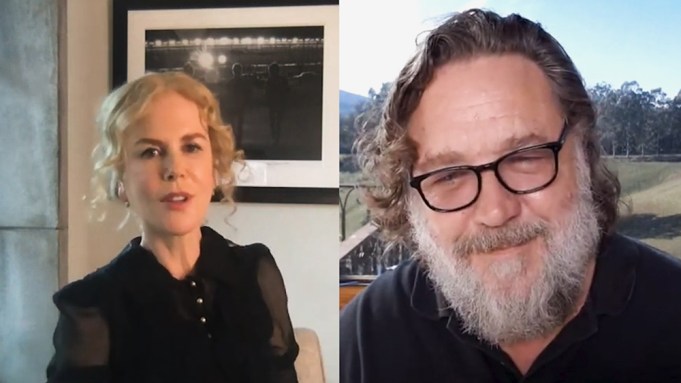 Russell Crowe came to prestige television for the first time this season with “The Loudest Voice,” a limited series about the life of Fox News creator Roger Ailes. No stranger to the medium is his old friend Nicole Kidman, whose second season of “Big Little Lies” saw her storyline of domestic abuse resonate even after her abuser had died. They talked to each other over video chat for Variety’s Actors on Actors issue.

Russell Crowe: I have to be totally honest. I haven’t seen the second series yet. So my reference point is the first series. That’s some extremely fine writing.

Nicole Kidman: Liane [Moriarty] came up with a catalyst to get the second series going, this character of Mary Louise. Meryl Streep comes in playing my mother-in-law. And that’s my storyline. You’ll have to watch it.

Crowe: How many films have you done with Meryl Streep?

Kidman: Three. Well, count this as a film. And we just finished a film together. There’s a lot more to come.

Crowe: I’ve had maybe two conversations with her ever, but I think she’s so special. Tell me about working with Meryl Streep.

Kidman: She’s very similar to how we work, in the sense that she melts into it. Every take is different. She’s like quicksilver. You would love her. And having just worked with her back-to-back — I did “Big Little Lies” where she’s in the cardigan, and she’s my pious mother-in-law. And then we’ve just done a big musical together, which was the complete opposite of “Big Little Lies,” where we are singing and dancing and being absolutely ridiculous. It was called “The Prom,” and Ryan Murphy directed it. We still have three more days to shoot.

Crowe: It’s a different director, you said, for the second series?

Kidman: Yeah. Jean-Marc Vallée was directing “Sharp Objects” with Amy Adams, and he was exhausted. It’s a huge feat to direct those seven hours. Because you, on “Loudest Voice,” had how many directors?

Kidman: I’ve only ever done limited series with one director. So I don’t know the idea of a different director coming in and directing a couple of episodes. I just finished another series [“The Undoing”], and that was Susanne Bier. And she directed all six hours.

Crowe: I don’t see how anybody can go into a series like that and be comfortable with directors coming and going. It’s a kink in the parabola. It’s not necessarily great. It can cross over work that you’ve done earlier. Because the next person coming in isn’t seeing things in the same way.

Kidman: Is that what happened for you on “Loudest Voice”?

Crowe: I’m just saying as an observation. And coming from a film perspective where you get on the train with one person. To then be in a television situation, that long schedule that you’re going to shoot over many months. To be changing perspectives, I didn’t necessarily think it was the greatest way to do it.

And I look at something like “Big Little Lies,” and I see the consistency. It’s a seven-hour movie. It’s not serialized TV in the way that is traditional, where directors coming and going is fine. This is stuff where you’re telling a story of a certain arc. Anyway, it’s fine. I enjoyed working with all the individual directors. But a single director is the preferred choice from my perspective.

Kidman: Mine too. So, that character you created with Roger Ailes — a lot of it falls on the actor, right? The whole arc of it. How do you do that?

Crowe: A lot of that has to be seeded at the beginning. And then you have to make sure that the directors to come are in that same loop. I had a funny moment with Stephen Frears, who was a wonderful fellow and an exceptional director. He came in to direct Episode 6. He was asking for a certain thing to happen. And I said, “Stephen, that can’t happen now because in Episode 2, such-and-such went on. And Episode 4, there was a blah, blah. In 5, we confirmed that. So now this is the sixth bit of the story. What you’re asking for can’t happen.” And Stephen, in his wonderfully dry English tone, said: “Well, Russell, you have me at a disadvantage, because you have read the script.” I’d love to do an actual movie with Stephen. He was wonderful.

We haven’t talked about your character and that journey, because that was pretty harsh to watch, baby. Talk to me a little bit about where you even begin with understanding her.

Kidman: Ultimately [the relationship between Celeste and Perry] is based in this love. And the sexuality between them, which is at times good, and loving, and tender. And then things go awry, and it starts to snowball out of control. That was really important to me, because so much of the relationships in terms of domestic abuse, you don’t see a lot of the good times. It was about focusing on: What are the good times? Because that’s what’s keeping me here. To have the chance to play that with all its complication, I was amazed that they let me do it that way. Because a lot of times it gets glossed over.

Did you find having the time to explore the character and still have a really strong narrative was glorious? Did you like that? I love that.

Crowe: I really did. Because you got to be able to show [Ailes] ebullient and why people like working with him. Instead of this one thing which might say, “This man is a monster.” Ultimately, his behaviors are abhorrent and ridiculous. And he gets his comeuppance. But we’re showing how he created the energy around him that allowed him to get away with whatever he wanted to do.

Kidman: I loved that you could see the relationship he had with his wife, which you and Sienna [Miller] created. There’s very few men that can love a woman on-screen. We’ve seen you do it in things like “Gladiator”; when you love, you love. You felt that love on-screen for her. You saw Roger Ailes capable of being this husband, and loving his child. That part of him that you would never get to see if you didn’t have that amount of time to explore him. That was important.

Crowe: I was really lucky with that cast. Having Sienna play that role. Annabelle Wallis, Aleksa Palladino, Naomi [Watts]: The first time I worked with her, it was a TV thing, “Brides of Christ.” And I came in and did some wacky Catholic boy freaking out about this and that; I think I had to inform the Hail Mary I was ejaculating and losing my virginity. And we’ve been friends for so long. And then finally, to actually be on the job together. It was a really cool moment. It was the same as being on a gig with you. It’s unbelievable. If you think back to where we all started from and our aspiration, it’s inconceivable, Nicole. You and me hanging out in Darlinghurst; it’s inconceivable that we’ve had the careers that we’ve had. What the f–k happened with that? Me, Naomi, Hugh [Jackman], this whole generation of people that are directly in touch or vaguely connected. It is stunning.

Kidman: And all still friends.

Crowe: And all still working.

Kidman: I remember when you were preparing for Roger Ailes, you were compiling all the information about him. How did you do that?

Crowe: Well, that’s a funny thing. Because you tend to take advantage of situations that come up. You were in New York for Hugh’s birthday party, right?

Kidman: Yes, I was there.

Crowe: And Ivanka [Trump] came in. So that gave me the opportunity to have a very long conversation with Ivanka’s husband.

Crowe: And he had a very direct relationship with Roger over their presidential campaign. Phone calls every Sunday. So it gave me that contemporary insight that the book could not give me.

Kidman: I had no idea you met [Jared Kushner] at that party.

Crowe: Nobody else was talking to him.

Kidman: Stop. You read the book obviously. I remember when you were delving in and out.

Crowe: That’s the thing about Gabriel Sherman’s book — at a certain point, it’s like a singular perspective. It still functionally has a bias. So now I’ve got to try and find the other side of the story. When you’re about to play a character, do you find that things, they come to you? Do you find that as an actor … it’s not necessarily osmosis, but there’s a thing that happens where the information you need somehow seems to —

Kidman: Arrive. My antennae are alert in a different way. I’ll find one thing that will propel me forward. Because when I start, I’m almost like a donkey who’s being pulled. I can be digging in right up until the day before. I’ve literally called up and said, “I’m not the right person for this, and you gotta let me out.” And I don’t know how.

Crowe: Tell me about “The Prom.” The experience of making it, because just as an aside in my experience when the project that you’re on has a lot of music involved, it’s so much fun. Everything is more fun, the regular energy of a film is sort of supercharged or something.

Kidman: This was a comedy as well, so I haven’t done a comedy for so long. And to watch Meryl Streep and James Corden do their thing together, and watch Ryan [Murphy]. This is the man that created “Glee,” come in and go and sort of almost put sparkle into the room.

I was terrified, I was doing Fosse dancing. So Fosse dancing is not my dance that I’m was educated or trained in. So I was like, “I’m so out of my comfort zone?” But would you love to do another musical?

Kidman: No, I’m not a singer. I will act through my song. You’re a singer. I will sing as a character, but I’m never going to get up and sing. That’s just not my natural expression. But as soon as I can be in character, I can sing. I have to find the character first.

When are we going to do a play together?

Crowe: That would be interesting. What do you want to do? “Who’s Afraid of Virginia Woolf”?

Kidman: Yes. I want to do a play with you. Come on, please.

Crowe: What was the play you did in England? I went to see it and it was so successful.

Crowe: I was there your first week. We were backstage, we were talking and we’d hang out. Tom [Cruise] was there.

Kidman: And then did we go to the Ivy?

Crowe: We did. What’s your plan today?

Kidman: It’s nighttime here. I’m going to go off and have some dinner with my kids and Keith [Urban]. He’s actually doing recording.

Crowe: When is the last time you wore a cowboy hat?

Kidman: I haven’t worn a cowboy hat in a while.

Crowe: When was the last time you sang a country song?

Crowe: I thought so.