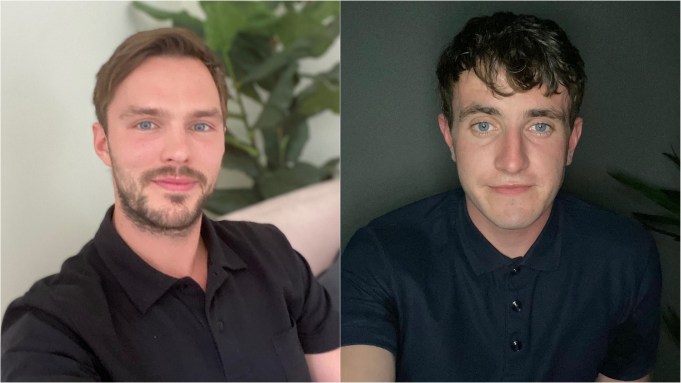 Paul Mescal is one of the TV season’s breakouts as Connell, the lovelorn young man whose romance with a classmate follows an uneven path on “Normal People.” On “The Great,” Nicholas Hoult is also caught in a bad romance — tormenting his wife, Empress Catherine II of Russia, in his role as Emperor Peter III. They talked to each other over video chat for Variety‘s Actors on Actors issue.

Paul Mescal: Nick, you’re a legend. We met in Pasadena. Do you remember that? You definitely don’t.

Nicholas Hoult: At the upfronts?

Mescal: No, the TCAs. You were doing press for “The Great” with Hulu, and I remember we were in the same room. I remember I got into the lift, and I was like, “F–k, that’s Nick Hoult.” And here we are, chatting about acting.

I finished “The Great” over the weekend. You appear to be a really genuine, nice human being, yet Peter — one might argue — is not. I’m curious about how you approach playing an antagonistic character like that.

Hoult: From an outside point of view, I can obviously see that he is the antagonist of the story, and he does a lot of terrible things. But then I try not to, in my mind, view him as that too much. I think with Tony McNamara’s writing, the brilliant thing is he gives you this character, but he gradually peels away a few layers where you start to go, “OK, there are reasons for the way he is.” Peter is a man-child. He’s just living in this bubble. I think the one redeemable thing, apart from his love of food, is his like of stream of consciousness.

Hoult: It’s really fun. I found the time between “Action” and “Cut,” doing the scene is so much fun because of the character. Tony gives you the perfect framework and dialogue to do it, but then there’s nothing you can’t do that would be wrong. When you’re playing emotions within a scene, are you completely within a character? You know there’s people that, they use their own memories is what I’m trying to say, and use those to project emotions. Do you do that or not?

Mescal: I’m not saying that I never will, but it wouldn’t be something that would interest me. I think you’re doing the character a disservice if you’re trying to put your stuff onto it.

Hoult: I’m in the same boat. I try not to use my own memories, because I feel as though then it cheapens my memories. Once you got this part, did you go back and read the book again? Was it very influential in terms of making the character?

Mescal: I would normally read the scenes in the book again the morning that we would be shooting something, because the trick with “Normal People” was that the book’s got all of these massive interior monologues. It was trying to place those inner monologues, root them in the characters, so then when you are playing the scenes, you’re praying to God it’s going to percolate through.

Hoult: I haven’t figured out how I go about the process of getting into characters, so I’m always wanting to learn from people. Would you put the notes onto your script?

Mescal: I’m not the most neat of workers, so I would just reread and reread the book so that it would percolate its way in. I did write page references, but — I don’t know if it’s similar for you — when you start a job, you have all these great intentions. Suddenly when you’re six, seven, eight weeks in, and exhaustion starts to hit, your best intentions can be taken over by adrenaline and fatigue. And I think that’s useful as well.

Hoult: There’s times when you do a scene and go, “That wasn’t working — terrible.” Then you end up seeing it and you go, “Oh, it really works — it’s a great scene.” Or the reverse happens. Particularly in terms of working with Daisy [Edgar-Jones], would you both occasionally be like, “I feel like we got it”? I know that working with Elle [Fanning], there would be times that we felt like we both got into a rhythm and we felt like, that’s the take.

Mescal: The longer me and Daisy got into the shoot, there was a real shorthand. The discussions would become fewer and fewer, and we would just have a weird understanding that this is the way the scene played, without talking to each other too much. Conversations around character can sometimes dilute character, if you overexplain. I think what Daisy has in absolute abundance is not only talent, but she’s got an incredible instinct with character, and she is an incredibly generous actor. We got into a rhythm with it.

Hoult: Connell’s chain, is that something that you wear in real life?

Mescal: No, the chain is actually in the book. At the start, when the chain had this cult following, you feel like you lose slight ownership of it. Then it becomes its own thing. Recently I was like, “OK, what can I do to use this in some way that is beneficial?” I’m auctioning off one of the chains that I wear in real life that’s similar to Connell’s for a charity that deals with suicide and mental health, themes that are quite present in the show. It’s nuts. It’s raised like 53,000 euros in like a week, and that’s suddenly when I feel like that is the real positive of having people who are interested in you, and your work, and what you have to say. There can be real good that comes out of that, and if it’s harnessed in the wrong way, real negativity. But yeah, that’s the craft.