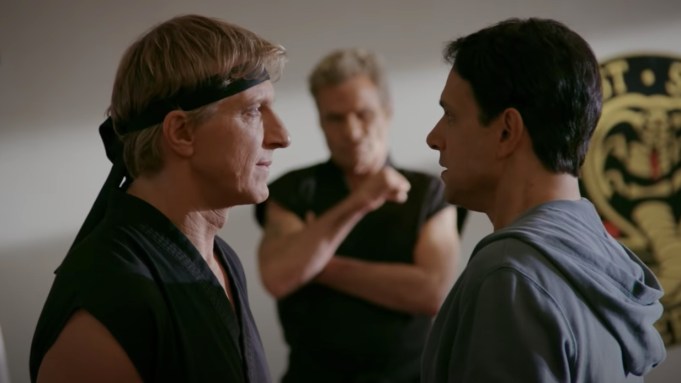 Get ready to go into a new year in fighting shape: Netflix is launching the third season of “Cobra Kai” a week earlier than originally planned, now set to drop all episodes on Jan. 1.

The day after the season streams, the cast of “Cobra Kai” will appear on “The Netflix Afterparty” to talk about the latest season of their martial arts comedy alongside hosts David Spade, Fortune Feimster and London Hughes.

“Cobra Kai” is the continuation series from the 1980 film franchise “The Karate Kid,” starring Ralph Macchio and William Zabka in their respective reprised roles of Daniel LaRusso and Johnny Lawrence. Now adults, Daniel is searching for answers about his past while Johnny seeks redemption for things he did in his own past. The once-rivals now have to team up to save the dojo from John Kreese (Martin Kove), who  has taken over as sensei with his infamous “no mercy” philosophy.

The third season also finds everyone reeling from the aftermath of the violent brawl between dojos, which left Miguel (Xolo Maridueña) in a coma. The stakes in its upcoming season have never been higher, with, as the streamer puts it, the soul of the Valley at stake, and the fate of every student and sensei hanging in the balance.

Although Netflix previously dropped the first two seasons of “Cobra Kai” on their platform, that was a second-run stream after the series originated on YouTube Premium. Now, with its third season and beyond (the show has already been renewed for Season 4), it is a Netflix original.