‘I Am Not Okay With This’ Co-Creator on ‘Carrie’ Inspiration, Powers as ‘Creative Metaphor’ 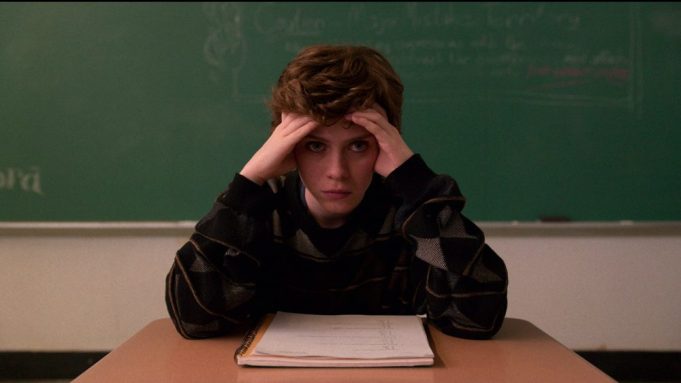 SPOILER ALERT: Do not read if you have not yet watched “I Am Not Okay With This,” streaming now on Netflix.

A teenage girl, seemingly in shock, walks down a dark, desolate street wearing a dress covered in blood, with police sirens wailing in the background. “Dear Diary,” her voiceover comes in, a few seconds into the walk, “Go f— yourself.”

And so begins Netflix’s seven-episode adaptation of “I Am Not Okay With This,” based on Charles Forsman’s 2017 graphic novel of the same name. If you don’t know anything about the story, such a visceral opening image likely bring thoughts of trauma and tragedy immediately to your mind; if you know other genre projects before this one, Brian De Palma’s 1976 feature film adaptation of Stephen King’s “Carrie” might also come to mind. Both of those things were intentional for series co-creators Jonathan Entwistle (“The End of the F***ing World”), who also directed, and playwright Christy Hall.

“You have these prized female characters like Roald Dahl’s Matilda, Stephen King’s Carrie, the very beloved Eleven from ‘Stranger Things,'” Hall tells Variety. “We knew we were entering into the sandbox of these treasured characters. We didn’t want to be afraid of leaning into these treasured, iconic, visceral images that we had all grown up with. Simultaneously we always wanted Sydney to feel unique in her own way — that she is her own version of this celebrated landscape.”

Sydney (Sophia Lillis) is that teenage girl whose origin story “I Am Not Okay With This” is telling. Similar to the titular Carrie, the blood on her was doused on her at a school dance. But it was not poured from rafters by bullies. Instead, it poured from the school bully (Richard Ellis), whose head Sydney made explode when he read her diary aloud at the event. It is an inciting incident that is teased in the opening seconds of the show, but isn’t depicted until the season finale.

“We always really loved the idea of a slow burn for this one,” Hall explains. “A lot of it really, truly was inspired by the original IP of, how do we keep this contained for as long as humanly possible in order to make an expansion that much more exciting?”

The show centers on Sydney’s struggles with a lot of heavy emotions on top of such regular day-to-day adolescent issues as schoolwork. Her father recently, supposedly, killed himself after struggling with demons of his own that Sydney would later learn were telekinetic powers not unlike the ones she has been developing. This leaves Sydney to at times step in as a parental figure for her younger brother and butt heads with her now single mother (Kathleen Rose Perkins). On top of that, she is sorting through complicated sexual and romantic feelings about herself (concerns over masturbation, for example) and her longtime friend Dina (Sofia Bryant).

Sydney is also developing the aforementioned powers that start with her making Dina’s boyfriend’s nose bleed when he upsets her in a diner, but over the course of the season grow into larger acts as she doesn’t know how to control herself.

“I have always seen the powers as a creative metaphor for what it just simply feels like to grow up, and every single thing is under that umbrella,” Hall says. “At the end of the day, it’s a story about a young girl just trying to grow up. And the powers themselves — her abilities — are just a really heightened reflection of how every human feels, male and female.”

Hall admits that centering such a story on a female protagonist is exciting because it has been historically less common to see young women in this way. But while Sydney is often embarrassed by what she is feeling, it is her male friend Stanley (Wyatt Oleff) who is “a little further evolved in that process of knowing who he is and he’s unapologetic about being that person,” she notes. Through those two characters, the show endeavored to portray the “duality” and evolution of complicated adolescent feelings.

“I do think the rise and fall of emotion — the powerlessness I felt with my emotions when it comes to starting your period — there’s nothing more wild and interesting and untethered than a female girl when it comes to the power and depth with which we can feel our emotions,” Hall explains. “So I really loved the idea that her learning arc is learning how to actually be able to harness what she’s feeling and be in command of it and take a breath and calm down and become more of a master of what she’s feeling. Her powers are tethered to her emotions, or her emotions exacerbate what’s going on inside of her, and that’s a huge part of what, ultimately, is her arc because the two are connected.”

The series version of “I Am Not Okay With This” takes its cues from the original source material in characters and, at least in the beginning, point of view. It opens with and carries Sydney’s perspective all the way through its first seven episodes, most notably through the use of her “Dear Diary” voiceover motif.

“As a female artist, creative, writer, it excited me that there was room in the space to really get inside Sydney’s head more. We wanted to start with her and her very myopic idea of the world and her very isolated idea of herself,” Hall says. But, “how much of what I wrote in my diary did I think was true and how much of it was actually true? What are the times Sydney’s lying to herself? What are the times she has a false view of her mother or Stan or Dina? Or even how you can waffle with your feelings because hormones are very untrustworthy. Maybe the way Sydney sees herself and so much of the complications she invites into her world is based on this very one-sided perspective.”

Being able to adapt the story for a new medium provided opportunity to expand in a few areas Hall felt were essential, such as Sydney’s relationship with her mother and with Dina.

“Sydney’s made a villain out of her mom when her mom’s actually on her side,” Hall notes. “When we see her from other points of views. I like that we had this female protagonist who could present as a bitch sometimes. She’s flawed, she’s not perfect, and to see her in other people’s points of view show sometimes maybe we are our own worst enemies.”

And when it comes to Dina, Hall says she “wanted Dina to be reflective of the really exciting complexities that female relationships can look like, and I wanted Dina to feel like the best friend we all wished we had.” Rather than portraying a female friendship in which the two young women were “pitted against each other for the attention of a boy,” Hall was interested in further complicating this one through “Sydney’s heart and the joy and pain of what she feels for Dina welling up inside of her,” which she notes is a more modern conversation to be had.

“I can speak for myself: I think when you’re navigating the challenges of puberty, I think everyone feels like a freak sometimes. I think everyone believes the thing going on inside of them is so embarrassing or so unthinkable that if you invited someone into what’s going on inside of you, you might be deemed unlovable or be cast out in society,” Hall says. “I think ultimately to grow up and not only discover who you are, but also to be the most unapologetically authentic version of yourself, I think we’re just setting down on Sydney at a time when those things seem utterly impossible.”