‘Hunters,’ ‘Plot Against America’ Bosses on Tackling Anti-Semitism in the Prism of Modern-Day America 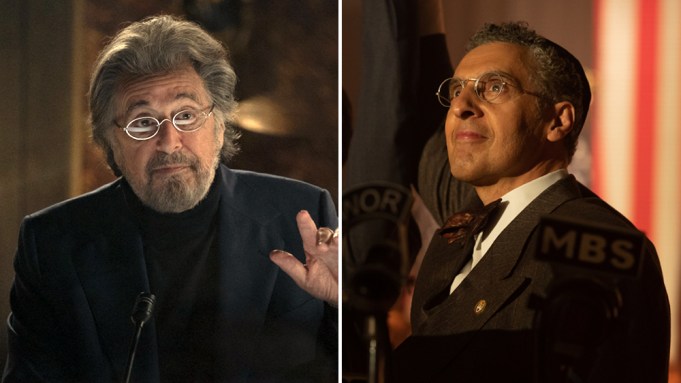 When David Weil was a teenager, he discovered a swastika painted on his high school lawn. When he was in college, he heard someone tell a joke about Jews belonging in ovens.

Weil, the creator and co-showrunner of Amazon Prime Video’s “Hunters” was subjected to plenty of “casual anti-Semitism” growing up in America, but as of late he has watched that hatred take an even more horrific turn. Over the last few years, the United States has experienced an increasing number of deadly attacks on synagogues and at neo-Nazi rallies. Concurrently, the entertainment industry has produced more films and television shows that include Nazi characters in their storytelling, addressing such hate-filled ideology through drama, humor and even comic book violence.

Tackling Nazis and anti-Semitism in a narrative setting is never easy — and is often divisive — but Weil and other creatives such as David Simon and Taika Waititi are setting out to remind viewers of atrocities and warn against history repeating itself.

“I think for a long time this anti-Semitism was kind of couched — people held it inside — but we’re seeing this expression of anti-Semitism and racism and xenophobia in incredibly violent ways. There’s an epidemic of this in our country and I think unfortunately ‘Hunters’ is timelier than ever before,” says Weil.

Weil funneled his childhood experiences, as well as stories his grandmother told him about the Holocaust into “Hunters,” which is primarily set in a fictionalized, stylized 1970s New York City and which follows a group of vigilante Nazi hunters led by Al Pacino’s Meyer Offerman. The titular hunters catch wind that Nazis are in America, planning a Fourth Reich, and set out to stop them by any means necessary.

But “Hunters” is just the latest in a slew of shows and films which place anti-Semitism and Nazism on screen.

Some shows are choosing to only include hints of such discussion. The upcoming third season of HBO’s “Westworld,” for example, features a World War II theme park setting in which Nazi flags flap against buildings, while Fox’s “Next” includes a single character (played by Michael Mosley) who is a former member of a neo-Nazi group. Other projects, from Amazon’s adaptation of “The Man in the High Castle” to Waititi’s 2019 feature film “Jojo Rabbit,” paint a more prominent picture.

Hollywood is clearly not prepared to let this disturbing trend of anti-Semitism and racism slide.

“Jojo Rabbit” took a comedic approach, crafting the Nazis as caricatures. Set during the last days of World War II, in Germany, the Waititi-directed picture depicts a young boy (Roman Griffin Davis) who is smitten with the ideas of Nazism and wants nothing more than to impress his imaginary friend Adolf Hitler (played by Waititi) by killing Jews. However, Jojo is only a little boy who wouldn’t even kill a rabbit, and when he discovers that his mother is hiding a young Jewish girl in the attic, Jojo slowly starts to realize the deception of the ideology onto which he held so tightly.

“The Man in the High Castle” takes a more dramatic approach, re-imagining a World War II that resulted in victory for the Nazis and their Axis power allies. Based on Philip K. Dick’s 1962 novel of the same name, the world in the series has become a much darker, more brutal place under Nazi control, epitomized by super villain SS officer John Smith (Rufus Sewell).

Similarly, HBO’s upcoming limited series “The Plot Against America,” based on the 2004 Philip Roth novel of the same name, is set in an alternate history. It ponders what 1940s America would have looked like if celebrated aviator and xenophobe Charles Lindbergh had accepted the G.O.P.’s offer to run for President against FDR — and won. The six-episode limited series charts the lives of a Jewish family in Newark, N.J., as the country adopts an isolationist policy during World War II, and micro-aggressions against Jewish people proliferate.

“It’s a story of an American dystopia,” explains creator David Simon. “It seems startlingly prescient in that it anticipates a politician who seizes upon a very simple message and is able to activate the worst fears and impulses of a significant number of Americans. He gets them to relinquish not only power, but some of the most essential bulwarks of self-governance.”

As Lindbergh’s thinly-veiled anti-Semitic ideology takes over, the central Levin family, led by Morgan Spector’s Herman and Zoe Kazan’s Elizabeth, are subjected to verbal and even physical abuse in public. Jews become viewed as “other,” despite the fact they are “assimilating so fast into American culture that it’s making your head spin” — which Simon says is eerily similar to the other-ing of different groups in today’s America.

“The reason to do the series today is not to settle the score of 1940 or to decide what America would have been under Charles Lindbergh, or to decide whether anti-Semitism could have ever achieved some sort of American gulag or American Holocaust for Jews here,” he says. “This is all allegorical to this moment. It’s not Lindbergh now, it’s Donald Trump. And it’s not Jews who are the most vulnerable cohorts among recent immigrant groups, it’s people with black and brown skin, people who are Muslims.”

Roth based the novel on his own childhood, and that element of grounding the narrative in real-life fear and real-life experience runs throughout the stories that tackle this time period and these difficult themes.

“Hunters,” Weil says, “became this quest to seek a vigilante justice, to don that vigilante cape myself, to shed light on crimes and truths, and continue this story in the face of so much [present day] anti-Semitism and Holocaust denial.”

As he got older, Weil admits he struggled with “that idea of birthright and legacy and responsibility” and wondered what he could do. The answer, for him, was a 10-episode drama that also tells stories within the concentration camps of Auschwitz and Buchenwald.

Although the show is littered with “brain matter flying into Jello salad,” Weil notes, he and co-showrunner Nikki Toscano approached the Holocaust story with authenticity and “as much reverence as possible.”

“We know that there was a lot of sadist behavior and torture that took place during the Holocaust and I don’t think we wanted to step on anybody’s real experience of that, which was why we decided to fictionalize stories from our fictional characters’ perspectives,” Toscano explains.

However, fictionalizing such hatred of Nazism and the horror of the Holocaust has never, and will never, be an easy task — nor one which comes without its fair share of critics. Simply showing a swastika onscreen can be triggering for audiences.

“Jojo Rabbit,” for which director Taika Waititi won an Oscar for adapted screenplay, for example, was met with some deeply unsympathetic reviews, particularly from across the pond, while Quentin Tarantino’s 2009 “Inglourious Basterds,” which, much like “Hunters,” centers on a group of Jews who seek brutal revenge against Nazis, faced questions about the way in which it played fast, loose and violent with Nazism.

Weil and Toscano were fully aware of how polarizing “Hunters” was likely to be from its inception, but rather than making them scared, the provocative nature of juxtaposing graphic violence and comedy with the Holocaust made them want to tell the story of Meyer and his band of a “real life Jew-per heroes,” as they are jokingly referred to in the series, all the more.

“Certainly it’s going to invite controversy — even selling the show was controversial,” says Weil. “Any time you portray the Holocaust or Nazis on screen, controversy is invited. To me there’s even more urgency to tell this story because of that.”

“Hunters” is streaming now on Amazon; “The Plot Against America” debuts March 16 on HBO.