Continue to Variety SKIP AD
You will be redirected back to your article in seconds
Mar 31, 2020 11:30am PT 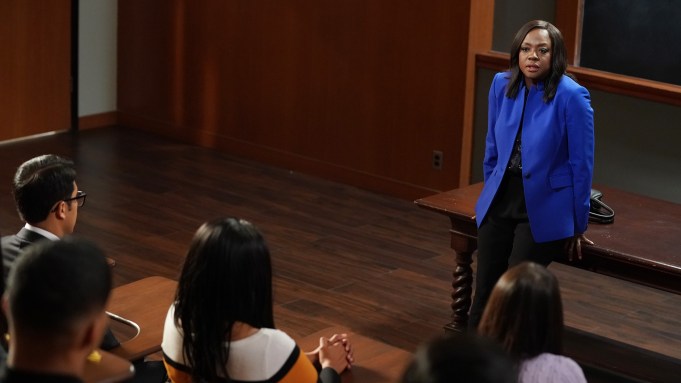 Viola Davis never wanted to be a TV character, but for the last six years much of her professional life has been devoted to being just that — the brilliant but often intimidating Annalise Keating on ABC and Shondaland’s “How To Get Away With Murder.”

Now, the show is wrapping up its six-season run with six more episodes beginning April 2 and ending May 14, and Davis, the rest of the “How To Get Away With Murder” cast and crew, and the audience who followed their twist-filled murder mysteries for the better part of the last decade will never be the same.

“I did not want a character that fit into the quote-end quote network TV parameters. I wanted to be more rooted in reality and in life, and more rooted in the complexity of what it means to live a life,” Davis tells Variety. “There are awesome actors on TV, but my issue in general with my profession in general — not all the time, just sometimes — is I never see myself. And when I say myself, I’m not just saying my hair and my skin, but me — who I am inside. I never see it, I never believe it. The reason why I love Shondaland is I think that they’re challenging a new audience — an audience of different races and sizes, people who are now shedding what’s been done in the past.”

Davis booked the role in 2014 after focusing on films (including “The Help”) for a few years. “I literally had to step out on faith,” she says of accepting the role. “The one thing that made me half-way believe it was they chose me. I think that was the first step. And then the second thing they did was they listened to me. They honored my voice.”

Showrunner Pete Nowalk had come up on Shondaland series “Grey’s Anatomy” and “Scandal” prior to launching “How To Get Away With Murder,” so he had a track record of boundary-breaking dramas with formidable female leads at the center of the story.

“We want to make things that we want to watch. If we’re proud of it, we want to watch it. And Pete shares this too because we all share the same DNA. That’s the level of success we look for,” executive producer Betsy Beers says. “There’s an integration between the kind of storytelling it is — which is very high stakes — and then these very realistic, emotional high stakes issues for characters. That particular marriage, I think, has always been tantamount in his brain.”

Nowalk developed a collaborative environment wherein he would have conversations with actors including Davis a couple of times throughout each season to ensure where character arcs were going made sense to the people who were portraying them. At times, certain elements were inspired by the actors, as well.

“They are a resource for me that I will really miss,” Nowalk says of his “How To Get Away With Murder” cast. “What’s cool about Annalise’s journey, and this comes from Viola, is that we’re meeting this woman who was really trying hard to fit in in so many ways and then rebelled against it. We talk about that at the end of the show; she has this one great last speech and it really comes from a lot of what Viola wanted, and it’s about, are we all just trying to be someone the world wants us to be or can we just be ourselves, whether that’s ugly or pretty or good or bad?”

Over the six seasons, “How To Get Away With Murder” featured stories about alcoholism, interracial relationships, gay marriage, HIV, the mass incarceration of black men and law enforcement corruption, all mixed in with murder mysteries that tested the characters’ morals and questioned if anyone, under the right circumstances, could be capable of violent action.

“There have been moments in absolutely each season,” Davis says, that she wants to linger with the audience long after the show fades to black for its final time. “Everything from taking the wig off to my sexuality and not putting a finger on that. Everything with Bonnie and her being a sex abuse survivor. Everything with Connor and Oliver and really getting a front row private seat into the day to day life of a gay couple. The cases and the interracial love affairs that have happened. And certainly some of the risk-taking in terms of scenes, like where I tell the kids to shoot me or where Bonnie is encouraging Frank to not shoot himself and I’m encouraging him to shoot himself.”

“The thing that always amazed me,” Beers says, “was that storytelling was becoming more nuanced and opened up the doors for discussions about different things — yet there was also this incredibly vital, entertaining, larger-than-life engine going on. The thing that I always thought was radical was that it was this incredibly inventive way of doing a legal show.”

Beers recalls that in development half a dozen years ago, the idea of telling a story non-linearly (where each season started with a murder and then jumped back in time to unfold the events that led up to and ultimately caused the crime) was something of a novel one in the format. But so was centering a series on a defense attorney.

“Without ever getting preachy or ever getting in the weeds about it, Pete managed to weave that idea of guilt or innocence obviously within the framework of cases but also within our characters’ lives,” she says.

Looking back on that now, though, Nowalk also hopes there is a broader message beyond the law on which the audience will eventually reflect.

“Cicely Tyson was saying something that I think, subconsciously, I want the show to say. She was saying that if someone tries to put you down, you have to find it in yourself to fight back and make them know that you’re a threat to them. Annalise — and all of the characters — are fighting against the mainstream feeling where you have to fit in and follow these rules and how dare anyone tell you that?” he says.

In addition to its complex storytelling structure, the show broke ground in the industry when Davis won the lead drama actress Emmy in 2015. It was her first-ever nomination, let alone win, and she became the first African American to take that trophy. She was later nominated three more times at that ceremony, twice at the Golden Globes, and she won two SAG Awards. Guest stars Tyson and Glynn Turman also scored Emmy nominations over the years, including for the penultimate season, at the 2019 ceremony.

In preparing to say goodbye to these characters and this world, Nowalk thought a lot about some of his favorite previous series finales, such as “The Sopranos.” What marks them his favorites is the fact that “they sit with you for a long time,” he explains. “I’m not comparing this show to ‘The Sopranos,’ but for people who want to think about it after it’s over, there’s room for them to do that and to fill in gaps, so it’s satisfying, but it’s also not explaining everything.”

Although he has been accustomed to ending every season thus far on a cliffhanger, he knew he couldn’t do that to the audience when there wouldn’t be another episode around the corner in just a few months. “As much as there is fun murder on the show, Annalise is such an emotional person that I really wanted to give her a proper end and feel like we finished telling the story about this time in her life, which hasn’t been that long,” he says.

“We have a big twist coming up in the last three episodes that sort of ties back to the beginning in this major way,” he continues, but “it was definitely key to make sure at least the major loose ends were wrapped up by the end. For any character who was a big part of the show, I really hope we provided closure for them or some hint as to where they’re going.”

The finale, Beers says, is “a valentine to the whole show.” Although so much of the challenge of wrapping up such a complex series is “making sure that everybody gets their due,” she acknowledges, the show as always been “novelistic [in how] one character bounces off another and there’s this magical stew thing [Pete] does where things all fall into place in way that we didn’t know we engineered.”

For Davis, what was most important about the way Annalise’s journey was wrapped up was that it included “a stripping away of all of the facades, the layers,” she says. And she reveals that will happen: “What you get in the final episode is really more authentically who she is. And it is that journey and ultimately that character that I’ve always wanted to see on TV.”

Davis has said that she feels that Annalise is one of the greatest characters on television for the way she has been written so boldly. But portraying such a woman didn’t always come easily. In the beginning, she recalls comments from people who thought she was miscast because they had preconceived notions about what a leading lady — especially one who embraced her sexuality — should look like. Portraying sexual scenes was also something she notes was hard — and she credits “the great actors that I worked with” for helping her push past the things that made her uncomfortable.

“The minute I walked onto the stage as Annalise Keating, they accepted it 100%. That’s all I needed,” she says. “In TV everything moves so fast, there’s no time to doubt yourself, there’s no time to wallow in imposter syndrome, you simply have to do it. You have to make that bold choice. TV and Annalise has taught me it’s like jumping out of a plane: you jump, you’re out of the plane, you’re flying, you’ve got to trust the parachute is going to come up, you’ve got to trust your partner. I conquered a fear with Annalise, and I lived through it and I live better for it.”

“How To Get Away With Murder” returns with its final episodes April 2 on ABC.