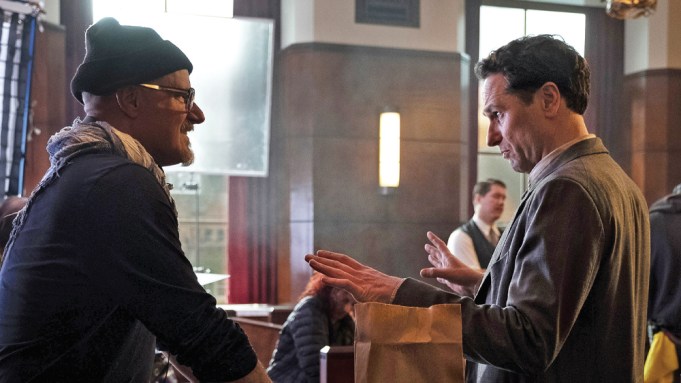 When the prospect of working on a reimagined “Perry Mason” was first floated to veteran TV writer Rolin Jones, he asked himself the question that many might ask themselves in that particular situation.

“Everybody has the same reaction,” says Jones. “They go ‘Why? What the f–k for? No one is asking for that show.’”

Fair enough. As personified by the late Raymond Burr in the ’50s and ’60s, then again in the ’80s and ’90s, “Perry Mason” was a television institution less interesting than its times. A formulaic drama centered on a Los Angeles defense attorney whose clients always turned out to be wrongfully accused, the original “Perry Mason” set the mold for crime procedurals such as “Law & Order.” But contemporary audiences likely know it best as something that old people fall asleep to reruns of. In the double-platinum age of television, an HBO “Perry Mason” might be the unlikeliest of reboots.

But taking its cues from the original pulp novels of Earl Stanley Gardner, the new “Perry Mason” strives to be of its moment — even as it roots itself in the early 1930s, when Los Angeles was experiencing rapid growth, with the end of the Great Depression and the beginning of World War II just over the horizon. The show takes great care, through the reinvention of classic characters such as Paul Drake, Della Street and Hamilton Berger, to show how Black people, queer people and women were forced to fight or disguise their true selves if they wanted to participate in society’s foundational systems. And with a hero at its center whose pursuit of justice is relentlessly opposed by those systems, and whose methods are radical, it is a thoroughly modern show.

“He lives and dies by his mantra, ‘There’s what’s legal, and there’s what’s right,’” says Matthew Rhys, who plays this new incarnation of Mason. “The one thing that elevates him is his sense of justice. In his past he was dealt such a huge blow by a betrayal of justice. It kind of becomes his North Star. So regardless of his means, ultimately, if what he does is right, it’s warranted.”

Like many great TV series — particularly many great HBO series — the new “Perry Mason” had a winding development path. It began 10 years ago when the Gardner estate started trying to drum up interest in a contemporary feature adaptation set in the present. Robert Downey Jr. and his wife and producing partner Susan Downey happened to be on the lookout for new vehicles for the actor to star in.

The performer had been catapulted into the industry’s upper echelon on the strength of the “Iron Man” and “Sherlock Holmes” franchises. But the prospect of a feature, especially one set in the present, failed to excite the Downeys. At the same time, television was entering its golden age, and film stars were beginning to find exciting work (and big paydays) in a medium that had for decades represented Hollywood’s second tier.

“We loved the title and the opportunity to do something with it,” says Susan Downey. “But Robert said, ‘I don’t really have an interest in doing a present-day version of it. I would love to explore one back in the ’30s.’ We wanted to go back to the source material, much like we did with the ‘Sherlock’ movies, mining it for what made it interesting and great in the first place.”

HBO turned to Jones and Ron Fitzgerald, writers who had worked together on “Weeds,” “Friday Night Lights” and “The United States of Tara.”

Fitzgerald was also dubious about the source material. After talking through the noirish vision for a hard-bitten Mason’s period origin story, he began to come around.

Unlike the episodic original, Jones and Fitzgerald’s “Perry Mason” unspools a single case over the course of the entire season — in this instance one with historical analogues, among them the Lindbergh baby abduction. But Mason at the outset is not a confident, competent attorney. He’s a run-down private investigator who has long since buckled beneath the weight of his personal baggage.

Though Gardner’s novels (not known for fully fleshed-out characters) don’t offer much about Mason’s background, Jones and Fitzgerald immersed themselves in the books and emerged with useful fragments.

“The character in the book will go on a little bit of a rant or offer little profound statements about how he feels about justice or the law — things that were little linchpin clues to the character,” says Fitzgerald. “We started to use those as tentpoles as we asked, ‘OK, if this guy five years from now is going to say something like this across the desk to Hamilton Berger, how did he get there?’”

Along the way to becoming something a bit closer to the character that viewers expect, Rhys’ Mason gathers a cadre of fellow travelers, including Paul Drake (Chris Chalk), who we meet as one of the only black officers in the Los Angeles Police Department, and Della Street (Juliet Rylance), whose aspirations and expertise extend beyond secretarial work.

“We’re trying to write for a diverse audience,” says Jones. “In lily-white-run Los Angeles in the 1930s, you’re going to have to tell a particular story. But how are we going to get some of what the country looks like today into the story?”

Other elements from the period were layered on to give the show the sense of a city not powering into a Great American Century but rather, teetering on the edge of apocalypse. Not the least of which is a storyline that runs parallel to Mason’s about Sister Alice, inspired by the real-life Aimee Semple McPherson — a tent revival preacher who brought her charismatic, faith healing-friendly brand of Christianity to a brick-and-mortar home in Echo Park.

“I think that there’s a great deal of humanity in this show, in among a lot of violence and lies,” says Tatiana Maslany, the “Orphan Black” star who plays Sister Alice. “That’s sort of what is resonating with me right now, given everything we’re going through today.”

Maslany is part of a heavyweight cast that also includes John Lithgow, Stephen Root and Lili Taylor. At its head is Rhys, who came in after Downey’s feature schedule forced him to step aside from the role. For Rhys, “Perry Mason” — which is designed to be an ongoing drama, according to HBO, not a one-off mini, though there are no definite plans right now for a Season 2 — is his first work as a U.S. series regular since the end of FX’s “The Americans.”

“I just loved the idea that he would want to do this coming off a show like ‘The Americans,’ which did really well and he got a lot of accolades for,” says HBO programming chief Casey Bloys. “I was thrilled that he was an option. So I just feel incredibly lucky that it came together the way it did.”

Rhys, for his part, also had the image of Burr in his mind when the call came asking if he’d be interested. “My agent called and said, ‘Look, they’re going to remake “Perry Mason,”’” the actor says. “And I immediately said, ‘Why?’ But then he said HBO was remaking it. And that was interesting.”