A young Latinx man hired to portray a bartender in the Season 2 finale of “Good Trouble” took his mark in the South Los Angeles warehouse in which the scene was taking place and looked up and across from him. There, projected onto the wall, was the face of an even younger man who was a close family friend before he was killed by police. It was an emotional moment, but it was also the epitome of the environment the team behind the show was trying to create.

“We’re trying to create environments where people feel into what is happening,” says Patrisse Cullors, co-founder, Black Lives Matter Global Network and co-writer of the “Good Trouble” finale episode entitled “Trap Heals.” “It’s not a protest space, it’s not necessarily an art gallery, but it does protest and it is fine art. It’s a mashup.”

The episode is named for the real-life cultural collective of the same name that features artists and strategists setting up philanthropic activations, which Cullors call “sensory experiences.” The idea is to mix the urban environment of the trap (a space where marginalized people in low-income neighborhoods have to create opportunities for themselves) with more naturalistic elements: Black-owned food trucks are parked next to classic cars with vines threaded through the windows; various kinds of trees dangle hand-written notes depicting such goals as “I wish I could go to college.”

Cullors has been writing (and appearing as herself) on “Good Trouble” since the end of the first season of the show, at first to assist with crafting Malika’s (Zuri Adele) activism. As time went on, she showed the executive producers videos of Trap Heals’ work and explained both its mission and aesthetic. The result was setting the major action of the second season finale episode in a 140-feet by 60-feet warehouse, where production designer Rachel Kamerman meticulously recreated certain pieces of past Trap Heals’ activations, while Cullors ensured each individual character’s journey would be moved forward by their interaction in the space.

“Malika’s bringing all of her friends to her world, and we wanted her world to live inside the Trap Heals space,” says Cullors. “We had to be very intentional about our approach and whose story is it? But it felt important because we live in a multiracial country, and given that we are under such divide in this political moment, it felt important to put all of these worlds together and make our white characters, frankly, step into a space where they’re like, ‘Oh s—, I’ve never been in this environment before.’ If you didn’t grow up around a particular group of people and you enter into their space, you’re like, ‘What the f— do I do? Do I take off my shoes? Do we hug? Do we shake hands?’ You don’t know what the cultural norms are, but for us in the ‘Good Trouble’ family it’s such an important opportunity to script those awkward moments because they’re happening in real life and the audience can say, ‘How do I see myself in this?'”

This approach is what allows Malika to have a moment with her previously incarcerated father, and it also allows her boyfriend Isaac (Sarunas J. Jackson) to find a space to deal with his anxiety. Callie (Maia Mitchell), who has been struggling with the way the police treated a mentally ill homeless man who followed her into her apartment complex, has a moment at a phone booth installation, listening to the words of others who have had similar experiences. Dennis (Josh Pence) sees the loss of his son in a new way after walking through the Black Lives Matter memorial.

“For Dennis’ character we really wanted to allow for him to grieve, given that he’s been grieving, while also reminding him that there’s so much happening in the world around the experience that black people had, especially in Black Lives Matter, and that black people are also grieving their children,” says Cullors. “It felt really important to tie that story in without minimizing his experience, but also just reminding him, ‘Hey there are so many other experiences out there that you can relate to, given the grief part, but also ties into a greater political issue that you may want to consider thinking about.'”

Trap Heals activations feature various kinds of healing, from acupuncture, massages and rake to alkaline water and CBD bars. All of these elements were recreated in “Good Trouble,” and an important center piece was also a stage where musicians (including The Knuckles, Iman Europe and Turner himself) would perform throughout the episode. Because there are “parts of the Trap Heals setting that are playful,” Cullors notes, she was able to work in the Mariana (Cierra Ramirez)-Raj (Dhruv Uday Singh)-Isabella (Priscilla Quintana) triangle into the setting, too.

In order to build this special space for screen, Kamerman studied past Trap Heals activations online and collaborated closely with Turner to bring in essential elements from the organization’s past work. This included the phone booth, cherry blossom trees, the massage areas and healing pods, bringing in a car and the Black Lives Matter memorial. The latter featured the real names of black men who have been killed in the last five years — plus one fictional character in the show’s Jamal Thompson (Spence Moore II) — as well as approximately 20 images of some of the men. (It was one of these images that was across from the actor playing the bartender for the duration of the shoot.)

“That, for me, was quite a challenge because I wanted to make sure I honored them appropriately,” shares Kamerman. “My inspiration behind it were some of the lynching museums, and then to add the cinematic element, I put the names on plexiglass so we’re not only lifting up their names and recognizing them, but we’re also able to [film] through it.”

Some of the parents of the real-life victims came to set in between filming as another way to honor those lost. “It was a transformative moment on set for these people to be see and to be held,” says Turner. “And that is a mission of Trap Heals — honoring our people both physically in the present and in the spirit.”

One piece that was created brand new for “Good Trouble” was the entry way, which featured the words of Turner’s Trap Heals manifesto on the walls. It was an idea that first came out of a cross-department meeting about this episode, but Kamerman says she specifically “wanted to take what was in his art and soul and make a strong statement when you enter the space.” 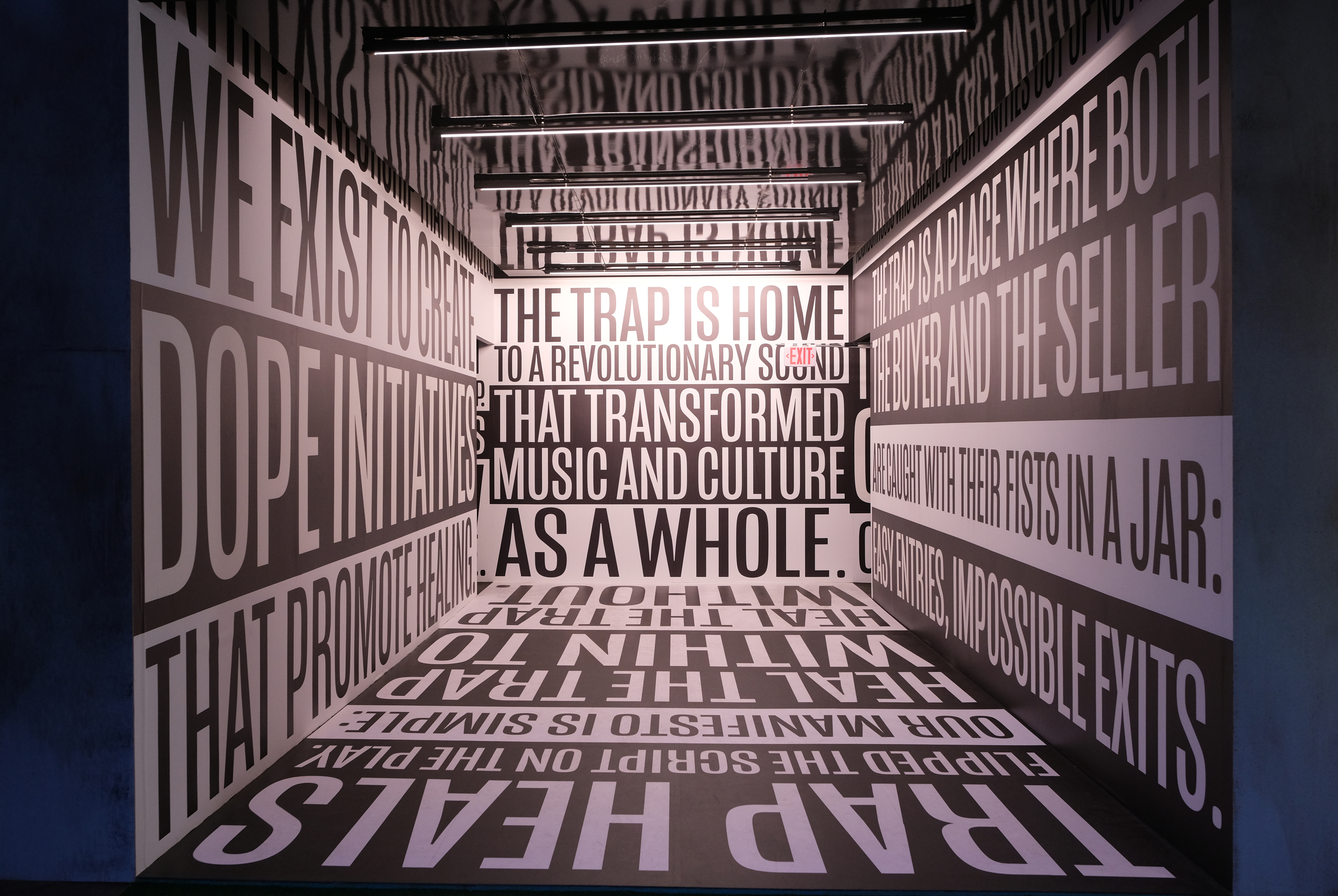 “As a poet I don’t usually see my words as art — I see my performance as art — but to see my words 12 feet tall and 50 feet long, it really reminded me the power of the written word, the power of immersing people in language,” says Tuirner. “When I walked into the space, it was magical. It was a huge humbling experience. It cemented that we are here — that we exist in the world.”

Kamerman also tweaked a few design elements simple because she had to think cinematically and consider how the camera and actors would move within the space. Even though the production team only had about a week to build and light the entire set, she was adamant it would be a 360-degree, fully functional activation so everyone could interact with any piece of it.

“I took a huge leap from what they did with the astroturf to create Malika’s own ‘Wizard of Oz,’ in a way. It’s wondrous, and she kind of meanders through the space, and then I embellished and creating those healing pods because I knew healing was important for the community,” Kamerman says.

Additionally, she pulled together the look of the space with the greenhouse effect Turner instills in all of the real-life Trap Heals events, including “one tree over the bar that was all handmade,” she notes. And art from Damon Davis, Richie Reseda and Gabe Gault (a Nipsey Hussle portrait that was enlarged) was brought in to tie everything together further. 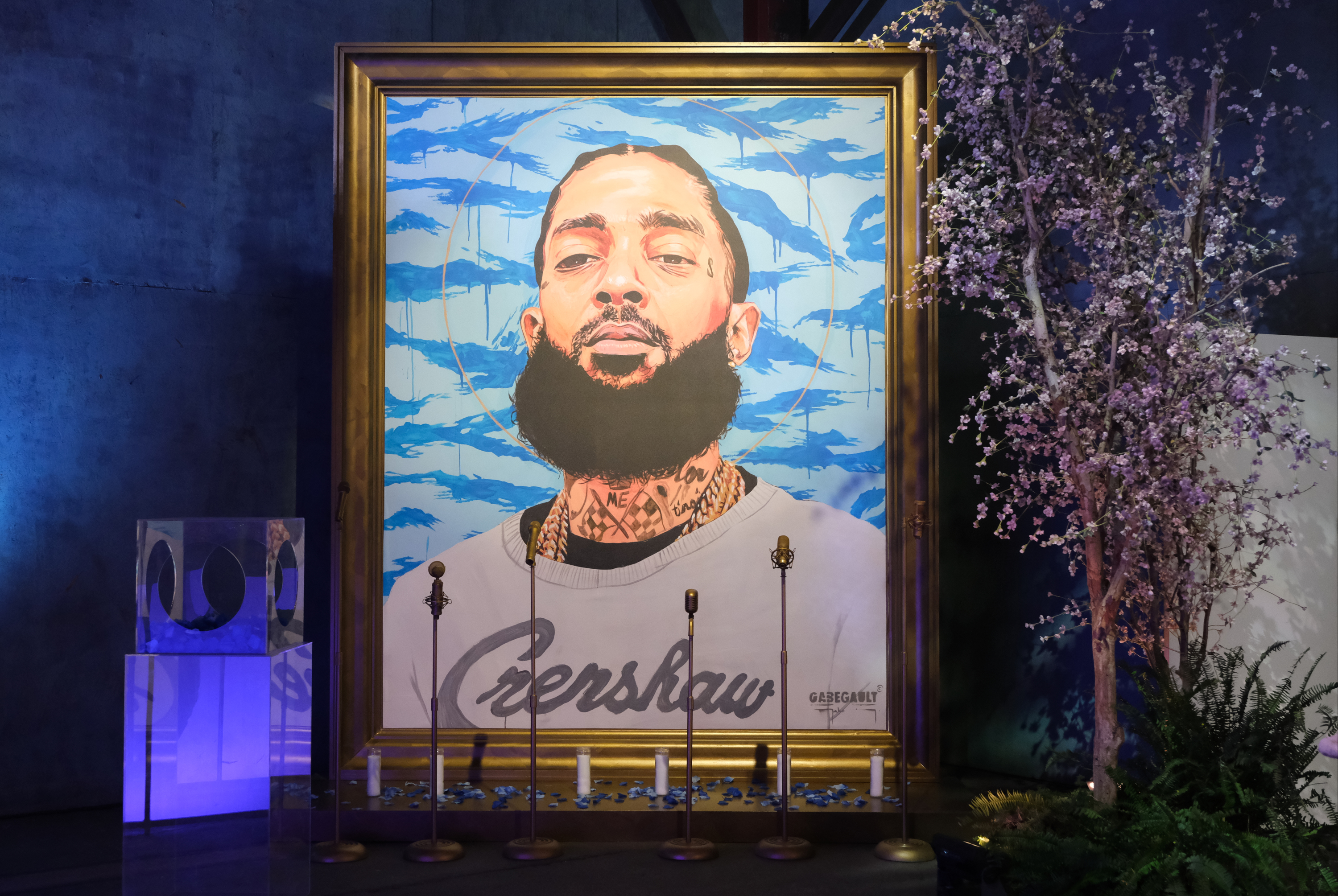 “I had to make sure I didn’t have a white woman’s interpretation of this. I had to be very sensitive and make sure that everything — every detail, down to the car we selected — would be appropriate,” Kamerman admits.

In giving Trap Heals a platform like Freeform, Turner hopes there will be a better understanding “that there is a community out here building these types of spaces and affirming our blackness and showing an evolution of culture that has been represented by a very toxic and hyper-masculine identity.” While trap has been misunderstood in the past, Turner adds that now “trap is a space for healing and for community-building.”

Going forward with the real Trap Heals, Turner says the “desire is to purchase more assets and really build this hub and build out our 501(c)3. We have this vision to really support those who were incarcerated and are transitioning back into life and want to be in the entertainment space to have home residency to work on their crafts without worrying about homelessness or violence from the police.”

Currently, he is in conversations about new partnerships and new content for the year, primarily “about how to really scale up this movement to become a global presence.”