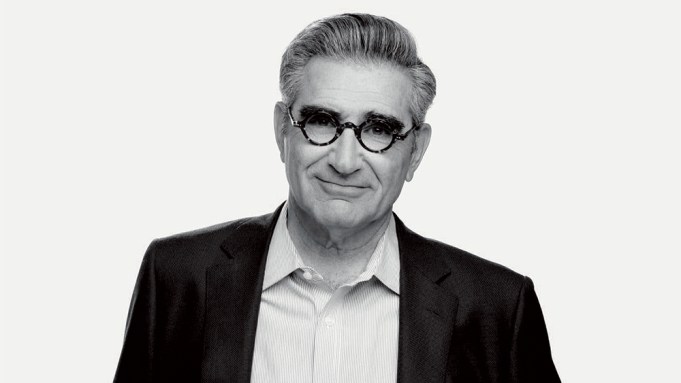 Ask any handful of cinephiles and television heads about their favorite performance from Eugene Levy’s almost five-decade-long career, and you likely won’t receive the same answer twice.

From his days in the 1970s with the Second City improv troupe in Toronto that turned into “SCTV” in the 1970s, to partnering with Christopher Guest for a series of mockumentaries, including “Waiting for Guffman,” “Best in Show” and a “Mighty Wind” in the 1990s and early aughts; to turning a protagonist’s parental figure into an icon with “American Pie”; voicing a fish in “Finding Dory”; and starring as his real-life son Dan Levy’s on-screen dad in “Schitt’s Creek,” Levy is the kind of actor who captivates with every comment and creates comedy with even the simplest of looks.

“He’s a good man and I respect him. Every day is fun and funny and peaceful and enjoyable,” says Catherine O’Hara, who has worked with Levy since the 1970s. “In the beginning I was nothing but scared and I looked up to Eugene. He was just always funny on stage.”

But he isn’t “just” an actor. Levy’s impressive resume also includes writing, producing, directing and performing music. Over the years, Levy has picked up critical and awards acclaim alike, with Emmy wins for writing “SCTV” in 1982 and 1983 and a Grammy for the song “A Mighty Wind” from that 2003 film. Now, as he is celebrating his second consecutive Emmy noms for producing and acting in “Schitt’s Creek,” he will also be honored with the Newport Beach Film Festival’s first-ever Lifetime Achievement Award on Aug. 11.

Levy credits the lessons he learned in the Second City Theatre and on “SCTV” with setting him up for long-term success.

“Improvising is coming up with material off the top of your head, but realizing everything you’re doing [has to] work for the scene,” Levy says. “It’s not just a question of how funny you can be, it’s [also a] question of how you can move the story. I was fortunate that when I started [on “SCTV”], our head writer, the late Harold Ramis, who was an amazing writer, mentored the rest of us. All we wanted to do when we were coming up with material was please Harold. His nod of approval was what was paramount.”

Levy says when he began on “SCTV” he “didn’t really know how to write for television” and “was feeling like I was not the strongest performer on the show.” But by observing and absorbing from those around him — from Ramis to O’Hara, John Candy, Joe Flaherty and Dave Thomas — he drew comfort and sharpened a few skill sets.

“The sensibility that you have when you’re improvising is that it’s totally the stories [and] character-driven,” Levy says.

“It was very important to us that the audience could have an emotional grip on these characters — a connection to these characters. Because certainly in ‘A Mighty Wind,’ we took some storylines in a very serious direction. Mitch Cohen was a character who was on top of his game — a brilliant songwriter who had this great relationship with his wife, Mickey; they became the sweethearts of the folk music scene. And then they had a horrible divorce. And that sent him into a funk. He tried a career on his own, it wasn’t working. He started taking drugs, he fell into a depression, he eventually went into a sanatorium, he was not well, and that sets up what’s going to happen. And when they reunite, I kept thinking, ‘We have written this guy into such a bizarre character. How do I actually pay him off in terms of what he’s going to look like and what he’s going to sound like?’” Levy recalls.

“The Mitch and Mickey storyline with a kiss at the end of their big hit song at the reunion was a storyline that we discussed so seriously for the longest time, thinking, ‘How can we do this as a storyline? It’s not really funny, and how dangerous is it going to be? If this for some reason doesn’t work, this film is going to fall so flat.’ But we were really driven by the idea that if these characters are as strong as we want them to be, and if they’re as strong as we can make them, this should work and the audience should care about these characters enough to make that storyline work.”

The key, Levy says, is “keeping everything grounded and keeping a truth in our comedy.”

When it came to “Schitt’s Creek,” which the Levys co-created in 2015, and which ran for six seasons on the CBC in Canada, as well as Pop in the U.S., Dan Levy brought his father a concept that had the “same sensibility that Chris and I write in our movies,” Levy says, although he calls his patriarch Johnny Rose more of a “straight man” than he has ever played before, which made him a character both closest to him as well as “a very exciting new challenge.”

“There’s such an art to being a straight man — to seemingly not have the funny punchlines, but to be responsible for the actual comedy in the scene and to be bringing out the humor in everyone around you,” O’Hara says. “But he’s also a great actor. There was a scene in the second season [of ‘Schitt’s Creek’] where he had to do this speech defending not only his new life, but his new friends, and that made me cry every single time he did it.”

As a child, Dan Levy admits he did not really know the scale of his father’s work. “He made a very conscious effort to keep my sister and I and our family in Toronto so as to avoid the Hollywood life,” he says. “He was very selective about when he chose to bring the characters home. It was usually when we were fighting when I was a teenager: He would use it to kind of neutralize any kind of teenage anger I might have. It’s very hard to stay mad at someone who is putting on voices and getting into characters.”

Visiting his father on the set of “Once Upon a Crime …” in Monte Carlo in the 1990s, where the elder Levy was directing inside a casino, leading a crew of dozens, opened his eyes. But it has only been in more recent years, since he, too, has been in the industry, that Dan Levy has realized that it is not just his father’s talent that has given him so many opportunities and experiences in this business, but also his own sensibility.

“In retrospect, being in this industry and knowing how valuable it is to be in Los Angeles, I realize even more what kind of sacrifice he made professionally in order to protect my family from being exposed to an industry that he really wanted to keep separate,” Dan Levy says. “I’m sure that played a part in his career — just not being here, not being easily accessible, but I think that speaks volumes about who he is: Family was always first. He’s never been hungry for fame. And there’s something really grounded and artful about it, in a way. The reason he has credibility in this industry [is] because he is constructive and helpful, and because he doesn’t bring his ego into work. He is incredibly accessible and he’s incredibly kind, and I think, in an industry that doesn’t often see those kinds of people, that is what has led to a lifelong career.”