How ‘Schitt’s Creek,’ ‘Dead to Me,’ ‘Insecure’ Mine Money (or Lack Thereof) for Laughs 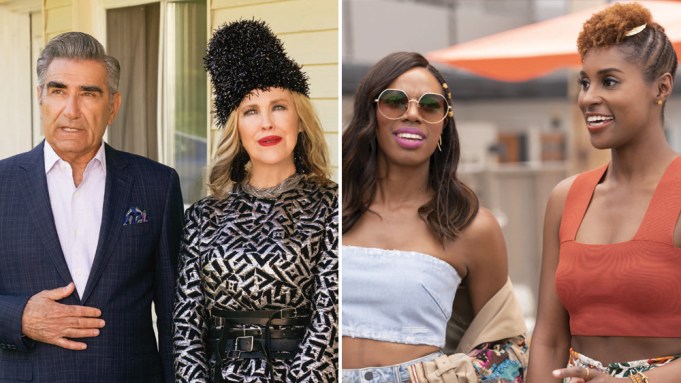 Television has evolved from the days of unrealistic apartments and lavish wardrobes. Instead, as some of this year’s comedy series Emmy contenders prove, money has become a tangible way to mine humor and develop characters or push storylines while still offering a dose of aspirational escapism.

Money and class were instrumental in the “Schitt’s Creek” pilot, when the Rose family lost everything but their clothes and were forced to move to a small town. That fish-out-of-water setup is typically a wealth of potential comedy, but as showrunner Daniel Levy leaned into wealthy satire it was important to never make the small town itself the joke.

“We were satirizing just how out to lunch these people are in contrast to a town that we had made a very executive decision to never make fun of,” says Levy. “We really played on the fact that this town was progressive and accepting and loving and smart and aware. The Rose family coming in there thinking they were so superior and worldly, and that they have traveled and they know things is instantly funny. Their knowledge is really rooted in something that is so intangibly [the] 1%.”

Tapping into the upper class on “Dead to Me” was a different journey for showrunner Liz Feldman, as Jen Harding (Christina Applegate) lived beyond her means in Laguna Beach while trying to keep up with the status of those around her. In the second season that translated into another layer of the story as Jen dealt with her grief, being a single mom and covering up a murder.
“Here is this person who presented herself as a fully together, successful, in-control woman on the outside, while on the inside she’s absolutely destroyed and falling apart and in grief,” Feldman says. “Money is more of a peripheral issue. When we started to realize that Jen was probably spending quite a bit of money covering up for this crime that she did, we saw an interesting, inherent conflict in paying the price — both literally and figuratively.”

Showrunner Prentice Penny reveals financial status is constantly driving conversations in the writers’ room at “Insecure,” where Issa Dee (Issa Rae) is still up and coming. With her character they consciously explain how she’s able to afford rent at a place above her means, and for other characters, small details — including whether one would actually frame the pictures in an apartment — tell a larger story.

“We don’t want Issa to be dirt poor, but we’re always wrestling with what does she have or what doesn’t she have, and then how do we lean into that for story,” he says. “We try to be honest to where the character is financially, which is very different than Molly Carter [her friend, played by Yvonne Orji], who’s a corporate attorney and is able to afford things that Issa may not be able to afford. We’re always asking questions, breaking it down. We want to introduce Issa as having a little bit more financially but we never want to feel like our characters are living in a world where they normally wouldn’t exist.”

The juxtaposition between Molly and Issa goes even deeper when Penny breaks down their upbringing; Issa came from a greater place of privilege than Molly in terms of where they grew up. He says that is one of the reasons Molly feels she is more accomplished, and it drives story and emotion on another level, specifically with audiences who have their own connections to the characters.

“If that character’s connection to the privilege is from a snobby place, that’s hard to like. You’re trying to always balance what that character is like in general with how do they use their wealth, class and privilege. No matter what, if we’re using Molly to flaunt the privilege she has now it’s because there’s something interesting to it. If we’re leaning into the fact the character is throwing money in someone’s face we address the why. I don’t think we’ve ever done it just [to do it]. But we definitely have done stuff where Molly has kept count of money, and how much is given to Issa, and we have used and weaponized that.”

Feldman reveals the fancy house with the pool and a nice car on “Dead to Me” was a decision to contrast the surface and the core of Jen as a character. “Things can look one way on the outside and feel very different on the inside. The way in which Jen becomes relatable is by what’s going on inside,” says Feldman. “She’s a woman who’s lost her husband in a tragic accident; she and her children are in really intense grief. Loss is a universally relatable experience, just as it’s relatable to be the kind of person who wants to seem strong but is ultimately quite vulnerable. We were interested in the challenge of creating a relatable character from that.”

“I think what people like seeing, especially right now, is rich people getting some comeuppance or going through a lot of drama and being upended,” Penny adds. “People like seeing others that might have more money and finding humor in their existence. Nobody wants anybody to have everything.”

On paper, the Rose family should not have been likable. But Levy was adamant Johnny Rose (Eugene Levy) made his money from nothing and that the entire family held genuine curiosity about the new people in their lives.

“They look at the joy and the pride that these people have. Then they look back on themselves and realize they don’t have that. They have designer clothes, but what does that mean? That really led to the emotional through-line of our entire show, which was slowly but surely exposing these wealthy people to true love and to the idea of taking responsibility for your actions,” Levy says.

“Obviously, you’re playing in the fantasy that a lot of people have in watching the 1% fall. Finally, a wealthy family you’ve read about in the news is experiencing what it’s like to live with nothing,” he notes. “But it was important that those characters ultimately redeem themselves.”