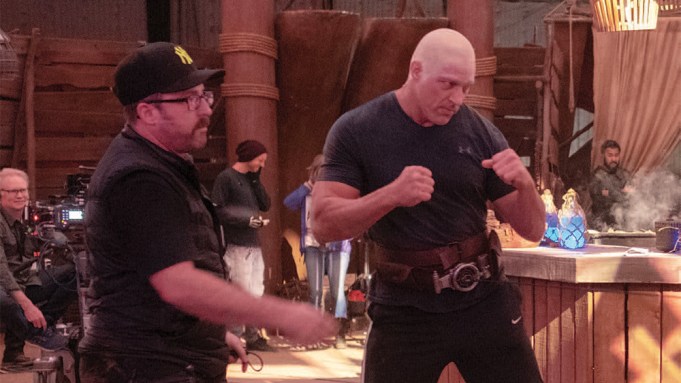 Ryan Watson’s career in stunt work began when he was 16 years old and played the Ninja Turtle Raphael in a series of shows at Disney World in Orlando, Fla. From there he packed up his costume carapace, moved to Los Angeles and never looked back. Watson has worked on blockbuster movies including “Wonder Woman” and “Pirates of the Caribbean,” but the greatest challenge of his career so far has been coordinating stunts and fight sequences for the Disney Plus series “The Mandalorian,” for which he is now Emmy-nominated.

How did you score your first gig working in film and TV stunts?

I moved out to L.A. on a whim with 300 bucks in my pocket. Within two weeks I got a job on “Buffy the Vampire Slayer” from a connection I had in Orlando, and I ended up doubling one of the main guys just by accident. I thought, ‘This Hollywood thing is easy, I’m going to be rich,’ but then I didn’t work again for three years.

In what way is “The Mandalorian” different from the other large-scale projects you’ve worked on?

The pressure and the pace made it more challenging, but the subject matter was a dream come true. “The Mandalorian” has all these gadgets and that was so fun. I’ve done a lot of superhero movies, and they’re great, but it was nice to work with naturally powered people — no jumping over mountains or slamming trains down a ditch. You can’t get away with as much fakery. I had to call on every single part of my martial-arts training and make it look natural, not choreographed.

Is there an episode that stands out for you?

Fighting-wise, I think probably Episode 8 was the best because Taika [Waititi] was the director and he has a lot of fun in his style, he adds playfulness and drama to his choreography [and] he’s real hands-on in terms of the attitude that comes into the fight. For example, a punch coming from someone that’s angry is going to look different than a punch coming from someone looking at a stronger enemy down the road. You get different mannerisms, and that was key because it’s hard to sell Mando in all that metal with no facial expressions. A lot has to come from the body and the mannerisms.

Talk about choreographing that epic fight between Mando [Pedro Pascal] and Cara Dune [Gina Carano], how important was that in establishing her character?

The different galaxies and planets allow for so many different types of fighting, and that made it easier to do Gina’s big debut. I’d met her before and heard she’s a tough girl and she can hit hard. That fight started out looser, but Jon [Favreau, executive producer] said it was a little too long. It needed to be more about establishing her attitude, it needed to be straight up, in your face, toe to toe, tit for tat. The final product was easy to make with Gina; she has intentions on every single one of her punches, even if it’s in rehearsal. I always tell the stunt guys don’t start snoozing because she’ll get you. She got one guy in the chest and he wanted to go home immediately. As stunt people we always say you’ve got to watch out for actors, because you never know what they’re thinking. They might hear the bell and go for blood.