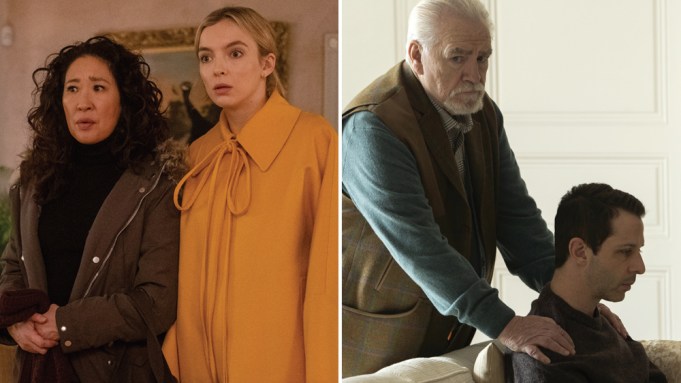 The second season of “Succession” opens on Kendall Roy (Jeremy Strong) emerging from the warm waters of an Icelandic spa.

Kendall has just begun a much-needed stint in rehab, away from his poisonous family, when he is called back by his father and plunged once again into the media dynasty rat race.
HBO’s “Succession” is one of several of this year’s drama series nominees whose characters’ pasts and obsessions lead them to potentially dangerous or perhaps healthy levels of isolation — depending on whether it’s time away from your partner in crime in Netflix’s “Ozark,” the person who tried to murder you in BBC America’s “Killing Eve,” or your traumatic past in Disney Plus’ “The Mandalorian.”

Rather than giving Kendall some space, “Succession” showrunner Jesse Armstrong says the move was more of a forced exile — Logan punishing his naughty son for betraying him and trying to take over the company behind his back.

“There’s a history in powerful families of trying to get rid of black sheep or people who don’t fit in, or have mental ailments,” Armstrong says. “It feels like the isolation of a problematic element in the family life. Maybe he needs it, but I’d actually say what he needs more is true connection with his family and a bit of honesty.”

“Succession” deals with vast wealth, power and the competition that naturally arises between siblings when they are raised with the idea that their father’s “business empire is hereditary,” Armstrong says, with the idea that only one of them will inherit it all. This central idea forces the family members apart, while their wealth forces the family itself further away from normality, as well.

“Very rich people isolate themselves because they don’t want contact with other people, and then guess what, they find themselves rather isolated and out of touch,” Armstrong says. “That wonderful, rather extravagant-looking yacht that they find themselves on at the end of Season 2 is a living hell. I’m not crying for them, but it is nevertheless a great irony that they’re cut off from the stuff of happiness in life as a whole.”

Whereas viewers will never know if several months in rehab would have put Kendall on the straight and narrow, one central character who benefits from an intense period of isolation is Marty Byrde (Jason Bateman) in Season 3 of “Ozark.”

In one episode, Marty is kidnapped by the leader of a Mexican drug cartel and forced to endure sleep-deprivation in a cell. While locked up, he has an important reckoning over his and his family’s future.

“Marty’s whole arc in that episode was internal and coming to a realization about himself that he didn’t get into this thing by accident. In a lot of ways, he actually wants to win, it’s not like he just wants to get out,” Mundy says. “That was a step toward Marty understanding himself better because he had to, it was just him alone in a cell for so long.”

Much like Logan Roy’s offspring, the Byrde children suffer because of their parents’ work and cut more distant figures as a result. However, in Season 3 of “Ozark,” it’s Charlotte (Sofia Hublitz) who insists that Marty and Wendy (Laura Linney) see a therapist together as part of a deal that will see her return home.

“Family is family and I think she realized that the world is a little scary out there on your own,” Mundy says. “Even as messed up as the Byrde family is, they are still the only people that can truly understand the situation they’re in. There’s so much they can’t say, and the secret they share keeps them in some way dependent on each other, both for good and for bad.”

The central characters of “Killing Eve” and “The Mandalorian,” on the other hand, isolate themselves in large part because of past trauma.

“With these two women, it’s really about the fact that they’re seen by the other in a way that no one else has ever seen them before. I think that for both of them that’s such a unique and powerful experience that no matter how hard they try, they’re unable to find anything else that quite matches that,” says “Killing Eve” executive producer Suzanne Heathcote.

Their delicious, yet poisonous obsession with each other also leads to collateral damage on both sides, leaving Eve (Sandra Oh) in particular feeling like she’s a “danger to others.”

“Even though [Eve] is trying to regain some sort of normality, her version of that normality at the beginning of the season is a version where she completely removed herself from her life in a very isolated way of living because that feels safe, both for her and for those around her,” Heathcote says. “She feels like a dangerous person, and the fear is she has no idea how far she can go because she’s already gone so far.”

The season ends on a somewhat cryptic note, with each character looking back at the other across a bridge, after Eve acknowledges that she cannot live her life without Villanelle (Jodie Comer).

“Villanelle could walk away from Eve and all the danger that she represents in her life as well. Yet neither of them is able to continue that journey away from each other, without looking back,” Heathcote says.

The attraction that the titular Mandalorian (Pedro Pascal) feels towards his newly adopted protégé the Child (aka Baby Yoda) also hauls Mando out of his isolated ways, says executive producer Dave Filoni.

Mando begins as a lonely gunslinger, broken by the death of his parents as a child and “that armor he wears is representative of how he’s protecting himself inside — how he’s protecting that fragile, young part of him that obviously went through trauma early on,” Filoni says.

But taking the Child under his wing puts Mando on a different course, moving away from his solitude and defining his life by his profession.

“Having [the] Child with him has put him in touch with people and in situations that he’s had to make more selfless choices,” Filoni says. “The Child represents the nature of the force; he’s the conscience through this whole thing, guiding these characters that are on the margins to better [choices] than they would have made without him.”