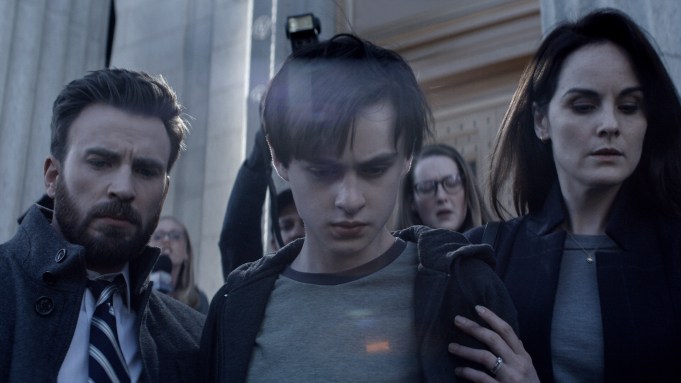 SPOILER ALERT: Do not read if you have not yet watched “Defending Jacob,” streaming now on Apple TV Plus.

William Landay’s 2012 novel “Defending Jacob” never definitively answered whether or not the titular character committed the crimes of which he was accused, but it did provide a close-ended story for the teenager, who was killed in a car crash his mother caused. Mark Bomback’s limited series adaptation for Apple TV Plus left even more open to interpretation.

Laurie Barber (played by Michelle Dockery), wracked with nerves and fear that her son may have actually stabbed his classmate to death, sped down a slippery road and crashed the car that carried her son Jacob (Jaeden Martell) as a passenger. But in the show, both of them lived, even if they were both a little worse for wear. She suffered a head injury and some memory loss of events of that day, while he laid unconscious and hooked up to many more machines in the hospital.

“It’s darker if everyone is forced to live with each other in the aftermath of this,” Bomback tells Variety. “The reason I liked the notion that Jacob survived and will recover enough to engage in their lives again is that I think there’s something more terrifying about the possibility that, as she says, he wakes up and thinks she tried to kill him. They’re going to be trapped in prisons with each other of their own making.”

The series was designed as a limited one, and Bomback admits that he has no current plans to actually extend the world of the show beyond its eight-episode first season. The idea of that aftermath is one the audience will have to just imagine, as they also have to decide for themselves whether or not they think Jacob was actually guilty.

Jacob was legally in the clear after local pedophile Leonard Patz (Daniel Henshall) was found hanging with a suicide note that doubled as a confession to the murder, but there were still questions about his true innocence when his father Andy (Chris Evans) learned Leonard was forced into writing that confession and then murdered — a hit ordered by Andy’s father (J.K. Simmons), who was in jail for murder himself.

“The whole story is about whether or not there is such a good thing as a good lie — something that could possibly preserve your family,” Bomback points out. “It starts out that Andy has been lying to Laurie about his background and he comes clean, but there are little lies throughout. If you track the show, there are little lies in every episode. It starts simply, like when his father calls and he tells Laurie it’s the credit card company. To me, the ultimate twist in the story is the whole time Laurie has been the one being fearless about finding the truth, even if it means destroying everything that she built her whole life, and in the end she comes over to Andy’s way of living.”

When even Laurie begins to question her son’s innocence — so much so that she would rather greatly harm him than risk he could harm someone else — she crashed the car. But when she wakes up in the hospital without all of her memories, she embraces the lie that it was an accident. Andy testified to that in front of a grand jury, so determined to keep his family together, and she “truly wants the validation of a grand jury to tell her it was an accident, and she wants her husband to tell her it was an accident, but I’m pretty sure in the middle of the night, weeks from now, she will be entertaining the possibility that it could have easily not been an accident,” Bomback says.

Andy, too, changed his ways in a way Bomback calls a “tragic irony.” Although he had been keeping secrets and telling “little lies,” as Bomback calls them, to protect his family, he does tell his wife “the rawest truth” that someone was murdered to free their son. This occurs after a teenage girl Jacob befriended on vacation goes missing and he is questioned about her disappearance.

“Andy finally gets to a place where he shows a willingness to be ethical, even if it means destroying things, and then she’s found, so he didn’t have to do that. It’s an extra level of heartbreak,” Bomback says.

This girl, Hope Connors (Jessi Case), is found somewhat safe in the show, having been drugged and taken from a beach bonfire after Jacob left her at the party because he didn’t want to be around “drunk idiots.” But in the book, her body is found days after she goes missing, having been potentially strangled to death.

This change was one Bomback says he knew he wanted to make “really early on” in the adaptation process — and it was also one he told Landay about “because I didn’t want him to be under false pretenses.” Bomback says he did feel a responsibility to Landay as a fellow writer to “not make something so counter to what he wrote that he would say, ‘Why’d you bother adapting it if you hated it so much?'” But, he also felt this was an essential piece of the puzzle to tweak because of the implications that come with another dead teenager popping up around Jacob.

“Hopefully while you’re watching it you’re saying, ‘Oh my God, could he have possibly killed somebody else?’ If you were to say he did, then you’re implying he’s a bit of a serial killer, and that’s a very different kind of pathology from possibly killing a classmate who he hated for awhile,” Bomback says.

“I believed the parents, after one night of hellishness, could have gone to that place. But I think if we had to live with it, we would have sat back and thought differently. The book rushes through the paces of the story at the end to describe to you what happens with this girl to put you back in the grand jury to reveal why you’ve been sitting there with Andy. When you sit back to try to dramatize that, you realize what plays for the book doesn’t always play for the screen.”