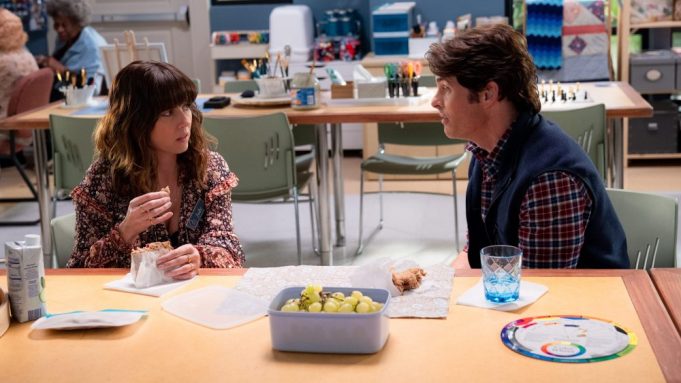 SPOILER ALERT: Do not read if you have not yet watched Season 2 of “Dead To Me,” streaming now on Netflix.

The second season of “Dead to Me” on Netflix started with one hell of a twist: Steve (James Marsden), who Jen (Christina Applegate) killed and then secretly buried with a little help from her friend — and his ex — Judy (Linda Cardellini), had a twin brother. The two had the same face but seemed to be worlds apart in personality — but by the end of the season they ended up sharing a more cosmic connection: Both were responsible for dangerous hit-and-runs.

“I love the perversity of the show,” Marsden tells Variety. “To me, that comedy can come from that is more of a mirror on the way we are in real life.”

As a series as a whole, “Dead to Me” began with the aftermath of Steve and Judy’s hit-and-run — although it was not known from the start that they were at fault for the car accident that took Jen’s husband’s life. Instead, the show started with her meeting Judy in a grief group, which Judy was attending to get to know Jen after the guilt from her role in the accident was weighing so heavily on her. The truth was slowly unraveled over the course of the first season. Similarly, the truth about Steve’s death gets unraveled over the 10 episodes in Season 2, and at the end of that second season, Ben learns his missing twin’s body has been found and he falls off the wagon, resulting in him drunk-driving into the side of the new car Jen just bought for her son. Thankfully this time, both Jen, who was driving, and Judy, who was in the passenger seat, lived.

“I don’t think he saw them in the car. I don’t know that he’d remember them. He was also just blackout drunk, I think. I think the reminder is going to be the blood coming from his nose,” Marsden admits.

Marsden, who originally only signed onto the streaming comedy for one season knowing his character would die, says that he ended up sending creator and showrunner Liz Feldman an email after completing that arc because “the show was so much fun and it also did really well and everyone loved it.” He joked that he had been googling “whether or not a human can survive a traumatic head injury compounded by drowning,” and although she knew he had been kidding, she wrote him back a few weeks later with the idea of him coming back as Steve’s twin.

Although Marsden calls it a “classic soap opera trope,” he says he found it interesting to explore “the whole nature versus nurture thing” with the “very slick and very smooth and very charming … egocentric” Steve and his twin Ben, who is “maybe a little less motivated” but “a better listener.”

“He’s been the Invisible Man his whole life. He’s always been living in Steve’s shadow. And because of that, I think what springs from that is a real empathy and a really kind heart,” says Marsden of Ben.

“Obviously with twins, they really start out the same way — there are certain things that are innate in you when you come out into the world and you’re coded in some ways, but then you’re also completely formed and shaped by how people treat you,” he continues. “We just wanted to do something different other than just parting my hair on the other side and throwing [Ben] in some some Dockers and a Patagonia vest.”

Although Marsden got the chance to literally play a new character in the second season of “Dead to Me,” both Applegate and Cardellini added new layers to their performances as their respective characters flip-flopped their positions in the friendship from Season 1. Originally, it was Judy who was keeping a terrible secret from Jen, but in the second season, Jen spends a lot of time hiding the truth about how Steve’s murder went down from Judy. And the two of them together are trying to keep the secret of what they did with Steve’s body from the rest of the world, including Ben and his mother (Frances Conroy).

“That, to her, is great,” Cardellini says. “She has a secret with her best friend. But at the same time, the betrayal that’s within that is just so tough for her [and] she does have to deal with the complex emotions of grieving this very toxic relationship that she knows she shouldn’t want to grieve in the way that she does. I loved the way they took on the idea of mourning somebody who’s bad for you, even if you know that, and the feeling of loss, even when other people don’t think you’re so entitled to that loss necessarily.”

The second season also explored the “nature versus nurture” aspect of Judy’s life by revealing her mother (played by guest star Katey Sagal) is a drug addict who blamed her daughter (to her face) for her addiction and has been serving time in prison.

“They’re both made of the same cloth and they’ve sort of survived on being able to figure out how to worm their way into any situation and get out of that situation as well,” says Cardellini. “I think there’s there’s a lot of her mother in her, but not quite enough to make her as manipulative.”

But, she adds, the two women have “gone totally different ways.”

“Judy’s mom, she never really loved her in the way that Judy needed. And yet, Judy turns out to be this person who is just filled with love — too much for her own good in some ways,” she explains.

Having Judy’s mother in the story holds “a mirror up to who Judy could have turned out to be — and potentially may still end up in her position,” notes Cardellini.

The kind of empathy that characters like Ben and Judy exhibit says a lot about who they are. “I think Judy always gives love to the people who give it back the least to her. … She’s one of those people who reaches for the person who loves her the least to love her the most and that might prove to her her self worth, because she’s never truly had it,” says Cardellini.

But their example also speaks to a greater need in the world today, in the face of the COVID-19 pandemic.

“I feel right now we’re all missing the kind of connection that we were able to have before and wondering when we can get back to those things and worrying about each other,” Cardellini continues. “At the root of it all is people just want to be connected and loved.”

Watch Variety’s full interview with Cardellini and Marsden above.