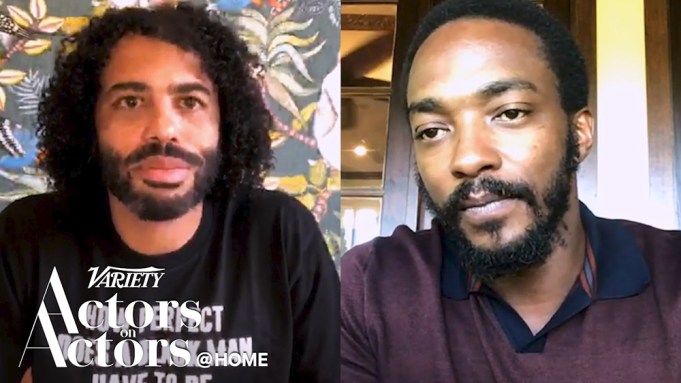 “Hamilton” alum Daveed Diggs stepped into a familiar sci-fi franchise with “Snowpiercer,” a drama set in the universe of the post-apocalyptic Bong Joon Ho thriller led by Chris Evans. Anthony Mackie pulled off a similar maneuver, lending new context and consequence to the second season of “Altered Carbon” by taking over a character played by Joel Kinnaman. Both actors think there’s work to be done on sets across Hollywood. They talked to each other over video chat for Variety‘s Actors on Actors issue.

Daveed Diggs: Congratulations on jumping into “Altered Carbon.” Are you a sci-fi head? Because I am, and you do an awful lot of sci-fi stuff.

Anthony Mackie: I’m not a big sci-fi person. I grew up on “Star Wars,” but I never got into anything futuristic. When I was in high school, there was this movie called “Starship Troopers.”

Mackie: In New Orleans we had huge cockroaches. “Starship Troopers” freaked me out. I can’t do it, man. My imagination is too vivid. But “Altered Carbon” was great. If you look at the “Avengers” movies, I’ve never been the lead, or had to do that much action. It became a painstaking weekly hustle to finish that show.

Diggs: I’m having a similar experience with the TV grind. I’ve never been a lead of a show before, which comes with a certain exhaustion. You’ve got to be responsible for the mood of the set. There’s some heavy lifting to be smiling that much. Especially in Vancouver.

Have you tapped into the Comic-Con circuit? You’re an Avenger — are you involved in that fandom at all? Because people be going in.

Mackie: I loved it, before this COVID stuff. As an actor, you don’t know if people take it the way you want the world to ingest it. And when you go to these Comic-Cons, people adore you. And it’s not so much that they adore you as Anthony. They adore your work.

The same thing with “Hamilton.” I’m sure when you guys were doing “Hamilton,” you felt like Mick Jagger every time you walked out the stage door.

Diggs: The stage door was such a trip. One of the things I appreciate about these fandom worlds is how much the art that you consume is part of your identity. You end up with this wild mix of people who tend to be weirdos and have to shut parts of themselves off. But you come to “Hamilton,” you get to dress up like Angelica Schuyler, or you come to Comic-Con and you get to dress up like Falcon — extensions of your own identity. My identity is totally made up of the rappers I listened to, but I don’t go outside dressing like Tupac.

Mackie: A lot of people do. Your past four years have been an actor’s dream. What has that been like? Can you not go to the grocery store anymore?

Diggs: The big changes are mostly great. I have a house, you know what I’m saying? Things that I never saw as part of my trajectory that I didn’t know you could get by being an artist. Most of the things I struggle with are what is private and what is public. Once you are a different kind of public figure, there’s an expectation of access. Being in quarantine and then the Black Lives Matter protests and all of the pain and fear that’s been coming back up in recent days: Am I asking for praise in stating my opinion? I’m not going to do that.

Mackie: The idea of celebrity has this whole different level of pressure. Being the father of sons right now is very interesting. I don’t post pictures of my little boys. If somebody tried to take a picture of my little boys, I slap the camera out of their hand. I don’t want their reality messed up with the fictitious reality of social media. I want them to go to school and be just like other kids. It is very difficult what to share and how far you let people in. My celebrity voice is not worth more than the regular guy’s voice who’s out there fighting for equality for our people. I can’t take that away from them. I don’t want to stand on the podium and give some half-assed speech about me being in the “Avengers” and now the Avengers are here to help. That’s stupid.

Diggs: Forgive me if this is a loaded question: What are the ways that you find yourself interacting with the moment? I find a lot of my interactions are just trying to make things better in the gigs I have in front of me — how can I affect different kinds of representation? What is the thing you feel compelled to do? What is your participation in this moment?

Mackie: When “The Falcon and the Winter Soldier” comes out, I’m the lead. When “Snowpiercer” came out, you’re the lead. We have the power and the ability to ask those questions. It really bothered me that I’ve done seven Marvel movies where every producer, every director, every stunt person, every costume designer, every PA, every single person has been white.

My big push with Marvel is hire the best person for the job. Even if it means we’re going to get the best two women, we’re going to get the best two men. Fine. I’m cool with those numbers for the next 10 years. Because it starts to build a new generation of people who can put something on their résumé to get them other jobs. If we’ve got to divvy out as a percentage, divvy it out. And that’s something as leading men that we can go in and push for.

On “Snowpiercer,” being a Black man, the lead of the show and the show being about social justice and inequality: When you got the script, did you see that in the show? Was that something you talked to the writers about?

Diggs: I think this is part of the learning curve that I’m on. Obviously, it’s a show about class. But the vast majority of straight white males attached to the show at the upper levels — there’s a missed connection. Now this discussion is happening whether you want it to or not. Or whether you are having it or not.

There are opportunities that I think are missed on the show and things that I end up having to be a gatekeeper for, which should never trickle down to me. Simply because you didn’t have a diversity of eyes on it, particularly upper-level eyes who everyone has to listen to. I’m just like, “I don’t think this show has yet figured out a good way to talk about the fact that class and race are inseparable. So if we’re pretending, if we are making up a fantasy future where that’s not true, you can’t have this image. I am uncomfortable with that.”

A large part of my journey was being able to identify the fact that I can say those things. Going forward it’s about, well, how do we get the conversation to elevate? Because it’s happening anyway, because the nature of my body is causing it to happen. What are the ways that we can get Black folks in the writers’ room, in all aspects of the production, so that it can be a real discussion?

Mackie: It’s very important to have representation at the start of that project. The first season of “Altered Carbon” to the second season changed drastically. And it was this dance we played every day where everybody was checking for errors. That’s how it should be from the conception of the project. So you don’t have to say you’re sorry for doing something that everybody knows is stupid except you.

What do you prefer? You’ve done the music, television comedy. Now you’re doing a television drama. I think the first time I saw you was at Afropop: You were in a group performing, and I was like, “This is some Black s–t. I love this.”

Diggs: I love acting, but I am most free when I’m writing music. No one’s telling me what to do. I get to explore the most sides of myself when I’m doing that. The rest of my life is about trying to figure out how to catch that feeling in all of the rest of the things that I do. Trying to run toward the freedom.

In terms of roles, I have had the good fortune, partially by luck, partially by having a team who understands me and partially by being rigorous about it, of doing things that are really different. And I want to keep doing that.

Mackie: As a young Black actor, your career is only as good as your team’s level of understanding you. I’ve been in the game 20 years now. And I’ve seen a lot of actors come. I’ve seen a lot of actors go. And the one thing that I feel like my team has done is keep my projects interesting and catered to my sensibilities. My ultimate goal is to be Dick Wolf of New Orleans. I want to create a cop show in New Orleans, where I get to be the fat police sergeant. I work one day a week. I come out of my office and I go, “Get in my office.” And then I go back and you never see me again. Until then, I am the best hype man of all time. I put Flavor Flav to shame. If you want to get the music thing going and you need a hype man, I’m here.