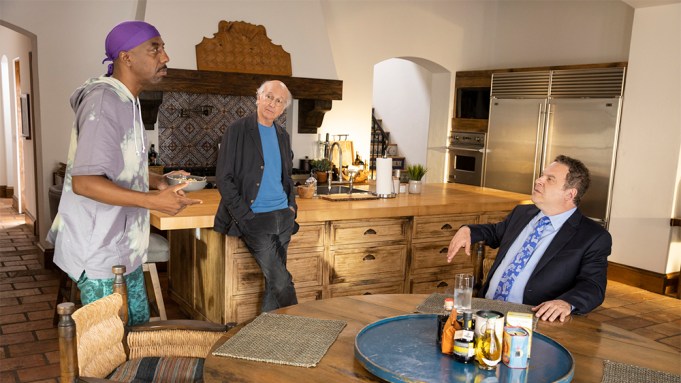 Smoove joined the show in its sixth season as the brother of Vivica A. Fox’s character; when her family is displaced by a hurricane, they come to stay with Larry and Cheryl. The family eventually leaves, but Leon stays behind and has become Larry’s sounding board in subsequent seasons. Asked why the character keeps Leon around, Smoove mused, “We’re the yin and yang. He needs someone to bounce things off of. Once Cheryl left, he needed someone to fill that void. And plus, Leon refused to leave anyway.”

Smoove revealed he was a huge fan of the show even before he was cast, and remains such an admirer that he often doesn’t want to know what’s going to happen.

“When I shoot the show, I don’t hang around. I shoot my scene and I close my eyes and I leave,” he said. “So I don’t even know who the specials gusts are or anything. That’s my trick to enjoying the season.”

Most of the season saw Larry attempting to open a coffee shop as a “spite store” after being banned from Mocha Joe’s, a rival shop. The season finale saw such guest stars as Sean Penn, Mila Kunis and Jonah Hill playing themselves, all of whom opened their own businesses out of spite. The finale cumulated in a fiery end for Larry’s business after Leon allowed a new employee (guest star Chaz Bono) to lock up one night.

Smoove had endless praise for the show’s creator and star. “Larry has a way of attaching himself to the heartbeat of whatever’s going on in the world. It just annoys him so much that he has to put it on ‘Curb.’ Everything from the MAGA hat to the spite store to all the things we did this season, he mirrors what’s going on in the world,” Smoove said. “He finds a way to think of things that annoy him, that annoy people, and he finds a way to make it work in the show, and that’s great writing.”

While there’s no word on a Season 11, David is known to take his time between seasons (there was a six year wait between Seasons 8 and 9.) Smoove said he hasn’t heard anything, saying, “Who knows what Larry’s plan is? Whatever his decision, I can’t wait to figure that out.”

In the meantime, Smoove is managing to keep busy. He’s recorded a guided meditation as Leon and hopes to make more.  And while quarantined at home in Los Angeles with his wife, he’s been making vegan meals and coming up with theme nights.

“We got this thing we do called Naked Thursday,” he said. “On Thursday we get butt-ass naked. You spend the whole day naked. I’m home now, and I’ve got to make things creative.”

He also recommends the South Korean show “Kingdom” on Netflix as he and his wife are big zombie fans. “We watch a lot of ‘Walking Dead,’ we love ‘Walking Dead.’ But it’s not the zombies that are scary. They’re slow, they’re dumb, you can trip a zombie. It’s the people who are scary,” he noted. “We binge-watched the hell out of ‘Kingdom.’ There’s nothing in the world worse than fast-ass zombies.”