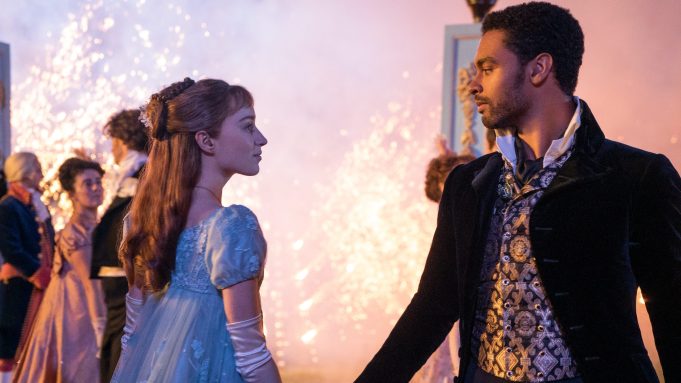 SPOILER ALERT: Do not read if you have not yet watched “Bridgerton,” streaming now on Netflix.

A story driven by emotionally complex relationships, with an added mysterious “whodunnit” element about a gossip columnist spilling high society’s secrets under a pen name, in many ways, feels like it walked right out of the minds of those at Shondaland. But although this story, an eight-episode season of “Bridgerton” on Netflix, is Shondaland’s first scripted project to debut on the streamer, it actually has its roots in Julia Quinn’s nine-book series of novels.

Quinn’s series, which starts with “The Duke and I,” and which also serves as the source material for Shondaland’s “Bridgerton,” is centered on the wealthy and powerful Bridgerton family in Regency England, a time when young women were still presented into society each season in order to be married off. The first season of the new drama series focuses primarily on young Daphne Bridgerton (Phoebe Dynevor) and the deal she makes with Duke Simon Basset (Regé-Jean Page) to enter into a relationship, despite seemingly wanting very different things. Over the course of the season, true feelings begin to form for each other, but so too does conflict come, primarily over the fact that he says he does not want to start a family but will not open up as to why.

Noting that Shonda Rhimes had read the books years ago and loved them, the series felt like the perfect fit for the company to adapt to an ongoing series because “it’s a premise that keeps on giving,” but also because “it’s a story about how — amidst all of the obstacles placed in front of you, royalty, privilege status, anything else you can think of — how do you find out who you really are and how do you express that in your life and in your love?” she continues.

For Daphne, that journey includes harsh wakeup calls, at times. “I always thought that if the first season were to have a subtitle it would be ‘The Education of Daphne Bridgerton,'” says showrunner Chris Van Dusen. “She starts out as this picture-perfect, wide-eyed, innocent debutante. When she starts the season she knows nothing about sex, clearly, and she knows very little about love. So she starts out a little uptight, and she doesn’t even know that she’s part of a system yet.”

The first season also offers important glimpses into a sprawling ensemble of figures in this society, from Daphne’s brother Anthony (Jonathan Bailey), who is carrying on in a relationship he can’t bring public; to her sister Eloise (Claudia Jessie), who is just shy of coming out in society herself and currently has no interest in it, preferring to figure out who Lady Whistledown, the mysterious gossip columnist, really is. It also expands out from that one family to include the Featheringtons, one of whom (Penelope, played by Nicola Coughlan) is revealed to be Lady Whistledown, and one of whom is a secretly pregnant young woman (Marina, played by Ruby Baker), the family has taken in for their own selfish reasons.

Van Dusen, who has spent his entire career working for Shondaland, beginning on “Grey’s Anatomy” and also writing for “Scandal,” for example, does confirm that although other Shondaland dramas of the past that he has worked on have at times only fake-killed off characters, Lord Featherington (Ben Miller) is truly dead at the end of the first season. He also shares that he wanted to keep Lady Whistledown’s true identity the same as in the book series because his writers’ room liked the dichotomy that “she presents as this wallflower, this person who just sinks into the background and doesn’t really have an opinion about things, but then you see a totally different side to her.”

Penelope’s true motivations for sharing secrets — and naming names — will be fodder for hopeful future seasons, he says, which is part of the reason they wanted to reveal who Lady Whistledown was at the end of the first season. Similarly, should the show get the official green light for at least one more season, he plans to expand the center of the story out from Daphne and Simon further to explore more detailed stories about each of the eight Bridgerton siblings, similar to how the book series does it. Eloise, in particular, he notes, “is just getting started. She’s just a spectator in the first season and she gets to comment on things that Daphne goes through and express her disdain for it, but I think it’s going to be a whole different story when she’s actually a part of the world.”

Shondaland’s first-ever project to launch on Netflix was the “Dance Dreams: Hot Chocolate Nutcracker” documentary, following Debbie Allen and her renowned dance academy as they prepared to put on a production of “Hot Chocolate Nutcracker.” Following that with a romantic period piece indicates the wide range of programming the company plans to deliver at their new home.

“The scope is intense,” Beers says of the world of “Bridgerton.” “It’s lush, it’s beautiful, it’s clearly complex and quite an undertaking as a series. But we’re also interested in smaller stories. Netflix understood that one of our big priorities at Shondaland was really getting to explore worlds that we had not explored before. Expect us to continue to bring you things that we love, that we feel passionately about. And expect us to bring to audiences shows in all different genres, set in all different places that all have one thing in common: good stories with good characters.”