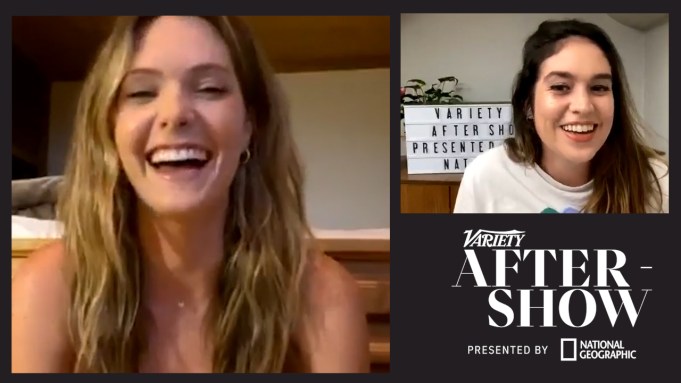 SPOILER ALERT: Do not read if you have not yet watched “Love,” the penultimate episode of “The Bold Type” Season 4.

Meghann Fahy knows Freeform’s “The Bold Type” isn’t necessarily the most realistic, but in an interview with the Variety “After-Show,” she recognizes Sutton’s slow rise from assistant to junior stylist as a true-to-life arc.

“It took Sutton four years to become a junior stylist, she was an assistant for that long,” she says. In comparison to office wunderkinds Jane (Katie Stevens) and Kat (Aisha Dee), Sutton experiences real corporate ladder struggles and set backs before arriving at her dream job.

This payoff doesn’t serve as instant gratification, however.

In the penultimate episode of the fourth season, Sutton and Richard (Sam Page) hit a crossroads as a couple. Richard, at 41-years old, wants kids and doesn’t have time to waste. After Sutton suffers an early miscarriage, she realizes she doesn’t, and doesn’t think she’ll change her mind. Jacqueline Carlyle (Melora Hardin) even asks Richard if he thinks Sutton will as she’s still young.

Fahy continues, “The conversation is changing a little bit. It’s way more reasonable now for someone to be like ‘I don’t plan on having kids.’ And now the question now is, ‘Do you want kids?’ instead of ‘When are you having kids?’ I think that’s incredible because everyone is entitled to how they feel about how they want to live their life and I’m so excited that it’s less of an expectation now.”

Sutton articulates how she wants to live her life in a devastating scene with Richard in the couples’ living room. The scene was a rare one for episodic television: seven pages of dialogue, and episode director Aprill Winney let the pair shoot it all straight through.

“We actually rehearsed it and blocked it beforehand as if it was a piece of theater. We just did the scene from beginning to end over and over and over again as they got it from different angles. It was definitely one of the more intense days I’ve ever had on set,” Fahy admits.

Equally intense was Richard leaving their apartment seemingly for good, his suitcase trailing behind him. After all their trials and tribulations, can’t Sutton and Richard just be happy?

“It’s not about how much they love each other. It’s about them having fundamentally different ideas about what their lives long-term look like,” says Fahy, who also acknowledges that it was painful on a personal level because it meant saying goodbye to scene partner Page.

The couple’s final love scene together was also intended to confuse audiences.

“You weren’t supposed to know if it was make-up or break-up sex,” says Fahy.

The actors worked with an intimacy coordinator for that scene, but in fact that position has been on set for the whole season.

“We were so grateful to have her there because those kind of situations can be so uncomfortable and hard to navigate and she made the whole thing so simple and easy for us,” Fahy says. “Intimacy is so much more than physical intimacy. She’ll give [us] tools to be able to separate [ourselves] from what [we’re] doing.”

Fahy also weighs in on Kat’s storyline with Ava (Alex Paxton-Beesley) in the “After-Show,” noting that the “we didn’t get to finish telling that story because COVID-19 happened.” Cutting filming short by two episodes means there is likely still more to explore for liberal Kat and her conservative new girlfriend, who defended her father’s funding of conversation therapy.

“That story has gotten a lot of fan reaction, and I get it. But we didn’t really get to finish, so that’s kind of tough. They had to kind of make the best with what they had,” she says before lightly comparing it to the Season 2 storyline where Sutton and Jane clashed over Sutton’s gun.

“It’s controversial. I think what the show always wants to try to do is not make judgments about people and have conversations and show a character who is capable of seeing a bigger picture.”

Watch Fahy on the Variety “After-Show” above.