Reporting While Black: The Complexity of Covering Racial Inequality as a Black Journalist 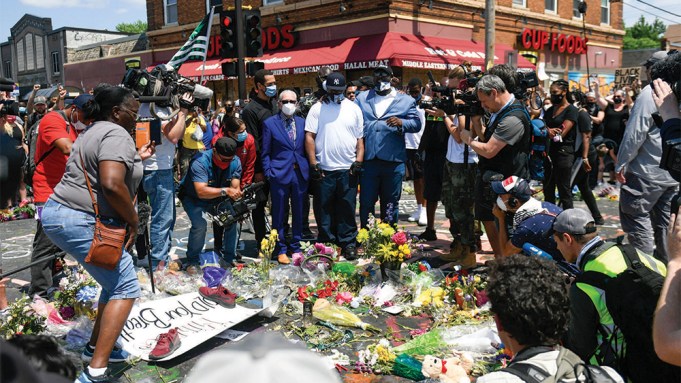 CNN national correspondent Sara Sidner has covered protests and civil unrest all over the world, and has in the past week been reporting on the aftermath of George Floyd’s death in Minneapolis for the network. Reporters being arrested is nothing new; as in past protests, members of the press have had encounters with law enforcement.

“[They] oftentimes, in these kinds of protests, don’t give a damn if you’re the press, even when you identify yourself,” she notes.

But things came to a head when her colleague, CNN reporter Omar Jimenez, as well as producer Bill Kirkos and cameraperson Leonel Mendez, were arrested and detained in the early hours of May 29. It was the first time, Sidner says, she has seen that happen to a reporter live on air.

Watching Jimenez being put into handcuffs on air was, to her, an illustration of the systemic racism that sparked the protests in the first place. While it is not conclusive that Jimenez was arrested because of his race, another CNN reporter, Josh Campbell, who is white, had been covering the same events a few blocks away and said that he had cordial interactions with Minneapolis police.

Reporters are often faced with tough situations. For Black journalists, covering Floyd and other issues of racial injustice bears additional layers of complexity, one that involves managing encounters with law enforcement while on the job, and processing the emotional toll it can take to cover these events in the first place.

Sidner, whose mother is white and father is Black, says that being a reporter of color has worked to her advantage when it comes to speaking with protesters, whereas her white colleagues are sometimes met with deep skepticism.

With police, the opposite is true.

“White colleagues are treated differently, and I may be looked upon as a troublemaker, right?” she says. “I don’t want to make this a blanket statement because there is no blanket statement. Every single interaction is with a different officer. I’ve had plenty of interactions where I am reporting in their face, right between them and the protesters, and had zero problems.”

The National Association of Black Journalists found, through a recent social media poll, more than 60 incidents between police and journalists covering the current protests. Those included being harassed, shot at with rubber bullets, tear-gassed and arrested without cause. On June 2, the Reporters Committee for Freedom of the Press sent a letter asking Minnesota officials to stop arresting journalists who identify themselves as such while covering protests, citing a number of incidents, including Jimenez’s. The letter is co-signed by 115 news organizations.

“Even as they identify themselves, are holding mics and cameras in their hands, they are being targeted as if they are conducting criminal activity,” says NABJ president Dorothy Tucker. “They are not only dealing with the fear of what is happening to the people around them but fear that they are under attack for simply doing their jobs.”

Harry Colbert Jr., the editor in chief of North News in Minneapolis, has covered three such cases and protests over police brutality in the last five years alone: that of Jamar Clark, the 24-year-old who was shot and killed by Minneapolis police in 2015; that of Philando Castile, the 32-year-old killed by a Minnesota officer in 2016 after being pulled over; and now Floyd’s death.

Covering the Castile protests in St. Paul, Colbert says he was threatened with arrest while trying to document a group of young Black men being harassed by the police, even after identifying himself as a member of the press. Previously, when he was a reporter in his hometown of St. Louis, his beat covered Ferguson and Jennings, Mo., including the Jennings Police Department — the same police force that once employed the officer who shot unarmed Black teenager Michael Brown Jr., and was ultimately disbanded.

“When I would cover Jennings, I’d call the Jennings Police Department and tell them, ‘I’m coming. This is my car; this is my license plate. Don’t pull me over,’” says Colbert. “And that was just to go cover a school board meeting or city council meeting.”

So seeing what happened to CNN’s Jimenez on air on May 29 wasn’t a shock.

CBS News “60 in 6” correspondent Wesley Lowery can also relate. While covering the Ferguson protests in August 2014, he was arrested and charged with trespassing when police ordered that he and fellow journalist Ryan J. Reilly clear out from inside a McDonald’s where they were reporting. The charges against Lowery and Reilly were later dropped.

Lowery explains that it’s a twofold challenge for journalists when instances like Jimenez’s arrest — and his own — occur, starting with the uncomfortable position of becoming the story you’re covering.

“And then you layer in the idea that when this happens to journalists of color, to a Black journalist on a story like this, they have to lay there at night and think about ‘Did this happen to me because I was Black?’” he says. “There’s like an entirely different source of anxiety and frustration and confusion that a lot of our other colleagues in the same instance wouldn’t have to think about.”

In addition to grappling with those differences, Lowery also cited the public blowback he endured after his experience in Ferguson, and how that contrasted with what Reilly, who is white, faced. “[His] Twitter mentions and my Twitter mentions in 2014 were very different places.”

But Lowery, a Pulitzer Prize winner, also stresses the benefits of his perspective as a Black journalist, noting the changing industry he works in, led by women and people of color versus the era of journalism that was “largely white, very male and very deferential to power and authority.” And Lowery’s journalism is different, using his distinct viewpoint to cover the current protests in Washington D.C. before heading to Minneapolis to report on happenings there.

“Journalism isn’t one size fits all,” Lowery says. “Our job as journalists is to use our eyes and ears to observe the world we live in. But the thing about our eyes and our ears is they are attached to the rest of our bodies. And the color of those bodies frames what we see and hear, what spaces we have access to, how the world treats us. What that means is the journalism is going to be different.”

KCRW reporter Cerise Castle also found herself in harm’s way after being shot in the arm by police with a rubber bullet while photographing the protests in L.A.

“As I was snapping photos, the police descended from their vehicle and began pointing rifles at the crowd. People started to run. I held my ground and continued to take pictures. This is when the shooting started, without warning or prior order to disperse,” she recalls.

Despite her injuries, Castle continues to report. For her, it’s about taking charge of the language being used around the protests and the people participating in them.

“I’ve found myself not wanting to leave work or step away for a break because I am afraid that without me there, something offensive or even racist will go on the air,” she says.

Freelance journalist Lexis-Olivier Ray was covering the Los Angeles protests on May 30, when he was hit by police officers with a baton.
Ray, who identified himself as press, has worked with the LAPD before. He has had to “suck up to [officers] and be a buddy,” something he found awkward when he was in front of protestors.

“I feel guilty for having that privilege at times,” Ray says. “I’m always aware of my position and I’m always there as a journalist. I’m never participating. I’m treating officers with respect. I identify myself as a journalist, and I’m there to work and document things.”

But the psychological weight of the job can grow heavy. The experience of covering police brutality against Black Americans has been “traumatic,” says North News’ Colbert.

“The thing is, I’m a journalist by profession but I’m a Black man by nature,” he says. “I can’t shed my Blackness, nor do I want to.”

After the 2016 press conference at which Hennepin County prosecutor Mike Freeman declined to charge the officers who shot Jamar Clark, “I walked out and I cried,” says Colbert. The May 29 press conference on Floyd marked the second time that his journalist’s stoicism fell away. He couldn’t stop the tears.

“Because it’s just traumatic,” he says. “I’m from St. Louis. I was living here in Minnesota, in Minneapolis, when Mike Brown was killed, but I know Ferguson intimately. And so I was feeling that pain. And you keep reliving the pain, each time you name a name. It keeps hitting closer and closer to home, when you’re talking about three times in five years, right here in the Twin Cities.”

CNN’s Sidner, an Emmy-winning journalist who has covered major national and international events, from the 2008 terrorist attacks in Mumbai to Ferguson in 2015, says she has yet to process bearing witness to some of these events.

“It’s pressed down to my toes. I can’t deal with it,” she says. Her voice cracks as the emotion swells. She adds, “Do I feel emotion while I’m working? Yes. I feel everything. Do I let myself deal with it? Absolutely not.”

Although those emotions do sometimes bubble to the surface.

While reporting live on May 31, anchor Don Lemon asked Sidner to connect members of the Floyd family with Minneapolis Police Chief Medaria Arradondo. Through her earpiece, they asked Arradondo if he thought all of the officers involved in Floyd’s death should be arrested and convicted. She relayed the questions to Arradondo.

Afterward, her voice quivering, she addressed Lemon and Floyd’s brother Philonise: “To hear the pain in the Floyd family’s voice and to have to convey that — I hope that I did the right thing for them, ’cause I know that they are hurting so, so badly.”