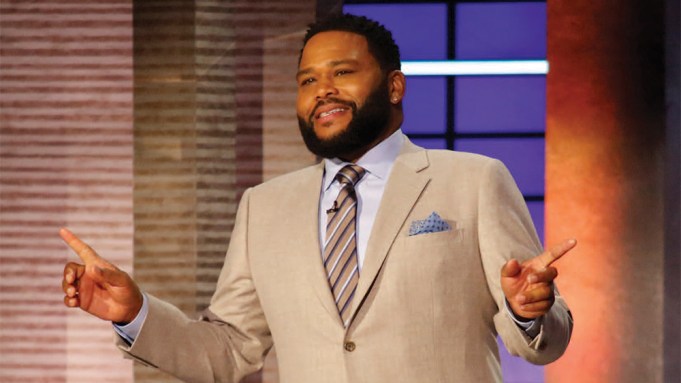 Anthony Anderson’s Hollywood career has been consistently characterized by successful pivots, from scene-stealing comedic roles to searing dramatic turns to effervescent hosting duties and many disparate points in between. But even he couldn’t have predicted his latest foray into the unforeseen, as the first person to receive a star on the Hollywood Walk of Fame in the midst of a global pandemic.

“I was looking forward to the pomp and circumstance that surrounds anyone getting a star on the Hollywood Walk of Fame, because not just anyone can or will get that,” Anderson says.

The multi-hypenate hoped to celebrate with his family and closest friends in the typical high-profile public ceremony that usually accompanies the honor. But “unfortunately that type of event can’t happen because of what’s happening in the world right now.”

Rest assured, though, eventually he’ll bask directly in the glow of his personal landmark on Hollywood Boulevard. “When the world does open up and when my star is on that Walk of Fame, we will have a party on that star!” he laughs. “I will go get a permit to shut down that part of the street, just so we can have our pomp and circumstance, so the fans and the public can enjoy it just as much as me and my family will enjoy it the day that it happens.”

Indeed, the honor carries considerable meaning for Anderson, who grew up in Compton fantasizing about finding his place in the showbiz firmament. “The Wiz” was the first movie he remembers seeing as a child at the Cinerama Dome, and a seminal moment occurred when 9-year-old Anderson watched his mother, Doris Day Bowman, who nurtured her own dreams of success as an actress, rehearse for a role in a production of “A Raisin in the Sun” at Compton Community College.

“I remember looking up from the back of the theater and just seeing my mom on stage with the actors, and I said, ‘This is what I’m going to do with the rest of my life,’” Anderson says. “Since I had that epiphany, that’s all I ever wanted, all I ever thought that I was going to do with my life and believed that that’s what my energy was created for and put on this earth to do: to have an effect on people’s lives with the work that I do. I believe that I am doing that, and I can honestly say that it started at that moment at [age] 9, 40 years ago.”

Anderson held tight to that vision, spending his senior year at the Hollywood Performing Arts Magnet School, literally steps away from where those inspiring stars lined the streets. At Howard University, training under groundbreakers including Ruby Dee and Ossie Davis, he honed his dramatic chops, but a flair for comedy was always apparent. And though early forays into standup fizzled, soon enough he established himself as a larger-than-life presence who brought an electric charge to every role he tackled in comedic films (“Life,” “Big Momma’s House,” “Me, Myself & Irene,” “Malibu’s Most Wanted”) to edgier fare (“Romeo Must Die,” “Exit Wounds,” “Cradle 2 the Grave”).

Anderson remembers the buzz building around him: “‘Who’s this new kid on the block? He’s not a comic, but he’s funny. We don’t know him from standup, but yet he’s holding his own next to Eddie Murphy and Martin Lawrence and Bernie Mac and Jim Carrey. Who is this guy?’”

Sensing opportunity, Anderson made a convention-defying move. “I’m not going to say people thought I was crazy, but they thought it odd and strange that when I had all of this momentum in the movie world that I wanted to do television,” he recalls. “But television is something that I always wanted to do, and it just happened in reverse for me.”

His heat allowed him to co-create his first TV sitcom, the short-lived “All About the Andersons,” tackle a breakthrough dramatic role on FX’s boundary-busting crime drama “The Shield,” and spend three seasons on the crime procedural “Law & Order.” Back on the big screen he delivered a formidable one-two punch, first in “Hustle & Flow” and then in Martin Scorsese’s “The Departed.”

“Before I was typecast, I wanted them to see there was more to me as an actor than just comedy,” he says. “People took notice — like, ‘Oh wow, he’s not just the fat funny guy! Wait a minute, there’s some depth to him!’”

What he wanted was to headline “Black-ish,” the ABC sitcom that’s proven not only wildly popular and freshly funny but also a significant voice reflecting the current Black cultural experience in America.

He and creator Kenya Barris “sat down and talked about what was missing from the landscape of television for us as viewers,” he says of the early days of “Black-ish.” “We talked about shows like ‘The Cosby Show,’ ‘All in the Family,’ ‘Good Times,’ ‘The Jeffersons’ — shows that had a point of view, but more importantly, had a character that had a point of view and was opinionated.”

“It’s exceeded our wildest expectations,” says Anderson of the devoted audience and critical raves that ensued — including six consecutive Emmy nominations for his performance. Now he holds the record as the most nominated Black performer in the same role in the lead comedy actor category. “I think the success is due in part to the authenticity and the honesty in which we tell these stories and create these characters. These characters are who we are. These stories that we tell are from our lives.”

Anderson has also added executive producer and director to his resume and emceed large-scale TV events including the BET Awards and the NAACP Image Awards, and is eyeing even more high-profile opportunities. (“The Golden Globes and the Emmys,” he says.) His facility as a witty, winning game-show guest earned him a stint hosting “To Tell the Truth” — with mom Bowman as scorekeeper and comic foil. (“She had me at 17 years old and had to put her dreams of being an actor on hold,” he says. “I just want to be able to elevate her and take her as far as she wants to go.”) Late-night television is in his sights, having recently guest-hosted “Jimmy Kimmel Live!” (“I’ve always wanted my own talk show,” he says, admitting to campaigning for Kimmel’s rerun-driven Friday night slot.)

But Anderson’s inner 9-year-old is definitely savoring the moment, he assures. “It’s surreal in a way to see where I’ve come from, the work that I put into this and that I still put into this, and then it all culminating in and having that work paid off with a star on that same Hollywood Walk of Fame,” he says. “You couldn’t write a story better than that.”