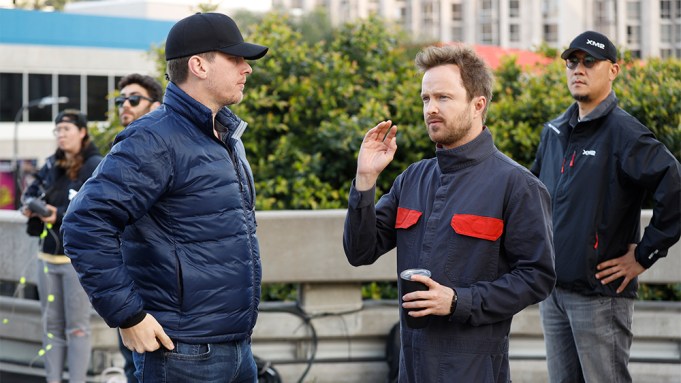 When Aaron Paul joined HBO’s “Westworld” for its third season, which premiered March 15, he was a “crazy fan” of the show. But executive producers Lisa Joy and Jonathan “Jonah” Nolan didn’t ask him to play one of the show’s sentient robots rebelling against humanity. Instead, he portrays a human named Caleb, a military veteran struggling to eke out a living in Los Angeles circa 2058, when he crosses paths with Evan Rachel Wood’s avenging android Dolores. For Paul, the star of “Breaking Bad” and “The Path,” Caleb’s disconsolate life was relatively familiar territory — and the Emmy-winning actor wouldn’t have it any other way.

How are you dealing with the coronavirus — professionally, you have to talk to a lot of strangers and travel a lot, so how do you feel about all that?
It’s so wild, what’s happening. This is the kickoff of the press tour of “Westworld.” I was supposed to go to Brazil after the L.A. premiere. That was canceled, and then SXSW was canceled. I’m washing my hands a lot more. But also, I’m kind of into this [puts hands together in prayer motion] and not really this [extends hand for a handshake]. Just like, you know what, I respect you, but let’s keep our distance. It’s a scary thing. I think it’s good to be clean and safe.

OK, on to “Westworld”! When we meet your character Caleb, he’s in a really dark place.
You think? [Smiles]

You are a generally ebullient, happy person, but you’ve played several characters who’ve found themselves facing a dark path.
I know there’s some sort of throughline here. I just gravitate toward characters that are just being dragged through the mud, you know? I don’t know why. It’s fun for me to zip on a completely different skin than I’m used to wearing on my day-to-day. I’m madly in love. I have the most beautiful little baby girl. It’s nice to just get all messy at work.

When Lisa and Jonah asked me to be a part of it — I mean, I know they know my work. And so I could only imagine it’s gonna be something in my wheelhouse, you know? It’s not gonna be like this slapstick sort of comic relief of “Westworld.” When they pitched me their idea, of course I was blown away. And my God, they gave me so much fun stuff to play with.

What’s your self-care for playing these dark people? How do you shed that at the end of the day?
I go read my baby girl like 15 books at night and I get into that world. The blessing with this show, it’s a huge cast, and so there are some weeks that I don’t even work. And so I go to the mountains of Idaho and take my family and just enjoy nature. And I don’t know, I hate saying it, but I feel like it’s a form of emotional release. I’m not crying on a day-to-day [basis] in my life. I mean, we’ve all been affected by love and loss in big ways. But I feel very fortunate that I haven’t had to deal with that all that much. So it’s nice to feel these heavy emotions.

AGE: 40
BIRTHPLACE: Emmett, Idaho
PERMANENT MEMORY: Paul and his “Breaking Bad” co-star Bryan Cranston both got tattoos to commemorate the end of the show.
THE PRICE WAS WRONG: In 2000, he made it to the showcase showdown on “The Price Is Right,” but lost with a $132 overbid.