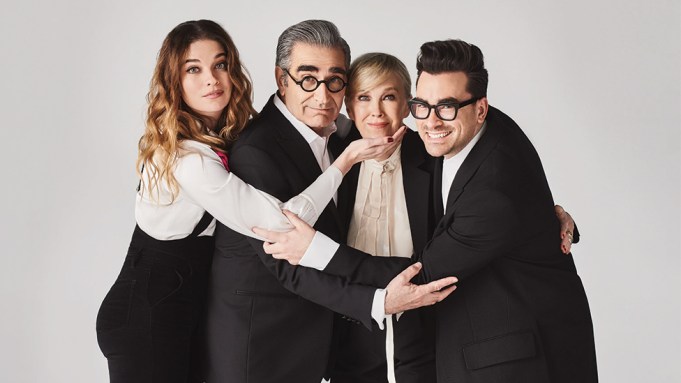 With the win, the show swept all of the major comedy categories at this year’s Emmys. Stars Eugene Levy, Daniel Levy, Catherine O’Hara, and Annie Murphy all won for acting in the show, while Daniel also won for writing and directing, sharing the latter with Andrew Cividino. This means “Schitt’s Creek” is the first series to win every major comedy series award.

The final season was full of high-highs for the beloved Rose family: David’s (Levy) wedding, Alexis (Murphy) striking out on her own, Moira’s (O’Hara) movie success and Johnny’s (Levy) new business franchise. Its Emmy success (15 overall nominations, more than tripling its haul last year) kept those highs going. Now the series has picked up its first-ever and biggest Emmy Award.

This was the first time a family sitcom won the comedy series category since “Modern Family” in 2014.

To take the comedy series trophy, “Schitt’s Creek” bested NBC’s “The Good Place,” Amazon Prime Video’s “The Marvelous Mrs. Maisel” (a previous winner), FX’s “What We Do in the Shadows,” as well as two HBO shows: “Curb Your Enthusiasm” and “Insecure,” and two Netflix shows: “Dead To Me” and “The Kominsky Method.”