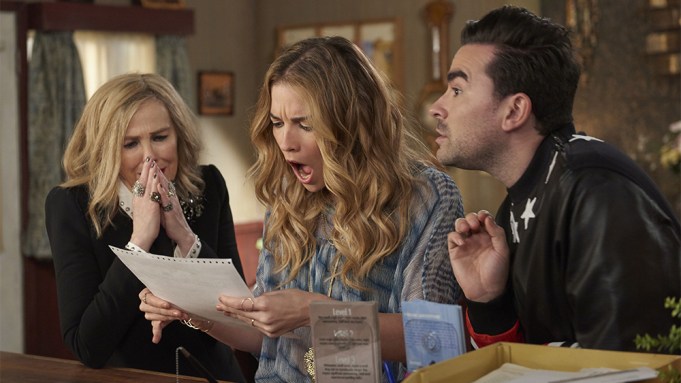 Just a week before the Emmy nominations were announced, “Schitt’s Creek” star Catherine O’Hara didn’t think she would be lauded again.

“I did ‘For Your Consideration,’ after all,” O’Hara told Variety at the time, referencing the 2006 Christopher Guest mockumentary in which she played a veteran actress who industry prognosticators said had Oscar buzz around her for her latest film, only to have her heartbroken when the phone never rang with the notification of, let alone congratulations for, a nomination.

The difference, of course, is that the buzz for the the movie-within-the-movie was at-first created just to make those working on it feel better about the work being done on it, and it snowballed out of control. “Schitt’s Creek,” on the other hand, has not only been beloved by the audience (critics and fans alike) since its 2015 debut, but it also received a quartet of nominations from the Television Academy last year for its penultimate season.

Now, the final run of the Pop TV family comedy has picked up 15 total nominations, almost quadrupling its haul from last year.

After hearing of the nominations, O’Hara told Variety it was a “lovely surprise.”

“A few years ago Eugene said that I should get on Twitter so I can read what people on Twitter say about our show, and they are the kindest people in the world. It’s given me comfort reading what people say about the comfort the show has given them during these months,” she continued. “And I think it somehow gives us some hope — I mean, it’s a fictional world – but I think it gives hope that someday we can actually live in a world like that, full of laughter of course, but also full of love for each other and acceptance.”

“It’s all very strange and wonderful. There were pancakes, and there was bacon, and now there’s a mimosa happening. So it’s been a real good morning so far,” said Murphy. “I was just beaming when the announcements were being made because this last season of the show, there have been so many incredibly talented human beings who have been a part of it. So having hair and makeup and writing and costumes and directing, and people getting recognized all across the board who have been working so, so hard for the past six years — it means so much to be on that list with those people that I love so much.”

Last year, “Schitt’s Creek’s” four nominations put Pop on the map in a more mainstream way, as they were the network’s first-ever Emmy attention. This year’s noms come not only after the show signed off (on April 7), but also after the Viacom-CBS merger that has seen a shift in the company’s series strategy. Now, the focus is on intellectual property that is owned and controlled by the company, which resulted in the shelving of a number of other originals earlier this year.

The last show standing on Pop at the moment is “One Day at a Time,” which the cabler picked up for a fourth season after Netflix canceled it in 2019. That reboot of the classic Norman Lear sitcom of the same name nabbed three consecutive comedy multi-camera editing nominations (winning once, in 2019) during its Netflix run. This year it scored the same nomination again as well.