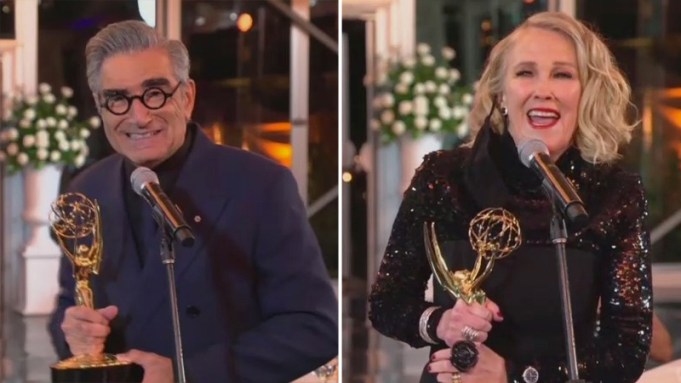 O’Hara won for lead actress in a comedy, for her portrayal of Moira Rose, in her second consecutive nomination for the hit sitcom. Her only previous Emmy win comes from variety program writing in 1982, as a part of the “SCTV” team. However, through the years she has nabbed four other writing noms and a supporting limited series/TV movie acting nom (in 2010 for “Temple Grandin”).

Levy won lead actor in a comedy for his role of Rose family patriarch Johnny in the final season of “Schitt’s Creek,” which he co-created with his son Daniel Levy. He was also nominated in the comedy series category, as an executive producer on the show. This was Levy’s second consecutive nomination in both categories. Previously, Levy won two writing Emmys in the variety or music program category for his time as part of the “SCTV” staff. Both of those were earned in the 1980s.

For both actors, the wins marked their last chances to take home an Emmy for “Schitt’s Creek,” as the series wrapped up this year.

“I’ll forever be grateful to Eugene and Daniel Levy for giving me the opportunity to play a woman of a certain age, my age, who gets to be fully her ridiculous self,” she said. “They gathered the most beautiful, fun-loving people in Toronto, cast and crew, and then, by example, led us to be the best we can be for each other.”

She also offered a bit of encouragement to those stuck at home during the pandemic.

“Though these are the strangest of days, may you have as much joy being holed up in a hole or two with your family as I had with my dear Roses,” she said.

Levy, meanwhile, joked about the straight-edge role that finally won him TV’s top acting honor after decades of classic performances in film and on television.

“I guess it’s kind of ironic that the straightest role I ever played lands me an Emmy for a comedy performance,” he said. “So now I seriously have to question just what I’ve been doing for the past 50 years.”