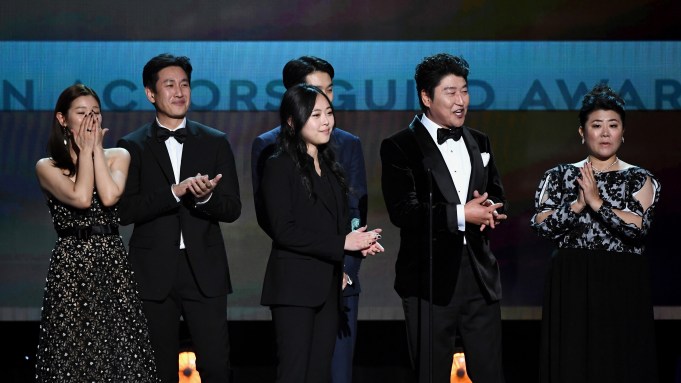 The Screen Actors Guild Awards are always the first major peer group ceremony of the new year, giving those who make films and television series the chance to celebrate each other. Going into the 26th annual ceremony, which took place Jan. 19, the nominees were a mix of industry veterans and beloved favorite and some newer-comers, notably on the small screen side of the ballot.

With 160,000 voting members, SAG is such a large organization that it can be hard to predict what they may celebrate in certain categories. Both the film and television side of the ballot had seeming favorites and frontrunners going into the race — from “Once Upon a Time in Hollywood” and Renee Zellweger on the film side, to Amazon Prime Video’s “Fleabag” and Netflix’s “The Crown” for TV — but when that large a populace have a say in the results, anything can happen.

Barring one massive surprise from “Parasite,” the film awards played out as expected, with season champs Laura Dern (“Marriage Story”) and Brad Pitt (“Once Upon a Time in Hollywood”) winning best supporting actor in a motion picture in male and female categories. Also as expected, Renee Zellweger sang happy as best actress for her turn in “Judy.”  Joaquin Phoenix took best actor for “Joker.”

Then, for television, Emmy and Golden Globe darling “Fleabag” only won one of the three categories for which it was nominated (female comedy actor for creator-star Phoebe Waller-Bridge), while “The Crown” won drama series ensemble but both Olivia Colman and Helena Bonham Carter, nominated in the female drama actor category, lost to “The Morning Show’s” Jennifer Aniston.

Here, Variety breaks down the biggest snubs and surprises of the 26th Annual SAG Awards.

SURPRISE: “Parasite,” Best Performance by an Ensemble in a Motion Picture

Who could have seen Bong Joon Ho’s socioeconomic thriller “Parasite” creeping up from the basement to pull the rug out from under “Once Upon a Time in Hollywood”?  That the actors union would award the night’s top honor to a group of relative unknowns over long-beloved stars and iconic talent like Quentin Tarantino, Brad Pitt, and Leonardo DiCaprio speaks to the undeniable quality and momentum of the South Korean award sensation.
“The story is about coexistence and how we can all live together,” said Song Kang-ho, one of the film’s lead. “To be honored with a best ensemble, it occurs to me maybe we haven’t created such a bad movie,: he joked. Between last night’s Producers Guild Award win for “1917” and this upset,  stakes for the Best Picture Oscar race has been raised.

SURPRISE: Sam Rockwell, “Fosse/Verdon”
After losing the Emmy to “When They See Us’s” Jharrel Jerome and the Golden Globe to “The Loudest Voice’s” Russell Crowe, Rockwell, himself, was surprised to be standing on-stage to accept the actor statue after his co-star, the Emmy and Globe-winning Michelle Williams did earlier in the ceremony. This marked Rockwell’s first win for the role and last opportunity to be celebrated for it, since the FX biopic was a limited series. It was his first win in TV but career-third SAG win, after picking up the 2018 film ensemble and supporting actor statues for “Three Billboards Outside Ebbing, Missouri.” He was also nominated at the 26th Annual SAG Awards as part of the ensemble of “Jojo Rabbit.”

SNUB: Olivia Colman, “The Crown”
The previous two times the actor portraying Queen Elizabeth in the Netflix royal family drama was nominated in this category, she won. Both times, she was played by Claire Foy. But in the third season, Colman stepped in to take over the role and seemed a shoo-in to take the trophy. After all, she is already well-decorated for playing royalty: Not only did she earn a SAG nomination last year for her film work in “The Favourite,” but she also won the Golden Globe and Oscar for that role, and she also just picked up the Globe for this role earlier this month.

SURPRISE: Candid Brad Pitt
That Pitt would win for “Once Upon a Time in Hollywood” was a no-brainer, and this final push of momentum from SAG all but guarantees he will climb the stairs at the Dolby Theater and accept the Oscar in February. Pitt’s candor and openness about his life and his work in the speech was what woke up the ballroom and backstage, though. Playing a glorified handyman and stunt performer in “OUATIH” was, Pitt joked, a “huge stretch” for him — after which the SAG show directors directly cut to Jennifer Aniston’s bemused face. In thanking his costars, he listed the feet of Margaret Qualley and Dakota Fanning. “Let’s be honest, Quentin has separated more actresses from their shoes than the TSA,” he said. This version of Pitt, a salty dog who still has his movie star glow, has not been trotted out to such great effect all season.

SNUB: “The Kominsky Method” and “Stranger Things”
Both Netflix shows came into Sunday’s ceremony with three nominations each, tying for second-most nominations by series (alongside “The Crown,” “Fleabag,” “Game of Thrones” and “The Morning Show”). Chuck Lorre’s comedy, “The Kominsky Method,” couldn’t have picked up a trophy for each of its three nominations because two of them were in the same category. (Alan Arkin and Michael Douglas were both nominated in the male comedy actor category, and the show was also up for the comedy series ensemble statue.) But it won neither. And the Duffer brothers’ 1980s-set sci-fi drama, “Stranger Things,” which saw noms for drama series ensemble, male drama actor (for David Harbour) and stunt ensemble, also came up with a goose egg.

SURPRISE: “The Marvelous Mrs. Maisel”
Even though the Amazon series won this award last year, pundits were predicting “Fleabag” would take it after it won the comedy series Emmy and Golden Globe. Even female supporting actor Alex Borstein was surprised by the win: Taking the stage to accept the trophy, she said she voted for the streamer’s other comedy and didn’t even vote for her cast mates Rachel Brosnahan or Tony Shalhoub, who were nominated in the female comedy actor and male comedy actor categories, respectively, this year. (Shalhoub won his category.) Brosnahan also called this win “a mistake.”

UPDATE: This story has been corrected to reflect Sam Rockwell’s prior two SAG Award wins.