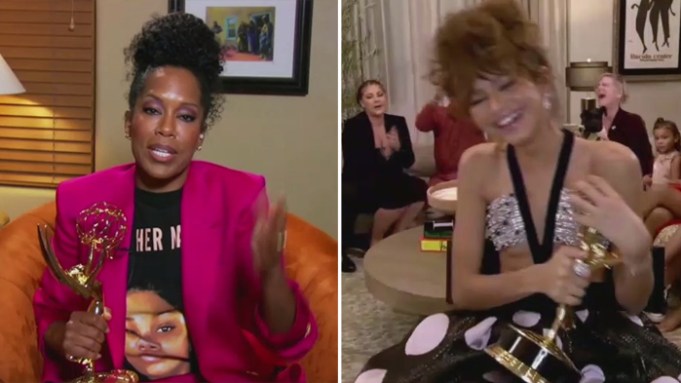 Out of the 18 acting awards handed out at the 72nd Annual Primetime Emmy Awards, nine of them went to Black actors, which gives the performer parity with white actors, as no other people of color won this year.

This is a notable increase from last year, when 11.11% of acting winners were Black (16.67% BIPOC winners overall). All in all, the Television Academy has come a long way in the last few years: in 2013 there were zero BIPOC winners in the acting categories.

History was also made with Zendaya’s lead drama actress win for HBO’s “Euphoria.” It was also only the second time in the awards’ seven-plus decade history that a Black woman won that category. The first was Viola Davis in 2015 for “How To Get Away With Murder.”

Additionally, Rudolph picked up not only her first-ever Emmy win but also her second: She won the character voice-over and guest comedy actress awards, for Netflix’s “Big Mouth” and NBC’s “Saturday Night Live,” respectively during the Creative Arts ceremonies. And, Ron Cephas Jones picked up his second-ever Emmy for NBC’s “This Is Us” (in the guest drama actor category) while his real-life daughter Jasmine Cephas Jones won the short form comedy or drama statue for Quibi’s “#FreeRayShawn”; they were the first parent-child duo to win an Emmy during the same ceremony, receiving their awards on the final night of the Creative Arts ceremonies on Saturday. (However, “Schitt’s Creek’s” Eugene Levy and Daniel Levy followed this up immediately on Sunday.)

“Black-ish” star Anthony Anderson appeared during the Emmys broadcast to talk about the record year and explain that this weekend was supposed to be like an NBC All-Star Weekend for Black entertainment industry professionals. But “because of COVID we can’t even get in the damn building,” he said. “These Emmys would have been so Black, it would have been like hot sauce in your purse Black, Howard University homecoming Black, ‘you fit the description’ Black. We would have had speeches quoting our great poets like Maya Angelou, Langston Hughes, Cardi B.”

Instead “of that sexy melanated energy,” he continued, “here I am alone in a sterilized green room trying not to sneeze on a damn llama.” (Kimmel corrected him that it was actually an alpaca that had appeared on the show.)

“This isn’t what it should have been, but I’m still rooting for everybody black because black stories, black performances and black lives matter,” Anderson said.

These categories are often won by multiple people sharing a nomination, so when it came to individual people, the breakdown was 2.13% Black, 3.2% BIPOC overall and 3.2% women in writing overall, and 2.1% Black, 4.2% BIPOC and 4.2% women in directing overall.

“I don’t want to discount what it means for Black performers to be recognized in ways that they should be recognized and to have opportunities for their work to be seen and appreciated and respected the way it should be. But I do think that what we have to recognize is that we can’t mistake presence for power,” Color of Change president Rashad Robinson previously told Variety. “Power is the ability to change the rules. Presence is not bad, but when we mistake presence for power, we can sometimes think something has happened that hasn’t actually happened.”

He continued: “As we think about API and Latinx communities and the dismal representation they have on television and at awards shows, I do think in so many ways it illustrates a supremacy in terms of who’s in charge, what is normal and what is additive. It’s like, ‘Oh we’re going to do something for this community this year,’ but even the act of doing something for someone else creates who is mainstream and who is [on the] margins — who is inside and who needs to be let in.”