From ‘The Crown’ to ‘Chernobyl’: Predicting the 2020 Golden Globe TV Winners 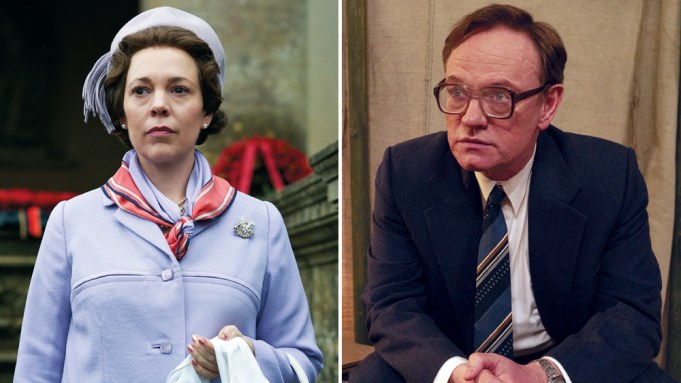 The Golden Globes aim to surprise, so predicting winners should always be taken with a grain of salt. That’s especially true with a voting body as small as the Hollywood Foreign Press Assn., which boasts fewer than 100 members.

Nonetheless, there are certain quirks to be found among HFPA voters that might give a hint to which way they’re leaning, especially given past picks. Starting in the drama series category, the easy choice is Netflix’s “The Crown.” It’s a show about British royalty, and stars modern acting royalty: Olivia Colman. The show won the drama series Globe in 2017 (for the 2016 calendar year), when it also awarded then-star Claire Foy in the drama actress category.

But should the Globes voters want to mix things up, this is an opportunity to award HBO’s buzzy “Succession” before the Emmys have a chance. And although it’s also the first opportunity for Apple TV Plus’ “The Morning Show” to pick up a trophy, its mixed-to-negative reviews likely mean that the big win was just being nominated.

Among drama actress nominees, the aforementioned Colman has a leg up: She just won a Globe last year, as musical or comedy film actress for “The Favourite,” and also a TV supporting actress Globe in 2017 for “The Night Manager.” “The Morning Show” stars Jennifer Aniston and Reese Witherspoon will likely split the vote, while Jodie Comer (“Killing Eve”) isn’t expected to repeat her Emmy win, and Nicole Kidman is also canceled out by her “Big Little Lies” co-star Witherspoon.

Drama actor is a harder one to predict: “Pose’s” Billy Porter has all the momentum, but if HFPA voters truly adore “The Crown,” Tobias Menzies could surprise. “Succession” star Brian Cox is a scene-stealer, while “Game of Thrones” star Kit Harrington and previous winner Rami Malek (“Mr. Robot”) are less likely.

In comedy, last year’s series winner, “The Kominsky Method,” isn’t expected to repeat, as the draw of Phoebe Waller-Bridge’s “Fleabag” and its dominant Emmys showing, may be too hard to ignore. The spoiler here could be Ryan Murphy’s “The Politician,” the kind of comedy/drama/musical/camp combo that HFPA voters have rewarded in the past — having given Murphy’s “Glee” back-to-back wins a decade ago. “The Marvelous Mrs. Maisel,” which won in 2018 (for the 2017 year) could also pop back up, but it and “Barry” will likely be rewarded on the acting side instead.

Indeed, the titular “Mrs. Maisel,” Rachel Brosnahan, could be in line for her third consecutive Globe victory as comedy actress — making it the first three-peat since Sarah Jessica Parker did it with “Sex and the City.” But the aforementioned Waller-Bridge might also break her streak, setting up another battle of the Amazon Prime Video stars. Natasha Lyonne (“Russian Doll”), Kirsten Dunst (“On Becoming a God in Central Florida”) and Christina Applegate (“Dead to Me”) likely can’t touch the showdown between Brosnahan and Waller-Bridge.

On the comedy actor side, it feels like “Barry” star Bill Hader’s turn, although incumbent winner Michael Douglas could also repeat. If the Globes really do embrace “The Politician,” then Ben Platt is the kind of uber-talented star the HFPA loves. It was exciting to see “Ramy” star Ramy Youssef and “Living With Yourself’s” Paul Rudd get nominated, but they will have to make do with that.

As for limited series or TV movie, the disappointment of Netflix’s “When They See Us” not getting nominated still stings. It would have been a chance for the Globes to give the Ava DuVernay program its due. Instead, HBO’s Emmy dominator “Chernobyl” seems like the front-runner here over FX’s “Fosse/Verdon,” Showtime’s “The Loudest Voice,” Netflix’s “Unbelievable” and Hulu’s “Catch-22.”

And with Emmy winner Jharrel Jerome not nominated, “Chernoby’s” Jared Harris is likely in line for the limited series/TV movie actor award, but watch out for Globes fave Sacha Baron Cohen (“The Spy”) or “The Loudest Voice’s” Russell Crowe, whose transformation into Fox News boss Roger Ailes was extraordinary.

“Fosse/Verdon” Emmy winner Michelle Williams will likely repeat in the limited series/TV movie actress category, although Helen Mirren (“Catherine the Great”) has been nominated 16 times — winning three — at the Globes, so clearly she has some fans in the HFPA. “Unbelievable” stars Merritt Wever and Kaitlyn Dever will likely cancel each other out and “The Act’s” Joey King is bubbling under.