Emmys 2020: How Final Seasons Including ‘Schitt’s Creek,’ ‘The Good Place’ Fared With Noms 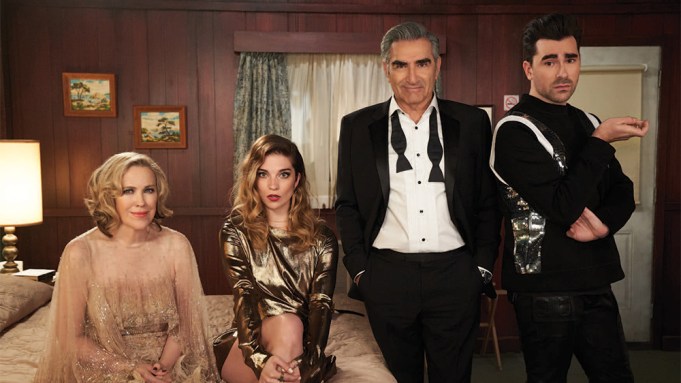 A whole host of shows signed off with tearful goodbyes this year, but only a couple have been handed big shots at Emmys gold to reward their curtain calls.

The final season winner is undoubtedly Pop’s “Schitt’s Creek,” which scored a staggering 15 nominations, placing it in a tie for fifth place in the overall program rankings.

Once a relatively little-known comedy that began on Canadian television, “Schitt’s Creek” rode a wave of critical and word-of-mouth support, as well as a streaming bump, to become one of the most-talked-about series of the year. Those 15 nominations, including comedy series and a quartet of acting noms for its leads Eugene Levy and Catherine O’Hara and supporting players Dan Levy and Annie Murphy, are worthy recognition for six seasons of consistent hilarity from the Rose family, as well as an emotional, satisfying ending.

Danson’s nom marked his third consecutive for the role of Michael, a demon who got his chance to be human in the moral philosophy series’ final moments. Harper and Carden both scored their first-ever Emmy nominations this year, while Maya Rudolph rounded out the acting noms with her third consecutive nod in the guest comedy actress category for playing the Judge.

Fellow NBC comedy “Will & Grace” was right behind with five nominations for the final season of its revival, all in below-the-line categories.

On the drama side, USA’s “Mr. Robot” only scored one nomination (in an interactive category) for its fourth and final outing. And similarly, the eighth and final season of the Showtime terrorism series “Homeland” only picked up a nom for directing (for Lesli Linka Glatter).

Also on the list of final seasons that received one nomination are Netflix’s “BoJack Horseman” and “Orange Is the New Black,” HBO’s “Ballers” and “Silicon Valley” and ABC’s “How to Get Away With Murder” and “Modern Family.”