Emmys 2020: Making the Case for ‘The Marvelous Mrs. Maisel’ and ‘Schitt’s Creek’ for Comedy Series 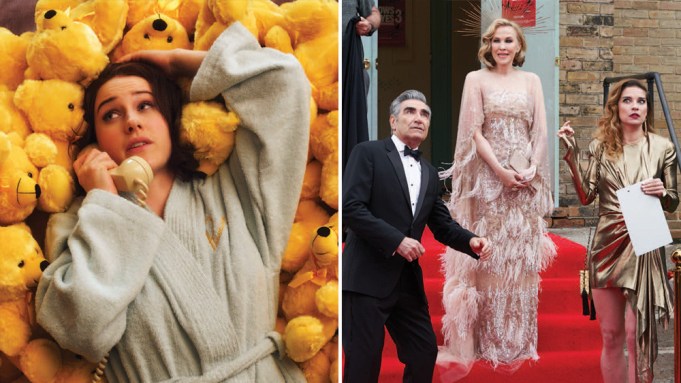 Sometimes, the laugh’s on us. Last year, at the start of Emmy campaign season, most pundits believed it would be a race to the finish between Amazon Prime Video’s “The Marvelous Mrs. Maisel,” which had won in 2018, and the final season of HBO’s “Veep,” a three-time winner itching to take back its crown. But then came the “Fleabag” phenomenon, winning comedy series, lead comedy actress and more accolades.

This year, it’s less likely that a dark horse will rise and leap ahead of the two front-runners, although FX’s “What We Do in the Shadows” was such a surprise nomination that it remains a hot topic, giving it a boost of visibility in recent weeks. Also breaking through are HBO’s “Insecure” and Netflix’s “Dead to Me,” which have both enjoyed lead actress nominations but finally can add series nods — and both are coming off strong seasons that aired right as FYC season began. Netflix’s “The Kominsky Method” won a Golden Globe and added a series Emmy nod this year despite a less-buzzy sophomore year. “Curb Your Enthusiasm” lands its ninth nom in the category, and “The Good Place” ends its run with its second consecutive notice. But in the end, it comes down to voters feeling “Marvelous” or liking “Schitt’s.”

The Case for “Schitt’s Creek”
The rise from obscure basic cable comedy to Emmy darling is fascinating, and can be attributed in part to the Pop series’ availability on Netflix — where viewers binged and fell in love with the eccentric Rose family and the denizens of the town they own. The show hasn’t yet won any Emmys, and before this year had been only nominated for four — all in 2019. But now, in its farewell season, it has cleaned up with 15 noms, including for lead actor (Eugene Levy), lead actress (Catherine O’Hara), supporting actress (Annie Murphy), supporting actor (Daniel Levy), as well as in writing and directing. It’s a feel-good phenomenon, a laugh-out-loud comedy that is the perfect watch during these uncertain times. Throw in two comedy legends at the helm in Levy and O’Hara — both also front-runners — and “Schitt’s Creek” may be the celebration voters are eager to instigate.