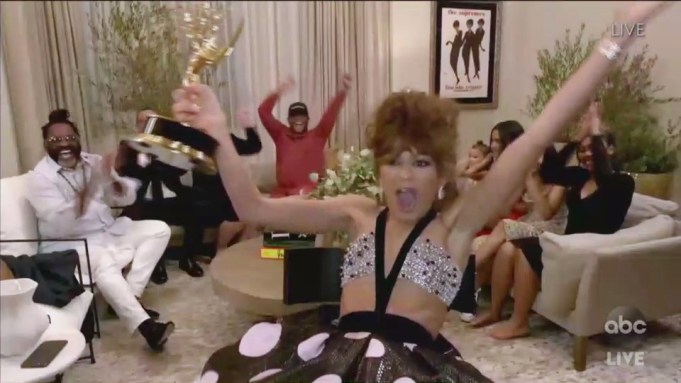 Canadian family comedy “Schitt’s Creek” swept the 72nd Annual Primetime Emmy Awards, something that prognosticators and many more casual television fans alike were predicting leading up to Sunday’s show, given that its 15 nominations were the final ones the show could earn after signing off this spring.

“Schitt’s Creek” won nine overall awards (between Creative Arts ceremonies that took place Sept. 14-19 and Sunday’s festivities on ABC) and set the tone for an evening that was limited on surprises when it came to winners. “Watchmen” nearly swept the limited series categories and picked up 11 Emmys overall, while “Succession” virtually dominated drama and nabbed seven Emmys in total.

Instead, more of the surprises this year came from elements of production. Due to the ongoing coronavirus pandemic, the ceremony was produced virtually, with host Jimmy Kimmel delivering his part of the show in the Staples Center in Downtown Los Angeles. But instead of facing an audience of thousands of industry professionals, the majority of Hollywood was in their own homes. The Television Academy and ABC boasted the show would include 138 stars in 114 locations in 10 countries. (To aid with this, the Academy sent production kits to those participating at-home.)

Additionally, some winners who did receive their actual statues in-person tonight were delivered them by presenters wearing hazmat suits to ensure the safety of everyone involved, while others received boxes in the mail that released their Emmys — and confetti.

It will truly go down as an awards ceremony like no other.

Here are the biggest snubs and surprises of the 72nd Annual Primetime Emmy Awards:

The awards behemoth and the most-nominated comedy of the year are both proven Academy favorites. (Just last year, that show picked up eight statues, including supporting comedy actor and actress, for Tony Shalhoub and Alex Borstein, respectively.) But on the Sunday night broadcast, neither picked up any statues. Amazon’s total tally this year came all from Creative Arts, where the streamer picked up four trophies.

Perhaps this was an instance of co-stars sharing the same ballot and splitting the vote, but the trio of “Succession” stars nominated for supporting drama actor — Nicholas Braun, Kieran Culkin and Matthew Macfadyen — lost the statue to “The Morning Show” star Billy Crudup, despite them being top of the list for many pundits all throughout the voting period. In the supporting drama actress category, Sarah Snook wasn’t nominated against another co-star, but she didn’t win either.

The young star of the HBO high school drama was nominated against heavy hitters including Oscar-winner Olivia Colman; the incumbent in the category, Jodie Comer; and three-time consecutive nominee Sandra Oh (to name a few). But she took the trophy, becoming the youngest, and second-ever Black woman, to win the category.

Oftentimes, series finales have that extra pull for Emmy voters that can put veterans over the top. Linka Glatter fit that bill exactly for her masterful helming of the much-praised “Homeland” closer. She’s had six noms in the drama series directing category 2010 for “Mad Men” — and has never won. This also closes out “Homeland’s” shot at Emmy gold, since it came to an end earlier this year. But voters were swayed by “Succession” and gave the gold to Andrij Parekh.

The German actor and director won the limited series/TV movie/dramatic special directing award for the four-part Netflix limited series. This was the first-ever television series she directed, and she faced stiff competition from a trio of “Watchmen” directors, the late Lynn Shelton and Oscar nominee Lenny Abrahamson.

The uber-streamer had the most Emmy nominations of the year, and by a lot (160 to HBO’s 107). It also had one of the two series tied for the most-nominated dramas (“Ozark”). But during Sunday’s broadcast, Netflix only won two of the awards handed out (supporting drama actress for “Ozark” star Julia Garner and limited/movie/special directing for “Unorthodox”).

Before presenting the first award of the night, the duo performed an elaborate bit about sanitizing the envelope with the winner’s name in it, which included setting fire to it in a wastepaper basket to burn off the germs. Someone was standing by off-camera to hand Aniston a fire extinguisher, but she didn’t get all of the flames right away, and it erupted anew. Neither she nor Kimmel noticed it right away, focused on their task at hand, but remaining exceptionally calm under pressure, a second later, she put it out and the show continued without any casualties.

Although the Pop comedy was heavily favorited to win this year, Murphy was not a shoo-in because she was nominated alongside the two-time incumbent winner, Alex Borstein from “The Marvelous Mrs. Maisel,” who was once again a front-runner this year.

SURPRISE: Randall Park and an alpaca

The “Fresh Off the Boat” and “Always Be My Maybe” actor was on-site at the Staples Center to present an award — with an alpaca. It had to be a complicated and potentially expensive bit, and it was all so Park could read a joke about reading an email too fast and thinking he was going to present with Al Pacino.