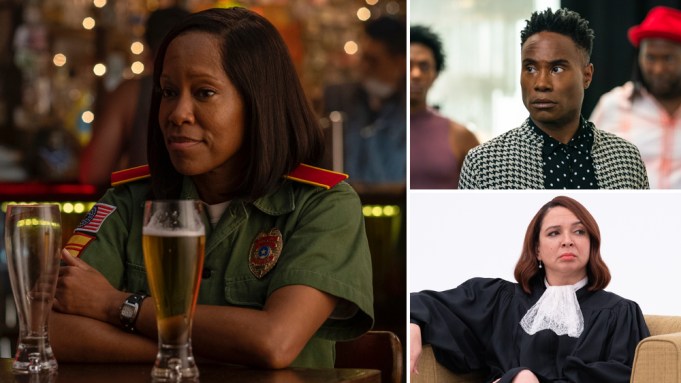 The Television Academy nominated a record number of Black actors for Emmys on Tuesday morning, with 34.3% of the acting nominees being Black.

There were 102 acting nominees this year across lead, supporting and guest categories for drama, comedy and limited series/TV movie. Thirty-five of those slots went to Black actors (notably, Maya Rudolph actually accounts for two of those slots, being nominated against herself in the guest comedy actress category for her work on both “The Good Place” and “Saturday Night Live”).

This is a notable increase from last year, when Black actors made up 19.8% of the nominee pool, as well as an increase from 2018, when there were 27.7% Black actors nominated — the previous highest percentage in the Academy’s history.

“2020 isn’t just about the global health crisis. This year we are also bearing witness to one of the greatest fights for social justice in history, and it is our duty to use this medium for change. That is the power and responsibility of television — not only delivering a multitude of services or a little escapism, but also amplifying the voices that must be heard and telling the stories that must be told. Because television, by its very nature, connects us all,” said Frank Scherma, chairman and CEO, Television Academy, at the start of the nominations announcement.

The writing categories fared better than directing, but only marginally, when it came to parity. Not including the variety series writing category which lists entire staffs on the ballots, the select writers scoring noms in the drama, comedy, limited series/TV movie/dramatic special, variety special and documentary or nonfiction program consisted of 40 people, 13 of which were women. This is 32.5% women nominees (67.5% men). The limited series/TV movie/dramatic special category is what really made the difference, with six of nine nominees here being women, including “Unorthodox’s” Anna Winger and “Normal People’s” Sally Rooney and Alice Birch.

Out of the seven directing categories, there were 47 nominees, 15 of which were women for a percentage of 31.9. Once again, the limited series/TV movie/dramatic special category was the only one to hit parity here, with four out of six nominees being women, including the late Lynn Shelton receiving a posthumous nod for “Little Fires Everywhere.”