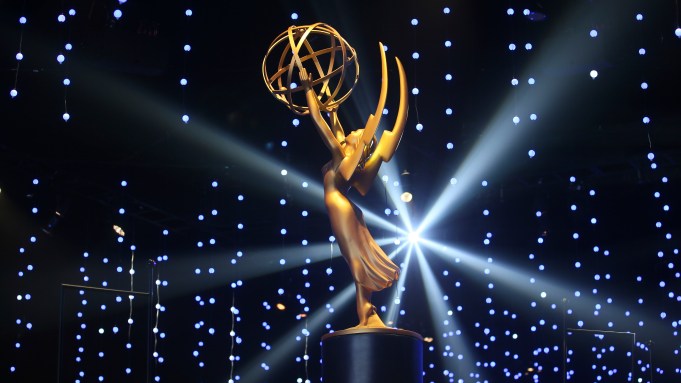 Baby Yoda aka The Child is not just a pop culture phenomenon, but now also a major awards winner: “The Mandalorian,” which put its brand-new streamer Disney Plus squarely on the Emmys’ map this year with 15 overall nominations, picked up its first statues at the Creative Arts ceremony on Wednesday night.

“The Mandalorian” picked up special visual effects, sound editing, sound mixing, production design and cinematography awards during the third of five nights designed to hand out the 72nd Annual artisans’ awards (also the first night in which scripted categories made an appearance). These five awards see the “Star Wars” universe-set drama leading the pack for the most awards from voters for the year.

HBO’s “Watchmen” and VH1’s “RuPaul’s Drag Race” have racked up the second-most awards thus far, with four apiece. “Watchmen” scored their statues all on this third night, while “Drag Race’s” wins were announced on Monday, during the reality/nonfiction themed show.

Wednesday’s festivities included everything from cinematography and costumes to both picture and sound editing, and special visual effects across comedy, drama and limited series/TV movies.

Actor, author and comedian Nicole Byer once again hosted (“I’m still wearing the same dress; I sleep in it!” she said when welcoming everyone to the show) and presenters included Rose Byrne, Bobby Cannavale, Laverne Cox, Giancarlo Esposito, Jeffrey Dean Morgan and Hilarie Burton Morgan, and Monica Raymund. In between handing out the awards, the Television Academy reused bits from the previous ceremonies this year, including Kareem Abdul-Jabbar introducing a piece on the importance of inclusive representation, as well as Byer handing out fake awards to COVID-compliant series including “The Masked Singer” (you know, because of the masks).

This event was one of the four streamed on Emmys.com at 8 p.m. ET / 5 p.m. PT, while the fifth night (and second for scripted categories) will air live on FXX, Saturday at 8 p.m. ET / 5 p.m. PT. Each Academy peer group picked one category to spotlight during the FXX broadcast, which also includes above-the-line awards for guest performers in comedy and drama series.

Click here for the 2020 Creative Arts awards winners from Night 1 and Night 2.

The Creative Arts ceremonies are produced by Bob Bain Prods. and consist of 100 awards being handed out over the five nights. The final night of Emmys events for the year is Sunday, Sept. 20, when the above-the-line Primetime Awards are handed out live at 8 p.m. ET / 5 p.m. PT on ABC. Jimmy Kimmel will host and executive produce that live broadcast from the Staples Center in Downtown Los Angeles, while winners will be at home and on location around the world, ready to deliver acceptance speeches live. In contrast, the Creative Arts’ winners self-taped and pre-recorded acceptance speeches, with the Television Academy promising not to release any videos other than the ones from the winners.

Most of those pre-recorded speeches Wednesday were pretty straight-forward, thanking the Academy, family and colleagues. But the makeup team from “Star Trek: Picard” used their time, in part, to mention that new Academy rules meant 10 important female members were left off the ballot, and they wanted to call out that they “stand with women.”

Here are Wednesday’s nominees and winners:

Outstanding Cinematography for a Limited Series or Movie

Outstanding Cinematography for a Multi-camera Series

*WINNER* “The Ranch”
Episode: “It Ain’t My Fault”
(Netflix)
Donald A. Morgan, ASC, director of photography

“The End Of The F***ing World”
Episode 2
(Netflix)
Benedict Spence, director of photography

“Will & Grace”
Episode: “What A Dump”
(NBC)
Joseph Fulton, editor

Outstanding Single-camera Picture Editing for a Limited Series or Movie

Outstanding Sound Mixing for a Limited Series or Movie

Outstanding Sound Editing for a Comedy Or Drama Series (One Hour)