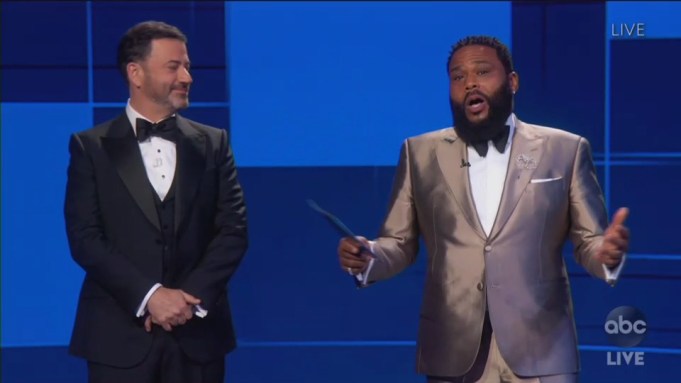 “Black-ish” star and nine-time Emmy nominee Anthony Anderson took the stage at the 72nd Emmy Awards to present the award for outstanding limited series, and took the opportunity to make a statement about Black Lives Matter and representation in Hollywood.

“Before we announce the nominees, I have a few things I’d like to say,” Anderson said to host Jimmy Kimmel.

As Kimmel began to tell him that this was not what they decided in rehearsal, Anderson cut him off:

“We have a record number of Black Emmy nominees this year, which is great. This is the part where the white people start to applaud.”

Kimmel appeased him awkwardly by clapping and nodding, as Anderson continued: “This Emmys would have been the NBA All-Star Weekend and Wakanda all wrapped into one. This was supposed to be the Blackest Emmys ever. Y’all wouldn’t have been able to handle how Black it was gonna be. But because of COVID, we can’t even get in the damn building.”

Anderson went on to say that there would have been speeches quoting Maya Angelou, Langston Hughes and even Cardi B.

“‘WAP,’ Jimmy,” Anderson said, repeating “WAP” several times and causing a gap in the audio in what may have been ABC censoring Anderson. However, he continued to express his point that Black voices deserve to be represented and celebrated at awards shows like the Emmys.

“This isn’t what it should have been, Jimmy. But you know what? I’m still rooting for everybody Black. Because Black stories, Black performances, and Black lives matter. Say it with me, Jimmy,” Anderson said.

After Kimmel repeated “Black lives matter” with Anderson several times, he urged him to “Say it so that Mike Pence can hear it.”

Anderson ended his speech by saying that it was okay that the ceremony was virtual because, “Y’all don’t know how to light us anyway.” He then presented the nominees for outstanding limited series, with the winner being “Watchmen.”