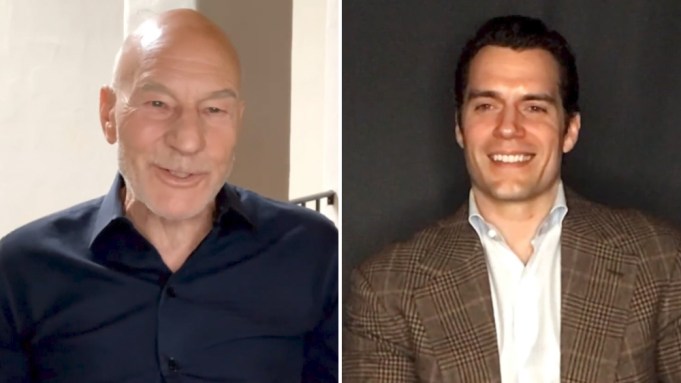 On “The Witcher,” Henry Cavill sheds Superman’s suit in favor of weighty armor and a blond wig to battle monsters as Geralt of Rivia, adapted from Polish author Andrzej Sapkowski’s fantasy books. The call to save humankind is nothing new for Patrick Stewart. In “Star Trek: Picard,” Stewart returns to the captain’s chair of the USS Enterprise; he first played Picard in 1987, when ”Star Trek: The Next Generation” launched. And years before Cavill became Superman on the big screen, he met his own hero — Stewart — on a theater audition that he would never forget. They talked to each other over video chat for Variety‘s Actors on Actors issue.

Henry Cavill: Sir Patrick, how are you?

Patrick Stewart: I did a 90-minute “Fresh Air” interview yesterday, and I talked too much. So that’s why I’m talking like this now, because my voice got very tired.

Cavill: I thought you were just doing an impression of my character from “The Witcher.” You and I met many years ago — I think it was in 2003, when you were casting for “The Lion in Winter.” I’d been acting for three years. I was incredibly nervous to audition in front of an actor of your caliber. I had spent weeks learning my lines, and by the time I got in there, I’d whipped myself into such a frenzy that I completely flubbed the audition. I forgot how to act, and then I left with my tail in between my legs.

As I was walking down a street in London, I suddenly thought, I know I can do better. So I went back in — you said it was OK — and I did another audition. It wasn’t good enough to get the job, but it was far better. You said, “I’m so glad that you came back,” and that gave me such strength throughout my career, and I’ve never forgotten it.

Stewart: Oh, Henry, that’s a delightful story. I’ve had some bad audition experiences in my career — directors who took telephone calls while I was actually doing my audition.

I started sitting in on auditions when we were filming “Star Trek: The Next Generation.” I was shocked by how brusque and offhand my fellow producers and directors were with actors. And I would always make a point of getting up from behind the table, shaking hands with them, asking how they were. Until my fellow producer said to me, “Will you stop doing that? You’re not allowed to make friends with these people!”

Cavill: I have grown up watching you with my father on “The Next Generation.” Can I ask one question, because I’m interested? In Brent Spiner and Data’s eulogy, you said, “Such stuff / As dreams are made on.” Was that your influence?

Stewart: No, I never proposed those Shakespeare references. They always came from the writers’ room, because I didn’t want it to seem that in the middle of this science fiction, I was pushing my own acting history. But we all love doing it. I think we did a scene from “Hamlet.” Data was Hamlet, and I was one of the gravediggers in disguise.

Cavill: With “Picard,” was there anything that you wanted to bring to this character which was going to differ particularly from “The Next Generation”? What were your goals for the evolution of the character?

Stewart: During the seven years that we filmed “Next Generation” and the four feature films that followed it, without intending to, Picard came closer and closer and closer to me, to Patrick. After a while, there was no place that I could identify where Jean-Luc left off and Patrick Stewart began.

What I did want — to the writers, I cited the movie “Logan” that I did with Hugh Jackman, the last of the “X-Men” movies. That movie found the two of us in conditions that were totally unlike anything that we experienced before, and it was thrilling for both of us, because we were continually being challenged. I said to my fellow producers, “I would like the same thing.” The contrast between the Picard that I had been in “Next Generation,” and how the years that have passed had changed him. He was now angry, moody, guilty, sad, lonely, which he had never been before.

Cavill: You almost described my character.

Stewart:  I didn’t recognize you when you first appeared as Geralt. Were they your ideas that he should have this mane of hair hanging in front of his face? And you look massive on the screen, seven foot tall and broad.

Cavill: The wonders of good camerawork. When it came to the character and how he looks, there are descriptions in the books, and there’s a very popular video game series. I wanted to draw on elements of all of those things. It was about an hour-and-a-half to two-hour process every morning before rehearsals. And by the time I was in my full Geralt rig, as I call it, it was like I was looking at a different person, and I felt halfway to the character just through the physicality. I would move slightly differently, and then as soon as the contact lenses went in, everything shifted. And my interactions
were completely different, and the only time they went back to being truly Henry was when I was passed out asleep in a chair in my trailer for 20-minute breaks.

Stewart: You did a lot of your own stunts, didn’t you?

Cavill: I did, yes. For me, when it comes to that kind of thing like stunts, I’ve always enjoyed doing the physical stuff. Working with Tom Cruise [on “Mission: Impossible — Fallout”] really helped — or maybe, in the eyes of the producers, made worse my enjoyment for stunts. I really want to do them now, and I think it’s an essential piece to the character. If an audience is watching Geralt on-screen, they must believe that it is me. If it’s not me, I feel like I’ve betrayed the character in some way, and so I try and do as much as a production will let me.

Stewart: I used to love doing stage fights, and then one day I didn’t. I worked with an actor in a production of “Coriolanus.” I was playing Tullus Aufidius. There is a tradition in stage productions: When there are fights, you always put a substitute sword down. And the rule is, the sword breaks, you step apart. And the actor whose sword was broken would go to the nearest side of the stage, pick up the sword, come back and we will begin again.

This particular night, this actor, his sword broke, he looked at the hilt in his hand and then he threw it at me. I ducked and it hit a member of the audience, and there was this howl — I mean the person was actually hurt. It was no fun. From that moment on, stage fighting became less and less attractive to me, because I was always afraid I would one day not duck fast enough, and I would get impaled.

If we’re lucky as actors, a role comes along, or an offer comes along, that has an enormous impact on what follows. Did that happen for you with Superman?

Cavill: I believe it did. And it’s something I’ve always been incredibly grateful for. I’ve always been a fan of Superman. With a character like that, you carry the mantle with you off set. And it becomes part of your public representation. When you meet children, children don’t necessarily see me as Henry Cavill, but they might see Superman, and there’s a responsibility which comes with that. Because it’s such a wonderful character, it’s actually a responsibility I’m happy to have, and I hope that I get to play more of Superman in years to come.

My life has changed dramatically because of it. And it has given me plenty of opportunity for roles, and yeah, it’s been one of those characters which changed the entire course of my career. I’m incredibly grateful for it, and it’s also taught me a lot about myself.

Stewart: In what way, Henry?

Cavill: He’s so good, he’s so kind, and when you start to compare yourself to him, because you’re playing him, you start to really look inwards. You say, “Am I a good person? Can I be a good enough person to play Superman?”

And if you ever hear a whisper in there which is like, “Hmm, hold on a second. Maybe not,” then you adjust it, and you make sure you are a better person. I think that’s all we can do in life.

Stewart: There was a touch of that with both Jean-Luc Picard and Charles Xavier. I felt with both of them that they do have an impact, like you have described, on my private life. In that there was a sort of standard of morality and behavior that you needed to uphold because if you didn’t they would reflect badly, negatively, on the character that you were playing.

I, over the years, have had so many extraordinary stories told to me by people who watch “Next Generation,” and you’ve now joined the list of them too. Do you think you might, at some point, do more theater work?

Cavill: I was in the school plays from the age of 10. I love that feeling of walking out onstage, that sense of that mild panic which is replaced by elation when it all begins. For now, I’d like to remain in TV and film. In the future, perhaps, when I’m ready to embarrass myself, I might try going back to the stage.

Stewart: I suddenly had the image of me walking into a room to audition for you.