Natasha Lyonne and Maya Rudolph on Teaming Up for Animal Pictures and Helen Mirren’s Cameo in ‘Sarah Cooper: Everything’s Fine’ 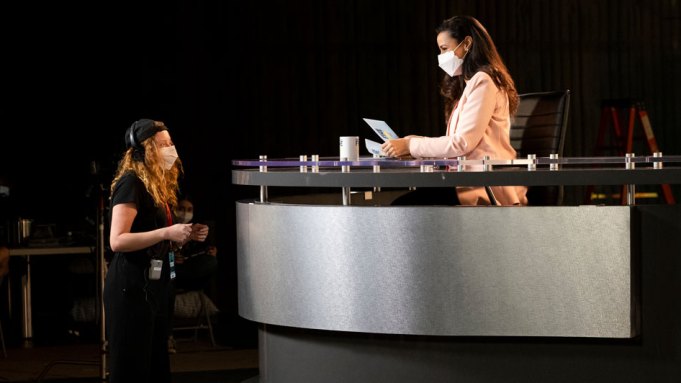 SPOILER ALERT: Do not read if you have not yet watched “Sarah Cooper: Everything’s Fine,” now streaming on Netflix.

When faced with an impossible challenge, some assemble a team of superheroes to get it done. But when Natasha Lyonne and Maya Rudolph took on the challenge of producing the Netflix special “Sarah Cooper: Everything’s Fine,” they assembled the Avengers, plus a queen — Dame Helen Mirren.

“It seems that Helen Mirren might have the greatest sense of humor in all of showbiz. I’m guessing something about being a legend of that size puts everything in the correct perspective,” Lyonne tells Variety of landing Mirren for a cameo in the comedy film.

Though it’s not quite clear how many of Cooper’s viral Trump lip-synching TikTok videos Mirren saw before joining the project, it seems that the Oscar winner was a bit of a “super fan,” saying yes to the role right away because she was excited to work with Cooper, Lyonne recalls.

“She seemed incredibly game and willing and excited to be supportive of a project filled with so many power-tops,” Lyonne continues. “On the home front, Helen is a beloved figure since she does the opening to ‘Documentary Now,’ so there was a sense that she would be game. And what was truly psychedelic and deeply humbling was to suddenly find myself as a director on a Zoom call with Sarah and Helen and Jonathan Van Ness to work through the material and I quickly realized Sarah should take over as there is no easy way to direct people how to lip synch.”

Mirren’s is just one of an impressive number of cameos the team was able to pull off, with a lineup that includes Aubrey Plaza, Ben Stiller, Connie Chung, Whoopi Goldberg, Winona Ryder, Jon Hamm, Fred Armisen and Marisa Tomei. But directing a legend like Mirren was just the tip of the iceberg of the challenges that Lyonne, Rudolph (who also stars in the special) and the Animal Pictures team had to overcome, the most daunting being the time restraint to complete the project. The Netflix special was announced in August, and with plans to air ahead of the November election, the crew had to put the pedal to the metal on production.

“Often, [me and Maya] were trying to shield Sarah from how implausible it was that we’d be able to pull it off,” Lyonne says. “It was two months from when we met her on Zoom to being on set. The shoot was five to six days. We shot 10 pages a day and editing was about a week and a half. We wouldn’t have pulled it off without the greatest editor, Micah Gardner (‘Portlandia,’ ‘Documentary Now’). We finished about a week ago.”

The shoot was grueling due to the time constraints and made even more challenging with COVID-19 protocols requiring 15-minute mask breaks every two hours. Mirren’s scene had to be shot in 10-minute increments, due to the cramped quarters on set, and while filming the production’s one exterior shoot, the air quality became so hazardous from climate fires that the crew had to take indoor breaks instead.

“This particular project is an unbelievable feat that, from beginning to end, Natasha completely pulled off,” Rudolph adds. “We love Sarah and we wanted to do this special, we felt like it’s so important and so exciting. And sometimes when you don’t have a lot of time, you need a leader that says ‘We can do this, I’ll do it.’”

And looking ahead at Animal Pictures’ upcoming slate, she adds: “Natasha needs to continue to direct, that’s no question. There’s no doubt in my mind about that. Knowing that you have a full-service director in-house is pretty bitchin’, I gotta say.”

Lyonne and Rudolph were friends for two decades before deciding to form the production company in 2018, focused on “finding ways to raise up new voices who [they] know are brilliant and resonate with the moment.” And their secret sauce is clearly evident, even over Zoom — their chemistry is electric, not to mention their comedic timing. As business partners, Rudolph sees Lyonne as a Studio 54 entrepreneur Steve Rubell-type (“working hard and shaking hands and kissing babies”), while she views herself as the silent partner behind the scenes, “the Rick Rubin of the operation.” Lyonne, also using entertainment as a metaphor, says Rudolph is “’Easy Rider’ and I’m the ‘Raging Bull.’”

“It was very much a lark since Maya and I have known each other so long,” Lyonne says of the company’s beginnings. “The discovery has been like, ‘Holy s—, I’m so glad that we did it.’ Selfishly, Maya and I got to spend all this time together during the apocalypse, Zooming, drinking coffee, glasses on and reading scripts.”

Welcome to #AnimalPictures! Animal is a production company founded by @princesstagramslam & @nlyonne. We look forward to sharing our journey with you and helping to bring great stories to life! Join us! (This is not a cult.)

In the two years since they teamed up for their “artistic walkabout” — with company president Danielle Renfrew Behrens at the helm — Rudolph and Lyonne have learned a lot about the business and what their considerable capital as entertainers can create. “Everything’s Fine” is just one of the many projects on the docket for the Animal Pictures team — including Cirocco Dunlap’s animated comedy “The Hospital” and “Desert People,” a show based on Alia Shawkat’s life and centered on a family of Iraqi immigrants who run a gentleman’s club in Palm Springs. Shawkat will write, executive produce and star as the family’s L.A.-based adult daughter, who is coming to terms with her sexuality and identity as a first-generation American.

And, as the industry is going through a major evolution amid the pandemic, a renewed push for more representation and the boom (and bust) of new media and streaming platforms, the Animal Pictures team is making the changing tides work for them.

“What I think this project proves was what we’re capable of as a company and also brought forward our natural inclination to nurture and to get something done,” Rudolph says. “I think Sarah’s such a perfect example of what we set out for this company to be — taking somebody who we saw as so incredible, and helping to elevate and make sure that she’s seen in the right way.”

“I’ve always hoped for a day when you change the channel and there’s a Sarah Cooper. And that day came in weirdest, darkest time. But it’s also really apropos of what we’re experiencing. It’s about people taking matters into their own hands,” Rudolph says. “I don’t think she had any idea what this was going to grow into. But it speaks to my firm belief that when things are created for the right reasons — or they come from a place of pure joy, or need, or necessity — people really respond to that. And it’s so exciting to see a Sarah Cooper just appear as though she’s always been there. That, to me, is just a little glimmer of hope.”

For her part, Rudolph has been busy regularly appearing on “Saturday Night Live” as vice presidential nominee Kamala Harris. Last month, the actor picked up her long-awaited first (and second) Emmy awards for her performance as Harris on “SNL” and for voicing “Big Mouth’s” Connie the Hormone Monstress.

Though Rudolph felt like the wins were somewhat of a “surprise,” she was alone in that sentiment. “’It’s about time’ was the message that I got from a lot of people and that I think really stuck with me,” she recalls. “For people to acknowledge that was the best possible message to get from it. When the hardware comes, maybe then it’ll actually set in because I don’t have my babies yet. But it was a surprise. I spent a lot of time working really hard and going to these events, but I’m not an award winner. I’ve never been on that side and it’s fun to win stuff.”

As election day nears, she’s relishing the opportunity to continue playing Harris on “Saturday Night Live.” “Being part of the political time on that show is something really special that I certainly never experienced before. And it’s magical, because the world is watching. Or at least, this country.”

But that doesn’t make preparing for each week’s breaking political news any easier. “It’s a never-ending plethora of ideas of material, which is overwhelming and certainly can’t be produced within one week,” she admits. “The sets can’t even be built in time with the way that things are happening in real time.”

Conversely, though ‘Everything’s Fine’ parodies the current political climate, there was less pressure to speak to every breaking news moment. In fact, Lyonne points out that Trump’s name is never mentioned because the special isn’t about him (per Cooper’s suggestion). Instead, it’s a wider take on all that’s happened — and is still happening — this year. According to Lyonne, the key to the political puzzle was focusing the project on “the soul of the thing, the ‘Big Brother’ aspect” of doom-scrolling through 2020.

But the final question remains — how does one pull off a reenactment of the Access Hollywood tapes with Mirren as Billy Bush and Cooper lip-synching Trump?

“It was really important to us that Helen playing Billy was not just a punchline, but that it actually played to the insanity of the tape existing in the first place,” Lyonne explains. “Because it’s one of the heaviest tapes on record, the goal was to have someone with deep inherent gravitas to bring the complexity and shock of the experience to the front, while doing the lip synch. Which is why we went with someone of Helen’s stature, so that it would resonate as being so many parts — heavy horror film or drama, as much as it’s deeply funny to look at. It’s worth noting that the comedy comes from the fact that we live in a universe that this is somehow a part of the public consciousness which we’ve just accepted as reasonable in any way.”

And what was the backup plan if she’d said no? “There is no back up for the Mirren,” Lyonne says. “There’s only one.”