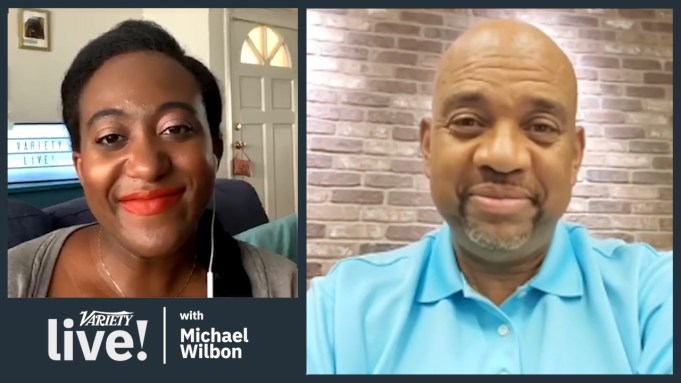 While audiences watching ESPN’s hit documentary series “The Last Dance” — about Michael Jordan and the 1997-98 Chicago Bulls — are learning something new about the basketball legend with each passing episode, ESPN’s Michael Wilbon already had a front-row seat to it all.

But that doesn’t mean that the experience of watching the series isn’t something special.

“It’s got additive value, because even if you thought you knew everything, you didn’t know his take. And the importance to me, the value of this [documentary] to me, number one, is Michael’s take,” Wilbon tells Variety. “I got everybody else’s — I know what all my colleagues think, I know what his coaches think, what his teammates think, what his opponents think. I want to hear from him on all these huge moments of his career and his life.”

“There are two generations of people now who didn’t consume Michael Jordan every day live like I did — like people born in the 1930s-‘70s consumed him, as the primary entertainer in America. I hope that’s coming through as well…and it’s interesting to see what they think,” Wilbon adds.

Joining “Variety Live!” after the docuseries’ seventh and eighth episodes aired on Sunday night, Wilbon reflected on the show’s revelations about Michael Jordan and how they match up to the man he knows personally and professionally.

“In Episode 7, particularly the end of it, where Michael talks — people might consider [his remarks] somewhere between candid and ruthless, depending on their point of view — about why he was who he was as a player, why he was so difficult sometimes to teammates, why he felt that they couldn’t withstand the pressure of him in practice every day, they wouldn’t be ready for the rigors of the NBA playoffs,” Wilbon says, speaking of the revelations about Jordan’s ultra-competitive nature. “That’s the Michael Jordan I got to know covering him for The Washington Post for decades.”

Sharing that Jordan has been understandably trepidatious about telling his story and being so candid about just how competitive he was, Wilbon thinks the basketball legend would be pleased to hear how many have received the series so far.

“That’s what he wants to know. I mean, I know [that because] we talked about this a week ago, where he was saying, ‘What does your son [Matthew] think?’ He knows I have a 12-year-old basketball-playing lunatic son,” Wilbon says, adding that he believes Jordan is particularly interested in the reaction from audiences between about 12 and 40 years old.

“I know Michael was very concerned about subsequent generations, two generations worth of kids and even players who don’t understand and who might think, ‘My god, this is just a mean old man,’” he continues. “And I know part of his reason for doing this [documentary] is to say, ‘Wait a minute, there was a method to this. And here’s what it resulted in. And here’s why I stayed with it.’”

After covering Jordan’s career, while working for 30 years at The Washington Post and then on ESPN, the award-winning sports journalist and longtime host of “Pardon the Interruption” is in a unique position to speak about the basketball legend. And when asked to participate in the 10-part documentary, Wilbon couldn’t say no, so he sat down for two hours of interviews with director Jason Hehir to share his memories. “Some of these stories, like the Dennis Rodman story in Vegas, I’ve known that story for years. I couldn’t wait to hear it.”

But other moments were a little more difficult to relive, like rehashing the backlash and conspiracy theories that followed James Jordan’s tragic murder in 1993.

“It’s still awkward and awful to relive the people, like, trying to connect the dots too closely between his father’s murder and what they thought of it to his personal life. And that was beyond unfortunate; that was out of bounds,” Wilbon recalls. “But even in the exploration of that, what the documentary did, it gave you a great sense, a greater sense then I think any of us knew publicly before about Michael and his relationship with his parents.”

On the other hand, of hearing the unearthed audio of Jordan sobbing in the locker room after winning the 1996 NBA Championship on Father’s Day, Wilbon says, “To hear the wailing — Wow! And you know there was so much pent up in that, including his father’s murder, just having to be without his dad. And so often in African American communities, too often, we don’t see the relationships between sons and fathers captured and we saw that with Michael.”

After Episode 5 of “The Last Dance” explored Michael Jordan’s relationship to social justice as a black athlete, the questions about whether Jordan bears the responsibility to be an activist still come up. For example, many black athletes, including LeBron James, publicly shared their devastation at the murder of Ahmaud Arbery last week, while Jordan was publicly silent.

“They’re different people and they’re produced by different times. I didn’t say anything about Arbery either. I comment on things for a living, and I’ve commented, whether it’s in my house or I might have said something on the radio, [but] all of us from a different generation, from that generation, we don’t live our lives publicly. Every single moment doesn’t have to be on Twitter or Instagram or Tiktok … So now we get this thing that ‘You’re not interested in social justice if you don’t weigh in on this thing at this moment.’ No,” Wilbon explains, noting the work Jordan has done behind the scenes for causes he holds dear to him, like donating millions to the health care community in North Carolina or for education in Akron, Ohio.

“I’m going to speak for Michael a little bit because I know how he feels about [how] that ain’t for us,” he continues. “Doesn’t mean we’re not supportive of the people who feel it’s for them. God bless them. Doesn’t have to be for everybody and it does not measure your commitment.”

As for the final two episodes of the documentary, Wilbon will be watching along with the audience (and his son) and relishing the experience, glad to see Jordan open up. “There’s so many great stories. Michael Jordan is a great storyteller.”