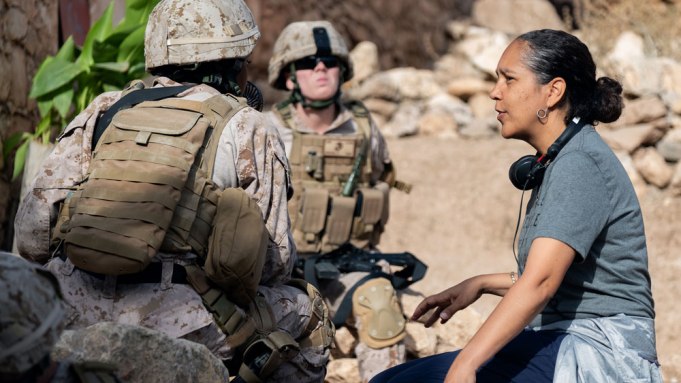 Shooting a love scene is not so different than filming an action sequence.

Just ask director Gina Prince-Bythewood, who makes her action debut with Netflix’s “The Old Guard.” Until now, she’s been known for romantic dramas like “Love and Basketball” and “Beyond the Lights.”

“Have a beginning, middle and end. Make sure it’s character-driven. Make sure it’s emotional. Bring that same thing to the action scenes,” Prince-Bythewood said Tuesday during a 92nd Street Y conversation with “Old Guard” star KiKi Layne and fellow filmmaker Barry Jenkins. “Starting with that gave me the language to talk to my stunt team.”

“The Old Guard,” based on the graphic novel of the same name, stars Charlize Theron as Andy, the 6,700-year-old leader of a small group of fellow immortal mercenaries. Layne co-stars as Nile, a Marine who discovers she’s also immortal.

Prince-Bythewood enjoyed directing and watching a veteran action star like Theron work opposite newcomer Layne. “I love the mixture of new blood and people that are vets in the game. Bringing them together was dope to build that trust between them,” she said. “And the dynamic between someone who’s done it before and KiKi being able to see that as that’s what it takes to get to the level Charlize’s gotten to.”

The director worked closely with her fight choreographer Daniel Hernandez to highlight the characters’ different fight techniques when they get into a brawl inside a cargo plane in the film. “Nile learned to fight through the Marines, in this specific fighting style [from] the martial arts program that they teach, whereas Andy knows every fighting style in the world,” she said. “So to see these two clash, those two fighting styles, [builds] up that frustration of Nile, who can’t even touch this chick.”

While Layne is a breakout star in the film, she isn’t sure about her next steps. “I’m still starting, so there’s so many different genres and film sizes I haven’t even explored yet. So I’m just committed to whether the story speaks to me or the feeling is special,” she said. “Size, budget, whatever — that’s not what I’m honing in on.”

More from “The Old Guard”