Continue to Variety SKIP AD
You will be redirected back to your article in seconds
Jul 22, 2020 11:47am PT 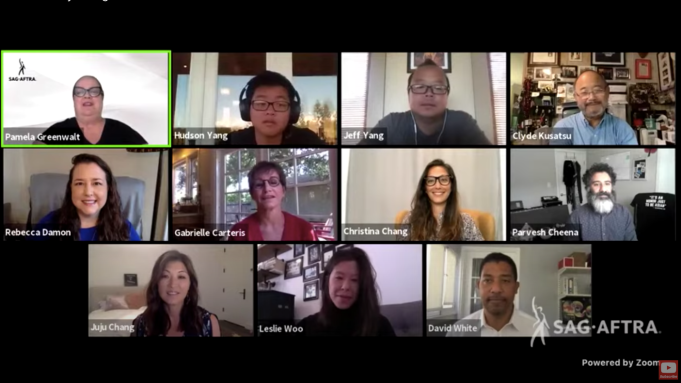 Experts from across the industry explored the intersection of race, storytelling and inclusion in the entertainment biz on Tuesday as part of SAG-AFTRA’s “Race & Storytelling: Asian American Voices” panel discussion.

SAG-AFTRA president Gabrielle Carteris kicked off the event, moderated by CNN Opinion contributor Jeff Yang, by addressing the importance of having a panel on Asian American representation in the entertainment industry. She emphasized that this “ongoing conversation has never been more timely.”

“Our goal in bringing in these thought-provoking panels is to foster open and honest dialogue that will hopefully open minds and create meaningful, lasting change,” she said. “Because change is the only way for us to move forward.”

Carteris also shared SAG-AFTRA’s new public service announcement featuring its members calling on “all Americans to stand against the stigmas, xenophobia and harassment” of Asian Americans following the coronavirus pandemic.

Kusatsu, who makes an appearance in the PSA, was one of the first union members to raise concerns over the anti-Asian racism in response to COVID-19. He brought up the idea of a PSA to the SAG-AFTRA board and worked closely with the Asian American Performers Action Coalition to recruit “as many faces people were familiar with” to send one coherent message.

“We are finally at a point [where] we can have this conversation with the rest of the country — to provide what our stories are like and how we are part of the American scene,” he said. “Because many times, Asians and Asian Americans are considered the other. And it’s not like the rainbow is monochromatic. There’s a lot of pigments in the rainbow. But as Asians, we tend to be quiet, humble and whatever. Now, that’s not the American way. We are here to express ourselves and tell our histories.”

With different professions across the industry, panelists opened up about their own contribution to improving Asian American and BIPOC representation on screen. For Yang, this meant understanding the impact of his role in ABC’s “Fresh Off the Boat.” He was only nine years old when he starred in the primetime series centering around an Asian American family.

“When I first got into acting, I never expected to be a part of anything, let alone the first Asian American family in 20 years on TV,” he said. “I didn’t really know what to do with myself. I didn’t know the power I held or what voice I had, so I tried to use my voice, my platform for other people’s voices.”

Chang, meanwhile, is mindful of “casting” experts of color in her reporting.

“[Journalists] look for experts of color as well as going to the usual suspects — the white, male talking heads you so often see,” she said. “I also think casting characters we see as people of color, as three-dimensional people of color whose stories we tell is an important part of it.”

But Chang doesn’t only want more representation in TV shows and films, but from those in power as well.

“Right now, what we are looking at is the reexamination of the power structure in our country,” she said. “In every media institution, we are looking at who holds the power, who’s in the room to greenlight projects, who’s in the room to say ‘yes’ to stories we’re gonna tell, which stories we are gonna tell, from which perspectives are we gonna tell those stories. And I think that’s true for the non-fiction side of storytelling as well as the entertainment side.”

Woo echoed Juju’s sentiment and acknowledged her privilege as a casting director. She said she has recently been fortunate enough to cast more BIPOC actors for three-dimensional roles.

“I think that the more stories there are that focus on individual journeys are the key to bringing about these stories on screen,” Woo said. “I think a lot of that comes down from the top. I’ve worked with four female Asian directors in the last year and a half. That is because there is now an openness to hearing these stories, to hearing different perspectives.”

The conversation ended on a note about allyship. Chang said she has been drawn to BIPOC narratives because she understands what it means to be othered. Chang urged everyone in the industry to simply treat these stories as human experiences.

“We are at a time where we are examining privilege, and we as allies can continue to tell the stories of those who are marginalized,” she said. “There’s a lot of history to be told, a lot of our perspectives to be brought forward that can link arms with other communities. That progress is really about inclusion. Not about seeing one particular person of color onscreen.”