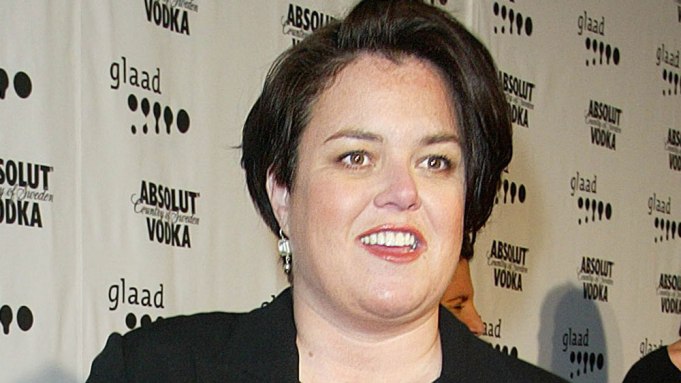 The GLAAD Media Awards were supposed to happen Thursday night in New York City, but the LGBTQ media watchdog group canceled the 31st annual festivities in the wake of the coronavirus pandemic.

However, GLAAD doesn’t want the day to go unnoticed, so the organization has released exclusive video to Variety of Elton John accepting the Vito Russo Award at the Media Awards in 2000 as well as footage of Rosie O’Donnell being honored with the same award three years later.

The Vito Russo Award is given to a media professional who has significantly helped LGBTQ acceptance. Ryan Murphy was to receive this year’s honor at the New York gala with Matt Bomer and Sarah Paulson presenting the award.

During her 2003 speech, O’Donnell recalled how her celebrity friends, including Ellen DeGeneres, Nathan Lane and the since-disgraced Harvey Weinstein, urged her to come out before she finally did during a stand-up act that was part of a breast cancer fundraiser in February 2002. “I’m sorry I wasn’t here sooner,” O’Donnell said. “Seriously, you get there when you get there.”

But she also cracked, “Is there one person in this room who didn’t know I was a big dyke before that day?”

John mentioned how he had a photo of Matthew Shepard hanging in his kitchen “to remind him of the things you still have to do.”

Shepard’s murder in 1998 became international news and inspired a wave of activism calling for hate crimes legislation because his killers targeted the 21-year-old college student because he was gay. They beat, tortured and left Shepard to die near Laramie, Wyo.

“My one wish before I moved onto the next rounds, as it were, would be elimination of hatred,” John said.

About 800 people were expected to attend this year’s gala at the New York Hilton Midtown, where Judith Light was also being honored with the Excellence in Media Award. Late-night talk show host Lilly Singh was supposed to host the ceremony, which was going to include performances by Adam Lambert and Ben Platt.

GLAAD announced earlier this week that its Media Awards gala in Los Angeles on April 16 was also being canceled, but group was still trying to reschedule them for the fall. Taylor Swift was set to receive the Vanguard Award during the 1,000-person gala at the Beverly Hilton hotel. Janet Mock was also being honored as were LGBTQ journalists Karen Ocamb and Mark Segal and Netflix’s “Special.”

The Media Awards include more than 175 nominees in 30 categories. A GLAAD rep confirms that winners will be announced, but details of how and when are still being decided.

GLAAD president and CEO Sarah Kate Ellis told Variety earlier this week that many of the awards’ corporate sponsors — including pharmaceutical giant Gilead Sciences, Hyundai, Bud Light and Ketel One — as well as individual donors have agreed not to pull their financial commitments. Even so, GLAAD expects to lose $2 million dollars because of the cancellations.

Barbra Streisand tweeted her support of GLAAD on Thursday morning with a call to donate to the organization. “My heart goes out to all threatened by this terrible pandemic,” she wrote. “It’s also important to be mindful that great causes are threatened including the urgent work of the LGBTQ media advocacy organization GLAAD. You can help by going to http://GLAAD.org/donate.&#8221;

Other big not-for-profit fundraisers that have been canceled or postponed because of coronavirus include The Elizabeth Taylor Ball to End AIDS; the Human Rights Campaign dinners in Nashville, Los Angeles and Houston; ACLU’s Centennial Gala and Fight for Our Rights After Party; the Met Gala; and the UNICEF Ball.