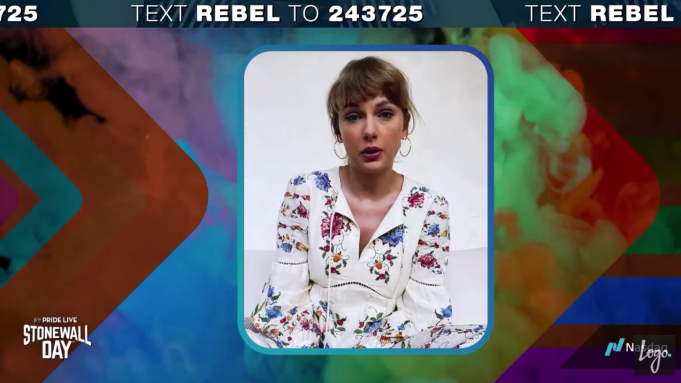 When former Vice Pres. Joe Biden declared that he supported same-sex marriage during a “Meet the Press” interview in 2012, he represented the highest-ranking politician to ever endorse the right for gay Americans to marry. His unplanned admission was a pivotal evolution in the now 77 year-old presidential candidate’s stance on gay rights and — significantly — a blindsiding event for Pres. Barack Obama and his White House, who’d not yet taken the same position. In a televised interview three days later, President Obama became the first sitting president to support gay marriage.

Biden made a surprise appearance at the event alongside his wife, Dr. Jill Biden. “Pride is particularly poignant this year,” he said. “Even as LGBTQ rights continues to be attacked, the Supreme Court has affirmed protections for LGBTQ+ people against employment discrimination. Even as the lives of trans individuals — especially Black trans women — are under threat, we’re reminded that Marsha P. Johnson and Silvia Rivera helped bring life to the movement.”

In a Pride month dominated by a viral pandemic that has crippled the American economy and an electrifying social justice movement seeking to address systemic racism and police brutality, “we are reminded of those courageous individuals who first marched decades ago,” Biden said, adding, “It has renewed our hope.”

Celebrating the fifth anniversary of marriage equality, Obama advised viewers that “the struggle and triumph for LGBTQ rights shows how protest and politics go hand in hand, how we’ve got to both shine a light on injustice and translate those aspirations into specific laws and institutional practices.” Whether protecting against healthcare discrimination, combating violence against trans women of color, or supporting causes of racial justice, “I hope you know that your voice can make an enormous difference,” he said. “I hope you all understand what Edie Windsor, Harvey Milk and Bayard Rustin all knew, that progress doesn’t happen on its own. It happens because we stand up, speak out and demand change.”

In the greatest show of progress, both Biden and Obama — as well as many of the event’s attendees — specifically spoke to transgender Americans and LGBTQ people color, drawing upon the momentum of national #BlackLivesMatter protests and recent blows from the Trump administration, who unsuccessfully petitioned the Supreme Court not to extend employment and civil rights protections to LGBTQ people and rescinded Obama-era healthcare protections for transgender Americans.

“We still have so far to go in terms of equality and protections for LGBTQ people and people in the trans community,” said Taylor Swift. “I got my census the other day, and there were two choices for male and female, and that erasure of transgender and non binary people was so upsetting to me. When you don’t collect information on a group of people, that means that you have every excuse in the world not to support them.”

A linking of arms between the LGBTQ and BIPOC communities and a recognition that Stonewall, too, was a rebellion against police brutality defined this year’s commemoration, which featured guests like Ellen DeGeneres, George Takei, Demi Lovato, Katy Perry, and Chelsea Clinton, as well as performances by Shea Diamond, Kesha, Hayley Kiyoko and Cynthia Erivo.

“Pride is a public affirmation of queer and trans expression and an opportunity for our community to come together and validate one another,” said writer and performer Alok Vaid-Menon. “As we commemorate Stonewall Day, it’s important to remember that this fight started with trans women and gender nonconforming people of color who physically resisted hate.”

Actress and transgender activist Blossom C. Brown assessed the celebration’s tenor, saying, “My heart is heavy. I see the pain inside our community, and I know what it’s like to feel unsafe. We’ve lost so many trans women of color to police brutality, and we can not accept that.”

She continued, “So, I give my respect now to our partners in protest in every community, and for those who just don’t get it, let me remind you: You can’t love our culture, and not love our people.”

Actor and activist George Takei reminded viewers of the connection police brutality has to Stonewall.

“We cannot celebrate Pride today but remain silent tomorrow,” Takei said. “Stonewall was a protest that turned into rebellion because of persistent police brutality against our community. That’s why we must stand in solidarity with our Black brothers and sisters and the whole spectrum in between.”

Before performing a cover of “Mr. Brightside” by The Killers and her song “Girls Like Girls,” Hayley Kiyoko encouraged her generation to continue to fight for the LGBTQIA+ community.

“We can see the energy and rebellion of 1969 still alive to this day and it has to be, because it is our job for our generation to continue the fight and to finally get true, lasting safety and equality for our community,” Kiyoko said.