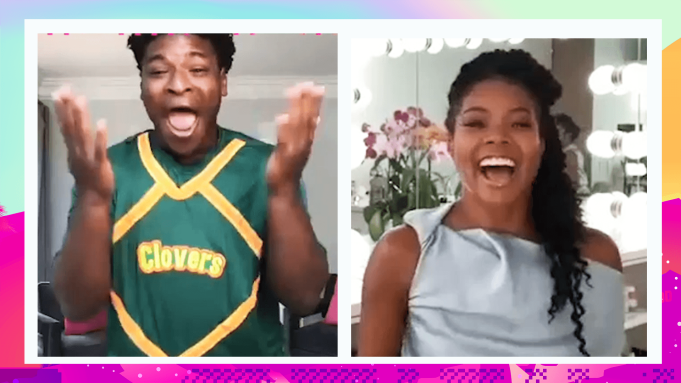 “She’s the perfect blend of intelligence, class and strength,” Harris told Variety during the “Power of Young Hollywood” presentation streamed on Facebook. Variety wanted to pay back the positivity Harris has spent most of his life cheering into the world, so we Zoom-surprised him with the Clover captain herself. Mid “Bring it On” cheer, Union appeared to bestow Harris with praise.

“You are the most wonderful person I’ve seen through my television in so long,” said Union. “You spoke to me, your positivity, your journey. I cried every time you appeared. I’m obsessed.” And then things got professional, “We’re going to have to work together,” she said, to the delight of Harris who replied with an ecstatic, “Absolutely!” “Don’t threaten me with a good time,” Union returned.

When Harris asked Union what advice she had for him, she was ready with an all time classic: Be on time.

“Time in this town — people act like it’s a suggestion, and that is the quickest way to put yourself right out the mix,” she said. “So many people’s careers have been impacted, because they do not value other people’s time. Just be you. Don’t be weird, and watch your crowd.”

Fingers crossed this is the first of many Harris and Union collaborations, or perhaps a “Bring it On” revival. We can always hope.

Watch the full Power of Young Hollywood special below: