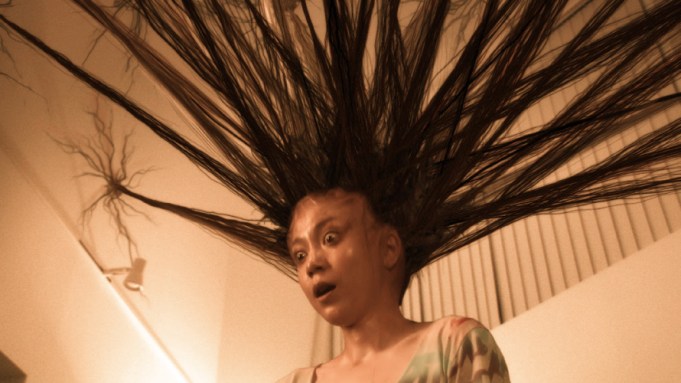 Writer and director Justin Simien said his new horror film, “Bad Hair,” is dedicated to the strength of the Black women in his life.

“‘Bad Hair’ is a very weird love letter to Black women and the unparalleled power they possess to endure and persevere,” Simien said in a pre-recorded intro at the Hulu film’s drive-in premiere on Thursday night at the Rose Bowl in Pasadena. “It’s my satirical horror love letter. Is that a thing? I guess we’re making it a thing.”

The movie tells the story of a Black woman (Elle Lorraine) forced to pay for a weave in order to continue her career in television and be taken seriously by her boss. Things turn for the worse when her new hair takes on a life of its own, a superstition she always dismissed when her father said he believed in it.

Though the film is comedic in nature, actress Lena Waithe said the root of its plot is much deeper than a few laughs. “It’s an important story,” she said. “It’s a story about the adversity Black women face in the workplace.”

Before guests parked to watch the pic, they drove through the haunted Huluween experience featuring characters from Hulu series and films, including “Helstrom.” Photos were taken in front of a “Bad Hair” background via green screen.

In accordance with safety protocols set up to curb the spread of COVID-19, attendees were required to stay in their cars.