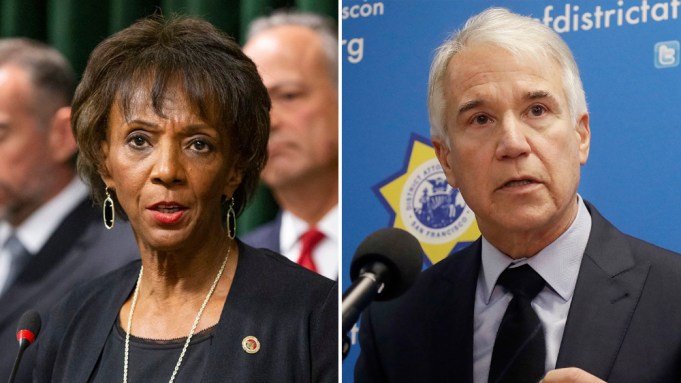 The leading challenger in the race for Los Angeles County district attorney has questioned the timing of rape charges against Harvey Weinstein, saying it “smacks of politics.”

District Attorney Jackie Lacey is running for a third term in the March 3 primary election. On Monday, she held a press conference to announce four charges against the former producer related to two incidents in February 2013. The announcement came more than two years after one of the accusers — an Italian actress — reported her allegations to the LAPD.

George Gascón, the former district attorney of San Francisco, is Lacey’s leading opponent. In an interview with Variety, he said the timing of the charges was “very suspicious.”

“They had no activity for a long time,” he said. “Then all of a sudden, four weeks before absentee ballots come, we’re having a press conference… It raised concerns for me.”

Lacey announced the charges on the opening day of Weinstein’s rape trial in New York. At the press conference, she said that was a coincidence, and said that the charges were filed once they were ready.

The Italian actress — known as Jane Doe 1 — went to the police in October 2017. Investigators presented the case to the D.A.’s office on Feb. 1, 2018. In an interview, her attorney Dave Ring said it had been a “long two years,” and that at times it was not clear whether charges would be filed.

“I got mixed signals,” Ring said. “There would be long stretches where neither one of us really heard from them about what was happening.”

Ring said his client feels it is “fantastic” that Weinstein was charged.

“The investigation involved multiple crime scenes and interviewing victims and witnesses, some of whom lived outside of California, and in some cases, outside of the United States,” the Los Angeles D.A.’s office said in a statement. “Deputy district attorneys had to earn the trust of some victims and witnesses who were extremely reluctant to become involved in a case of this nature. Police reports, witness statements and materials presented by the defense were thoroughly examined before determining that criminal charges would be filed in this case.”

Gascón’s campaign issued a statement on Thursday contending that Lacey’s decision to file the case this week could undermine the prosecution in New York.

“The timing of the charges suggests Jackie Lacey is more concerned with self-preservation than obtaining justice for Harvey Weinstein’s victims,” Gascón said in a statement. “In an effort to score political points she has aided Weinstein’s defense and increased the chances that another alleged powerful sexual predator will escape accountability. This is the height of incompetence, and it’s what happens when prosecutors allow politics to inform how they exercise the authority of the state.”

Weinstein’s defense attorneys argued in New York on Tuesday that the Los Angeles charges would make it even harder to find impartial jurors, and asked for a pause in the trial. That request was denied.

The Manhattan D.A.’s office declined to comment on Gascón’s statement.

Lacey’s campaign spokesman said politics did not factor into the timing of the charges.

“D.A. Lacey’s office makes its prosecutorial decisions based on the evidence, the facts, and the law,” said the spokesman, Maclen Zilber. “The fact that the ex-San Francisco D.A.’s first response to Harvey Weinstein’s prosecution was to worry about how it impacts his own political career shows he’s a politician, not a real prosecutor.”

Gascón, a former assistant chief of the LAPD, entered the race in October. Since then, he has repeatedly criticized Lacey for failing to file charges against Weinstein and other high-profile suspects. In November, he blasted Lacey for not charging Bikram Choudhury, the yoga guru who was accused of sexual assault and was the subject of a Netflix documentary. He also faulted her for failing to act sooner against Ed Buck, a Democratic campaign donor who has been repeatedly accused of drugging and sexually abusing young men; and for not bringing charges against comedian Bill Cosby.

“This D.A. has met a parade of victims with shrugged shoulders,” Gascón said at the time.

He renewed his attack just a week ago, putting out a statement that included Weinstein among a “long list of wealthy and well-connected men” that Lacey had refused to prosecute.

Polling suggested that was Gascón’s strongest line of attack against Lacey. Survey results, obtained by Variety, showed that 67% of respondents had “serious” doubts or “very serious” doubts about voting for Lacey after being told that she had refused to prosecute Cosby, Weinstein and others — significantly more than other attacks on her.

Lacey established a Hollywood sex crimes task force in November 2017, in response to a flood of #MeToo allegations. Since then, prosecutors have reviewed charges involving 40 suspects. The Weinstein case is the first to be charged since the formation of the task force.

“The fact that they are moving forward is a good thing,” Gascón said in the interview. “I wish they would move forward on others as well.”

In particular, he cited Danny Masterson, the “That 70’s Show” actor who has been under investigation for sexual assault for nearly three years.

“The office has a problem that seems to be endemic to that office, when it comes to powerful influential people,” Gascón said.