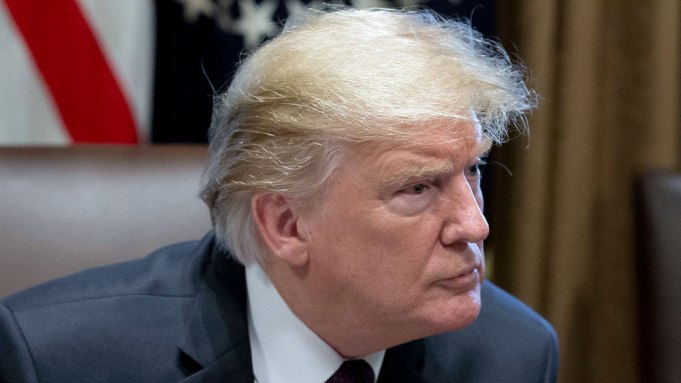 Just hours after President Donald Trump issued an executive order seeking to strip legal protections from social-media companies that “censor” speech, Twitter early Friday applied another a warning label to one of Trump’s tweets — with the company saying his post about unrest in Minneapolis violated its policy banning content that glorifies violence.

Trump, in a tweet at 12:53 a.m. ET Friday, said that “when the looting starts, the shooting starts,” in reference to rioters in Minneapolis who took to the streets in the wake of the death of George Floyd, the man who died Monday while in police custody. Video showed a city police officer kneeling on his neck.

“….These THUGS are dishonoring the memory of George Floyd, and I won’t let that happen,” Trump said in the tweet, which is now hidden on Twitter’s service behind the warning message. “Just spoke to [Minnesota] Governor Tim Walz and told him that the Military is with him all the way. Any difficulty and we will assume control but, when the looting starts, the shooting starts. Thank you!”

A little over two hours later, Twitter said it put a warning label in front of that tweet. According to Twitter, Trump’s tweet “violates our policies regarding the glorification of violence based on the historical context of the last line, its connection to violence, and the risk it could inspire similar actions today.”

The company continued, “We’ve taken action in the interest of preventing others from being inspired to commit violent acts, but have kept the Tweet on Twitter because it is important that the public still be able to see the Tweet given its relevance to ongoing matters of public importance.”

Meanwhile, the president posted the same message on Facebook and Instagram, which so far have left them unchecked.

The “looting and shooting” comment by Trump appeared to be an allusion to the infamous remarks by Miami’s chief of police in 1967 who bragged at a news conference that “We haven’t had any serious problems with civil uprising and looting, because I’ve let the word filter down that when the looting starts, the shooting starts,” as reported by the New York Times.

Twitter’s new warning label on the Trump tweet came after the company on May 26 — for the first time — affixed fact-checking labels to two of his inaccurate tweets about mail-in ballots. Trump, furious about Twitter adding the “potentially misleading” warnings to his posts, retaliated Thursday by issuing an executive order directing federal agencies to reinterpret Section 230 of the Communications Decency Act to remove legal liability immunity for social networks that “engage in censoring or any political conduct.” Legal experts said Trump’s order appears to be unconstitutional and would face a court challenge.

For political figures like Trump, Twitter’s policy is to leave in place tweets that would be violations for regular users but which the company considers to be in the “public interest.” In June 2019, Twitter announced a policy under which tweets by political figures that violate its regular policies would be displayed with a warning notice in front of tweets. The move Friday is the first time Twitter is applying that policy to one of Trump’s tweets.

According to Twitter, “As is standard with this notice, engagements with the Tweet [from Trump about Minneapolis] will be limited. People will be able to Retweet with Comment, but will not be able to Like, Reply or Retweet it.”

When viewed on Twitter platforms, the warning notice hides the text of Trump’s tweet until a user clicks “View” to see it. However, the label does not show up when the tweet is embedded in third-party sites.

After Trump threatened to punish Twitter (in messages posted on the platform), Twitter CEO Jack Dorsey said the company plans to keep fact-checking information in tweets. “We’ll continue to point out incorrect or disputed information about elections globally,” Dorsey wrote in a series of posts Wednesday.