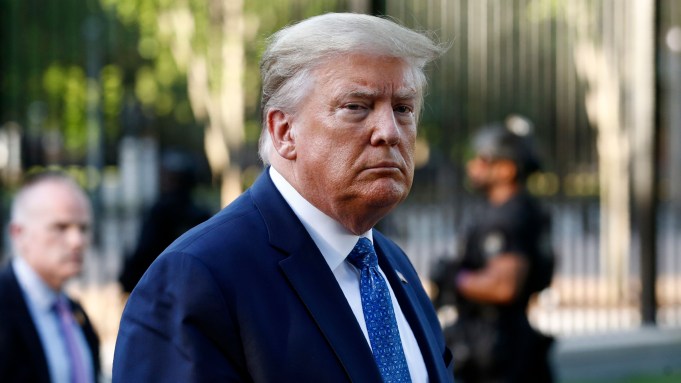 President Donald Trump’s star on the Hollywood Walk of Fame was tagged over the weekend with black spray paint. “BLM,” in support of the Black Lives Matter movement, was also marked just below Trump’s star.

According to multiple social media posts, a bag that appears to contain dog excrement was left on top of the tile.

On Sunday, thousands of people marched down Hollywood Boulevard to call for an end to police brutality. Across the nation, protesters have taken to the street to demand criminal justice reform and decry systematic racism after the deaths of George Floyd, Breonna Taylor and Ahmaud Arbery. Floyd, a 46-year-old Black man, died on May 25 after a Minnesota police officer knelt on Floyd’s neck for almost nine minutes.

Protestors noticed the damage and uploaded pictures to social media.

This is @realDonaldTrump’s star on the Hollywood Walk of Fame. That is a green bag with some dog 💩 pic.twitter.com/SGsv3LtuEu

Another person on the scene captioned photos of the damage as, “How to improve Donald Trump’s star on the #Hollywood Walk of Fame in 3 images.”

Trump’s star has been defaced several times. In 2018, it was completely demolished by a man using a pickaxe. In October 2016, someone destroyed the star with a pickaxe and a sledgehammer after the “Access Hollywood” tape was leaked of then-presidential candidate Trump making lewd remarks about women to host Billy Bush. Earlier that year, L.A. street artist Plastic Jesus constructed a small concrete wall, complete with barbed wire and “Keep Out” signs, around the star, in reference to Trump’s proposal to construct a wall along the U.S.-Mexico border.

The Hollywood Chamber of Commerce did not respond to Variety‘s request for comment.