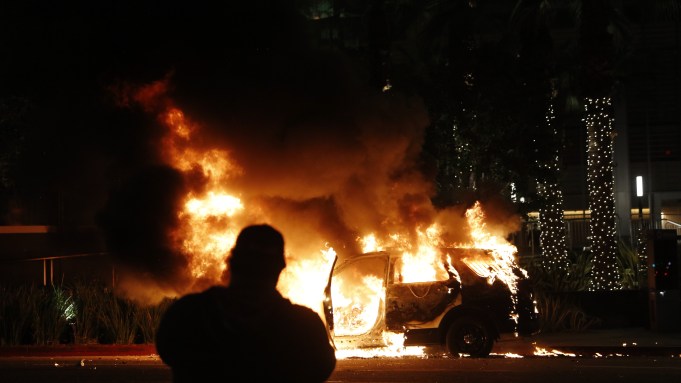 The National Guard is deploying to Los Angeles on Saturday night as the fourth day of protests sparked by the death of George Floyd once again turned violent.

At 10:30 p.m., Gov. Gavin Newsom declared a state of emergency in Los Angeles County, and authorized the National Guard deployment in response to requests from the city and the county.

Several cities throughout the Los Angeles area declared 8 p.m. curfews, including Pasadena, Santa Monica, West Hollywood and Beverly Hills. About 1,000 National Guard troops were expected to be called in to help restore order, as looting took place in the Fairfax area and in downtown L.A.

“This is no longer a protest,” Los Angeles Mayor Eric Garcetti told NBC4. “This is vandalism. This is destruction.”

The California National Guard is being deployed to Los Angeles overnight to support our local response to maintain peace and safety on the streets of our city.

The Los Angeles Fire Department was working to put out fires at several stores in the 7600 block of West Melrose Avenue.

A group of people was seen walking along the famous L.A. shopping street — home to boutiques and specialty stores — breaking storefront windows and causing destruction along the way. Other stores included Altivo, a watch store and a nail salon where a group were seen breaking an ATM on the street. An Adidas flagship store on Melrose was looted.

The National Guard was expected to be on scene starting around midnight.

“What happens tonight really depends on the citizens of L.A., what we can do and what we can allow to happen,” said LAPD Chief Michel Moore.

About half of the LAPD’s force was on the streets on Saturday night, and reinforcements were also called in from surrounding counties.

“Curfew in LA is in place,” the L.A. Sheriff’s Department said in a tweet. “Anarchists go home.”

Earlier in the day, protesters clashed with police at Fairfax Avenue and Beverly Boulevard.

As a demonstration moved toward The Grove, there was looting at the two-floor Nordstrom department store and a Ray Ban sunglasses flagship boutique. As news of an 8pm Los Angeles curfew began to spread via broadcast news and mobile phone alerts, nearby shops like the luxury sneaker consignment store Flight Deck were fully robbed of inventory. Moving further west into the border of Beverly Hills, a CVS Pharmacy superstore on La Cienega Blvd was stormed by masked people breaking safety glass with abandoned electric scooters.

A police department kiosk was set ablaze at The Grove.

As protesters made their way into Beverly Hills along Santa Monica Boulevard on Saturday afternoon, the City of Beverly Hills tweeted that residents should stay home and motorists should avoid the area.

At about 2 p.m., Beverly Hills police closed Rodeo Drive to traffic. At one point a group flooded the famed shopping street and sidewalks and took a knee in silent protest.

Looters broke into Alexander McQueen and were seen running from the store with arms full of merchandise. The front window was tagged with red paint that said, “Make America Pay for its Crimes Against Black Lives.” Blue wood that boarded up the windows and entrance of Gucci was tagged with “Eat the Rich,” and “Can’t Be Silenced.” Similar tags were painted into plywood protecting the windows of Hermes.

ABC7 reporter Carlos Granda was among those hit by tear gas while covering the Beverly Hills protests.

Protests took place in at least 30 cities around the country on Saturday.