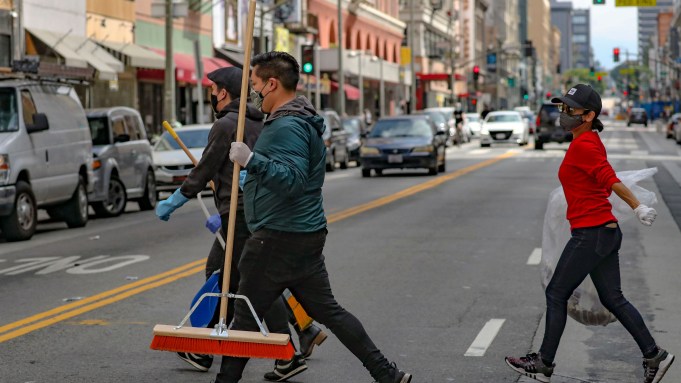 That supersedes Los Angeles Mayor Eric Garcetti’s earlier announcement that the city would continue its 8:00 p.m. curfew on Sunday night.

“When times demand it, strong steps are required to bring peace back to our city, which is why I enacted, as heavy a decision as it was, a city-wide curfew,” Garcetti said. “The goal here is to keep all Angelenos safe. Please help do that, we all have to own that ourselves to help law enforcement and firefighters keep the peace.”

The city of Beverly Hills announced that the business district will have a 1:00 p.m. curfew and a city-wide curfew will start at 4:00 p.m. Santa Monica has also announced a 4:00 p.m. curfew after looting began at several stores, including the Third Street Promenade.

Garcetti also condemned the violent protestors and looters who turned peaceful demonstrations against the death of George Floyd on Saturday into chaos. He blamed a “small group of individual” for inciting violence in several areas.

“As the sun set in our beautiful city last night, we saw some of the ugliest images in a generation, acts on our streets that were not demonstrations for justice — destruction and looting that came from a small group of individuals. They have not just caused chaos and damage, they are hijacking a moment and a movement and changing the conversation,” he said.

Garcetti also added that protestors should feel safe enough to assemble in the streets and exercise their rights, but turning to violence was unacceptable.

“We feel a righteous rage and we have to express it. But the rage must not consume us. It must not be turned back on us. We know that it is only with peace that progress can follow. We must not allow any who feast off of chaos, who hunger for division, who want to replace peaceful protest with images of a nation coming apart, we must not let them win. Let’s be clear, black lives matter and allies from across this city and region organized powerful protests in a beautiful park yesterday. No one should point a finger in the direction of people who were exercising their First Amendment rights,” he said.

Los Angeles Police Department chief Michael Moore discussed the violence that his officers encountered during the Saturday night protests. He said one officer has been hospitalized after his skull was fractured after being hit by a brick.

The prolonged curfew comes after large protests took place in major cities across the U.S., including New York City, Detroit, Minneapolis, Chicago and many more. Curfews were enacted in many cities on Saturday night to reduce looting, property damage and violence.

Los Angeles’ cleanup process began across the city on Sunday after dozens of businesses were left damaged, vandalized and looted. Business owners in West Hollywood, Beverly Hills and Downtown Los Angeles woke up to find broken glass, graffiti and destroyed storefronts after a night of unrest.

Numerous businesses along L.A.’s Melrose Avenue were affected including Osteria Mozza, JapanLA and Nail Spa. The National Guard, who were called in after Governor Newsom declared a state of emergency in L.A., were deployed outside the Grove, a popular retail and dining destination in the heart of the Fairfax district after several of its chain stores were looted.

But in the morning, Melrose and Fairfax was lined with citizens and city workers working together to sweep up the damages. Volunteers with brooms and shovels arrived early in the morning to help cleanup where they could. While no official statement has been released by either Mayor Garcetti or Governor Newsom, the Mayor’s office tweeted, “We’ve deployed City teams early this morning to the Downtown and Fairfax areas to clean up our streets. We are all working together to keep the city we all love clean and safe.”

Meanwhile, others have stepped up their security measures. An armed guard was posted outside the Chevron gas station on La Brea and Beverly 9:30 a.m.

The West Hollywood Sheriff’s department announced earlier that a curfew would go into effect from 8:00 p.m. through 5:30 a.m Monday. “Please plan your activities today accordingly. Peaceful demonstrations are a hallmark of our country. Violence is unwarranted and takes away from the message.”

However, since L.A. County covers the cities of West Hollywood, Santa Monica, Pasadena, and many more, the 6 p.m. county order is in affect over the entire area.