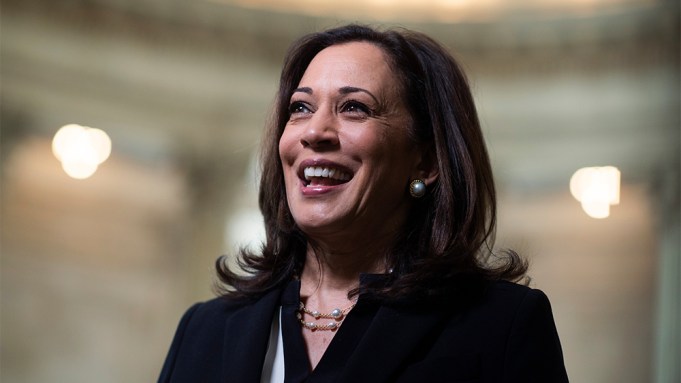 The news that Kamala Harris would join the Democratic presidential ticket hit Hollywood with a jolt on Tuesday, as the entertainment community celebrated the elevation of its home-state senator.

Harris has long-standing connections to the industry, thanks to more than a decade as a rising star in California politics. Her showbiz connections also come close to home. Harris’ husband, Douglas Emhoff, is an entertainment lawyer at DLA Piper in Century City.

Damon Lindelof, showrunner and creator of HBO’s “Watchmen,” has been a strong supporter of Harris, co-hosting a fundraiser for her early in the 2020 presidential campaigning.

“I didn’t realize how excited I would be until the moment I heard Kamala was the pick,” Lindelof told Variety. “I actually pumped my fist and said ‘Yes! Yeeeeeeessss!’ and it’s perfectly OK that I was alone when I did it. My wife Heidi and I have been big supporters since we first met her — we couldn’t imagine a better candidate to make history.”

ICM Partners CEO Chris Silbermann also hosted a fundraiser for Harris during her run for Senate in 2016. He praised Harris as “a great choice.”

“She’s tough,” Silbermann told Variety. “She’s going to be a great campaigner. She’s got the right mix of warmth and charisma and toughness that is so hard to come by. She’s really strong and balances Biden out in a great way.”

Universal film chief, Donna Langley, who has personally been an ardent supporter of Harris beginning with her campaign for California Attorney General, said, “Kamala demonstrates a level of passion, grace and grit, that separated her from the pack. I’ve always believed in her leadership and she is the right VP candidate to face the challenges our country has ahead of us.”

During her own campaign for the presidency last year, Harris was the leading recipient of Hollywood dollars.

“A lot of people have deep relationships” with Harris, said Lara Bergthold, partner at Rally Communications. “They appreciate the craft of politics — the media craft — and are excited about the energy and engagement she’ll bring, and how she’ll bring it to Trump in a real way.”

Presumptive Democratic nominee Joe Biden also has strong ties to the business, and is especially remembered for his early support for gay marriage. But Harris — a veteran of the high-dollar donor circuit — can be expected to take on a special responsibility to raise money in Hollywood in the closing months of the campaign.

A native of Oakland, Calif., Harris brings a wealth of experience from her years as district attorney for San Francisco, followed by her historic election as California’s attorney general. In 2017, she moved into the U.S. Senate seat held for 23 years by Barbara Boxer. Harris is not only the first Black woman and the first woman of Asian American descent to be selected for a major party presidential ticket, she’s also the first native Californian to run on a Democratic presidential ticket.

Harris has had high-wattage industry backing from the start. Among the contributors to her first statewide campaign in 2010 were Jamie Foxx, Tyra Banks, Aaron Sorkin and Steven Spielberg. Chris Rock and Disney Television Studios/ABC Entertainment chief Dana Walden were among the donors to Harris’ first bid for San Francisco district attorney in 2003. Among Harris’ closest friends is Chrisette Hudlin, former entertainment PR executive and the wife of director-producer Reginald Hudlin.

On Tuesday, “The Chi” and “Twenties” creator/executive producer Lena Waithe was among the industry heavyweights who applauded the historic selection of Harris in a statement to Variety.

Adam B. Vary, Cynthia Littleton and Marc Malkin contributed to this story.