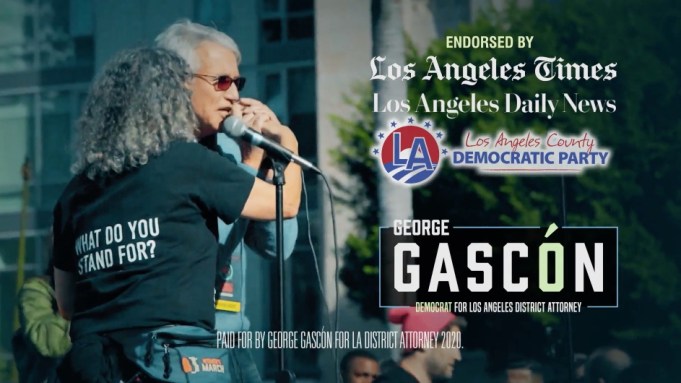 Legend has supported progressive prosecutors across the country, and endorsed Gascón’s campaign during the primary. The new spot features images of Black Lives Matter protests, and attacks Lacey for receiving financial support from police unions.

“The problem is right in front of our eyes,” Legend says in the ad. “Our district attorney has done nothing about police brutality, and the police unions are thanking her by spending millions to keep her in office.”

The ad is set to debut during Tuesday night’s presidential debate coverage on KNBC-TV and KCBS-TV. According to an FCC filing, the Gascón campaign spent $36,000 to air the ad on KNBC-TV.

Law enforcement unions, including the L.A. Police Protective League and the Peace Officers Research Association of California, have raised $3.6 million in support of Lacey’s campaign, according to campaign finance filings. Gascón has refused to take police union contributions.

One of Gascón’s key supporters is Patty Quillin, who’s married to Netflix co-CEO Reed Hastings. She contributed $1 million to a committee supporting Gascón earlier this year.

Legend has supported Chesa Boudin in San Francisco, Kim Foxx in Chicago and Larry Krasner in Philadelphia, all of whom ran in support of criminal justice reform.

The Gascón campaign has highlighted a handful of controversial police shootings, including the killing of Brendon Glenn in 2015, and faulted Lacey for not filing charges.

Lacey, who was first elected in 2012, has countered by citing her own record of reform on mental health and on expunging marijuana convictions.